OH SO CLOSE IN KANSAS 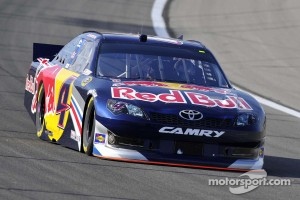 KANSAS CITY, Kan. — While Jimmie Johnson was attempting to set a land-speed record at Kansas Speedway, Kasey Kahne was doing the same. Only Johnson was already out front, and Kahne had to fight to get there.

An incident on pit road set Kahne back from his fifth-place starting position. Under the race’s first caution on lap 21, Kahne pitted for two tires, only to have the jack break and then be blocked on exit by Johnson’s car. So the No. 4 Red Bull Toyota team audibled for four tires and adjustments. Kahne restarted far back in 40th.

“We had a good Red Bull car,” Kahne said, “came in third that first stop and the jack broke, so we had to get a new jack and came out dead last and just kind of battled our way back up through there the rest of the race.”

From there, Kahne began his ascent as Johnson assumed the lead for the first of seven times. He led a race-high 197 laps. Kahne never led a lap, but he turned 27 of the fastest ones, which got him back into contention by the closing stages.

The fifth caution flag waved with 28 laps to go, and Kahne gave up the sixth position to pit for four tires and a splash of fuel. It turned out to be the right call by crew chief Kenny Francis, as Kahne quickly darted from 12th to fifth on the restart. Kahne disposed of the team cars from Penske Racing and found himself in second with 10 laps to go — 2.4 seconds behind Johnson.

Then the No. 4 team got the break it needed. Jeff Gordon’s No. 24 went up in smoke to set up a green-whitecheckered finish. Johnson opted for the outside on the restart, leaving Kahne pinned down low. Johnson set sail, Kahne cleared a gaggle of cars, made a valiant effort to catch Johnson but ended up .548 seconds short at the checkered flag.

“We had good strategy there,” said Kahne, who earned his best finish in nine starts at Kansas. “Kenny Francis did a nice job. We had a pretty fast Red Bull Toyota. Jimmie just beat me on the restart. I spun the tires some — he jumped a little prior to where I thought he would so he kind of beat me. Brad (Keselowski) gave me a good push. I had a good run and then he just kind of used the whole track up in (turn) three and I was in bad air and had no shot.

The guys did a good job. It was a good day for us and we’ll just keep working.” Sunday marked the second consecutive top five for Kahne, who also finished fourth Oct. 2 at Dover. It was his fifth top five and 10th top 10 of the season, and he also was the highest-finishing non-Chase driver for the second week in a row.

After starting 15th — the fifth consecutive time he’s qualified inside the top 15 at Kansas — teammate Brian Vickers spent the majority of the first half of the race fighting the “tightest car I’ve ever driven.”

A major wedge adjustment helped the No 83’s handling, but by then, Vickers was two laps down. Under a debris caution at lap 205, the team took the wave-around to get one of the laps back, and from there the afternoon became a battle to get back on the lead lap. He never got the free pass and ended up 19th at the stripe.

Kahne improved a position in points to 16th. Vickers remained in 26th.