Once Again Regan Smith Nails It On The Big Stage

After finishing third in Sunday's Brickyard 400, it is becoming apparent that Regan Smith and Furniture Row Racing like to perform on the big stage.

Prior to the 2011 season neither Smith nor the Denver, Colo.-based Furniture Row team had a top-10 result. But that has changed this season in a big way.

The 27-year-old Smith has secured top-10 finishes in four of NASCAR's crown jewels. He was seventh in the season-opening Daytona 500 (Feb. 20), won the Southern 500 (May 7 in Darlington, S.C.), was eighth in the Coca-Cola 600 (May 29 in Charlotte) and third in today's mid-summer classic at the famed Indianapolis Motor Speedway. 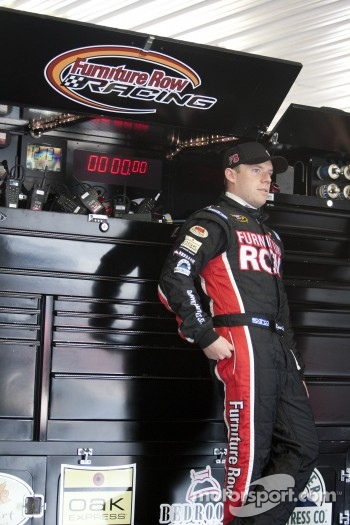 "We just have to figure out how to perform on the other stages," Smith said jokingly. "It was an awesome day and we're having an awesome year -- a credit to the entire Furniture Row Racing organization."

The smiles and fun reached another level for Smith when he crossed the finish line after conserving fuel during his final 33-lap, green-flag run.

Two weeks ago at New Hampshire in the previous Sprint Cup race, Smith ran out of fuel with a few laps remaining, spoiling a strong finish. But today the gamble paid off as Smith was begrudgingly saving fuel as he was approaching the leaders on the 2.5-mile oval.

"I wanted to push our Furniture Row Chevrolet a little harder and go for the win at the end," Smith stated. "But Pete (Rondeau, crew chief) kept on pulling me back. He kept on saying when I wanted to go, 'No, No, No, Save, Save, Save.'

"The competitive side of me wanted to take a chance -- it's hard for any racer to hold back when they smell victory. But the smart decision was to listen to Pete and you certainly can't be disappointed with a third. Pete and the crew did a great job today and they deserve this great finish."

Finishing ahead of Smith were Jeff Gordon (second) and race winner Paul Menard, a close friend of Smith.

"I am so happy for Paul, I know what he is feeling, especially at this place where his family has so much history," said Smith, who stopped by Victory Lane to offer congratulations to Menard.

The key moment for Smith came on Lap 121 when pieces of infield grass covered his radiator grill as he avoided Landon Cassill's spinning car.

The incident, which brought out a caution, forced Smith to come down pit road twice to clean off the grill. And on the final stop, the No. 78 crew used the opportunity to top off the fuel tank.

"That probably made the difference of having enough fuel," said Rondeau. "We lost track position due to the incident, but it also gave us an opportunity to go the distance while many of the other cars were forced to pit for fuel. A little luck plus a strong race car usually equals a solid finish. And that's how it turned out for us today."

Smith gained one position in the driver point standings.He is currently 26th, three points behind Jeff Burton for 25th place.