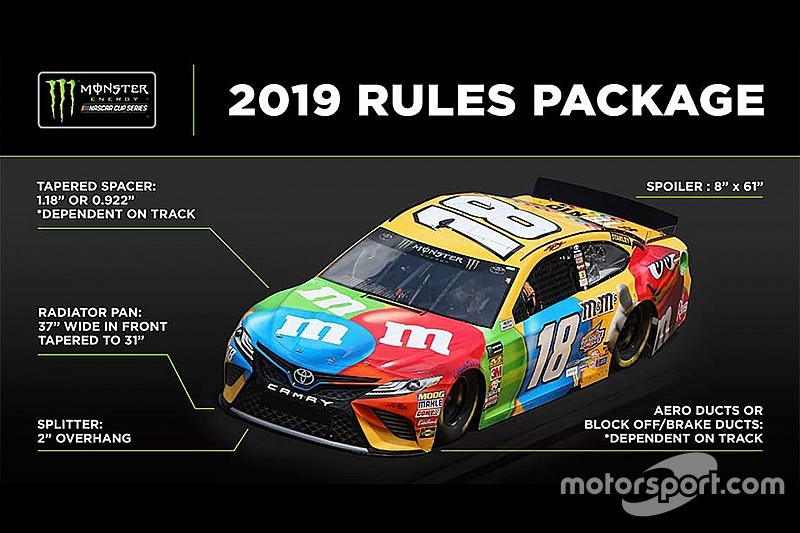 NASCAR unveiled its 2019 rules package on Tuesday and some aspects of it will be utilized in 22 of the 36 points-paying races in the Monster Energy NASCAR Cup Series.

There will be two primary packages and their use will be tailored to specific tracks.

A combination of a smaller tapered spacer to reduce engine horsepower to a target goal of 550 (about 150hp more than was used in this year’s All-Star Race) and front aero ducts will be used on a majority of speedways 1-mile in distance or more next season (17 total races).

Five other races will be run with the smaller taper spacer but with no aero ducts (both Poconos, Atlanta, Darlington and Homestead).

The baseline of each package features a taller rear spoiler, a larger front splitter with 2-inch overhang and a wider radiator pan. The baseline changes are designed to add downforce to stabilize handling – a change from recent seasons, which has seen NASCAR undertake multiple efforts to reduce downforce.

Both Talladega races and the July Daytona race will be run with tapered spaces instead of restrictor-plates for the first time since 1987.

Two other rule changsd announced for next season:

- The number of organizational tests for the year will be reduced from four to three. Goodyear tire tests will be conducted with three teams, down from four.

- NASCAR will expand the use of sealed engines next season, increasing to three long block seals in addition to keeping the current 13-race short block seal requirement.