RCR at Pocono ... In 116 starts at Pocono, RCR team owner Richard Childress has two wins, both of them coming with Dale Earnhardt, who won both in July 1987 and July 1993. Additionally, RCR has earned one pole, 16 top-five and 49 top-10 finishes at the uniquely-shaped three-turn speedway. Childress, a former driver in NASCAR's top division, contributed two of those top 10s from 1976-1980.

Get to the Points ... Following the Sprint Cup Series race at Indianapolis, Harvick ranks third in the championship point standings and is only 12 markers outside of the top spot. Bowyer remains 12th and is 32 points in arrears to the top-10 cutoff with six races remaining before the Chase for the NASCAR Sprint Cup commences. Menard's Brickyard 400 win advanced him where he now sits 53 points on the cuff of the top 10 while Burton remains 25th in the rundown, 73 markers behind Juan Pablo Montoya's 20th-place tally.

This Week's CertainTeed/Menards Chevrolet at Pocono Raceway ... This weekend, Paul Menard returns to Pocono with Chassis No. 347 from the Richard Childress Racing NASCAR Sprint Cup Series stable. This No. 27 Chevrolet Impala was a brand new addition to the RCR fleet for the 2011 season and was last seen on track at the uniquely-configured raceway, where Menard earned his season-best starting position of second and drove it to a 14th-place finish. This race also saw track time this year at Dover International Speedway where he brought home a 24th-place result after starting from the 20th position and at Auto Club Speedway where he started 15th and finished 16th. 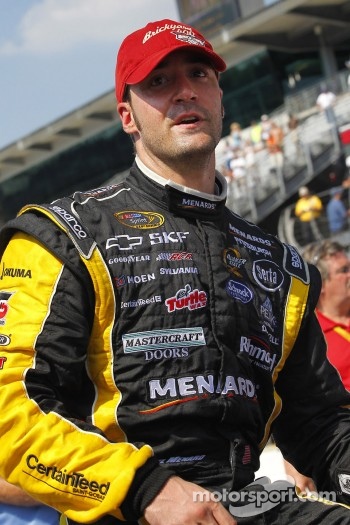 Menard now qualified for the Sprint Summer Showdown ...With last weekend's victory at Indianapolis Motor Speedway, Menard was crowned the first qualifier for the Sprint Summer Showdown presented by HTC EVO 3D. The Summer Showdown is putting $3 million on the line for drivers, their charities and one lucky fan in a six-race competition. Any driver who wins between Indianapolis and Bristol (the first five races) will become a finalist for the Labor Day weekend race in Atlanta (the sixth race). If one of those eligible drivers wins the Atlanta race, then the driver, the driver's charity and one lucky race fan each collect $1 million. Fans can enter for their shot at the big bucks each week at www.sprint.com/speed.

You've had a pretty busy week following the win at the Brickyard (Indianapolis Motor Speedway). How do you feel about going back to Pocono this weekend? "It has definitely been a crazy week, but so worth it. It's still sinking in, but now it's time to go back to work and focus on Pocono and the remaining races up to the Chase (for the NASCAR Sprint Cup). We've struggled there in the past, but we've had some decent finishes the last two times that we've been there. I think a top 10 is attainable. We qualified second there last time, but I sped down pit road and that cost us, especially at a place where track position is so vital. We had to keep fighting for the rest of the race. Everything goes back to minimizing mistakes and finishing races."

With the two events at Pocono Raceway so close together, if you did something well or not so well, is it better because it's fresher in your mind? "The track will always be different even though the races are only six weeks apart. The track will be in different condition than the last time we were there. The weather will also be different. You will just have to adapt and adjust to what it's like this time around."

Pocono is nicknamed the "Tricky Triangle." What is the trickiest part about Pocono? "Getting off the corners well and making it down the long straightaways."

Looking ahead to Pocono, are there more passing zones there than most tracks you go to? "Well, the race track creates that with the bumps and the asphalt being wore out. It's a fun race track to drive because you have options. With the race track being in the shape that it is, there's a lot of opportunities to make a lot of mistakes with your car sliding, bouncing, the tires falling off, everything that happens. I think from a driver's perspective, that's a good thing because you have an opportunity to make your car handle better and have those options to pass people."

Do you think your team has a good handle on Pocono? "We've run well there the last couple of years. I think as we move forward, we just have to keep doing the things that we're doing. We're not trying to reinvent the wheel. We just need to put ourselves in position at the end of the race. I know that we ran well, so we just need to keep doing that."

Explain why drivers like Pocono? "It's a fun race track to drive on because you have options. With the race track being the shape that it is, you have a lot of opportunities to make mistakes with your car sliding and bouncing and your tires falling off. I think from a driver's perspective that's a good thing because you have the options to make your car better and pass people."

Is the team done experimenting for the Chase? "I think we've raced pretty out of character the last six weeks. We need to get back to consistency and not take so many chances. I think our cars run well, but we just have to do some different things that we've gotten a little out of character that we've been doing." 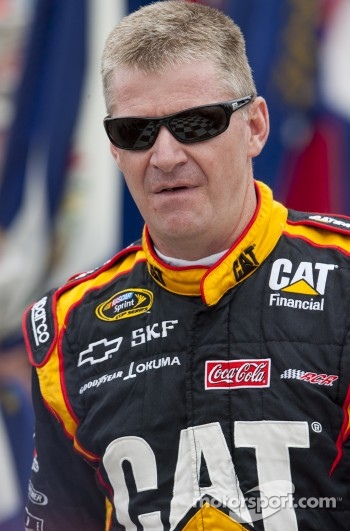 Welcome Home, Darin ... One member from the Cat Racing team hails from the state of Pennsylvania. Car chief Darin Nestlerode grew up in Jersey Shore. In addition to his mechanic duties on the RCR entry, Nestlerode also holds the sign board during pit stops on race day. He and his wife Paula reside in Kernersville, N.C., and are heavily involved in the Triad Bloodhounds, a non-profit organization that trains K-9's in various areas: tracking lost persons, criminal tracking, cadaver, water recovery, explosive detection, article searches and weapon detection.

Pocono seems to be a struggle for you. After finishing 20th earlier this year, can you turn that around this weekend? "Our finishes this year have not reflected how we've run and Pocono is no exception to that. We were definitely better than a 20th-place car. We actually ran out of fuel and got ourselves in a position that really hurt us. We ran much better than 20th, but we finished 20th. And, at the end of the day, where you finished is all that matters."

What are your thoughts about having two races there so close together? "I think it's good for the teams, but I don't know if it's good for the sport. I think it's a little easier for the drivers, but every time you go to Pocono it is completely different. I don't know why that is. You could go to Pocono and run there on Sunday and go back and race there on Thursday with a completely different set up. It makes no sense to me. It's one of those tracks that really change a lot from one race to the next. But, for the teams, I think the track is a lot fresher on your minds. I think that's a little better. Whether it's good for the sport and the fans, I don't know. It seems to me that it's expensive, and if we could spread that out over a period of time it might help the fans a little bit. Although, their window to watch races is smaller than a lot of other tracks because of their geographic location with weather and every thing else. I think for the fans it would be better if those races were spread out."

Pocono Raceway is called the "Tricky Triangle." What in your mind is tricky about it? "We talk a lot about the tunnel turn because that's kind of related to golf. It's like the drive. It looks cool; everyone takes a lot of pride going through the tunnel turn fast. Honestly, a lot of people don't get past leaving the tunnel fast. I think the most important places at Pocono are turns one and three. Those two corners lead to the longest straightaways. They are for passing opportunities. While all of the corners are very different, turn one is very rough. What's hard about it is it's just so different. You're going so fast entering the corners that it's hard to get your car slowed down correctly in order to get it rotated while hoping to have enough rear grip to get off the corner. Those are the biggest challenges."

This Week's Good Sam Club Chevrolet at Pocono Raceway ... Clint Bowyer will pilot chassis No. 333 from the Richard Childress Racing NASCAR Sprint Cup Series stable. This Chevrolet Impala, built new for 2011, has now seen action three times this season. This includes a top-10 finish of seventh at Auto Club Speedway in March and two 16th-place finishes in the NASCAR Sprint All-Star Race in May and Pocono 500 in June.

You had two top-10 finishes in a row and then backed it up with 15th- and 16th-place finishes. Did you lose a little mojo there? "I think we just lost the handling of our cars on that size of a race track. It was two weeks before Pocono in June that we started struggling. We're working on it. It's where we need to improve. Pocono is typically a good track for me and we have to get back to that and get a good finish. We've led laps there and I've felt like that's a track that we can win at. Last time we were there in June, we were way off. We're not going to bring that same package back this time."

With the Pocono races so close together, is it hard to get it turned around in that short amount of time? "Sometimes that can help you. The track is still fresh in your mind. You look back to the last time you were there and think what you could have done this. Well, that's still in the back of your mind. That goes for both the driver and crew chief. Sometimes, that's not always a bad thing."