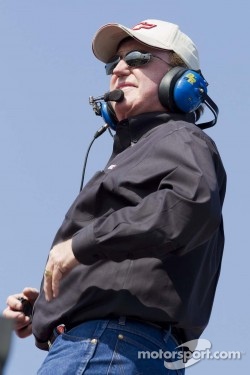 The NASCAR Buddy Shuman Award recognizes an individual who has made a significant contribution to the growth of NASCAR Sprint Cup Series racing. The award is named in honor of Louis Grier "Buddy" Shuman, a pioneer NASCAR driver who died in a hotel fire in 1955. It has been presented by NASCAR and Federal-Mogul's (NASDAQ: FDML) Champion® spark plug brand. Previous winners include Bill France Jr., Richard Petty, Dr. Joe Mattioli, Rick Hendrick, Dave Marcis, Dale Inman, Robert Yates and Jim Hunter.

"It's a great honor to receive the Buddy Shuman award," stated Childress. "To have my name associated with previous award winners such as Richard Petty and Bill France Jr., who are heroes of my past, is very special. I would also like to thank Federal Mogul and Champion spark plugs for sponsoring this prestigious award and everything they have contributed to this sport."

Childress was presented the Humanitarian of the Year Award at the 2008 NASCAR NMPA Myers Brothers Luncheon for his and his family's efforts to establish the Childress Institute for Pediatric Trauma. The Childress Institute's goal is to pave the way to help save the lives of severely injured children and help those who survive on the road to recovery.