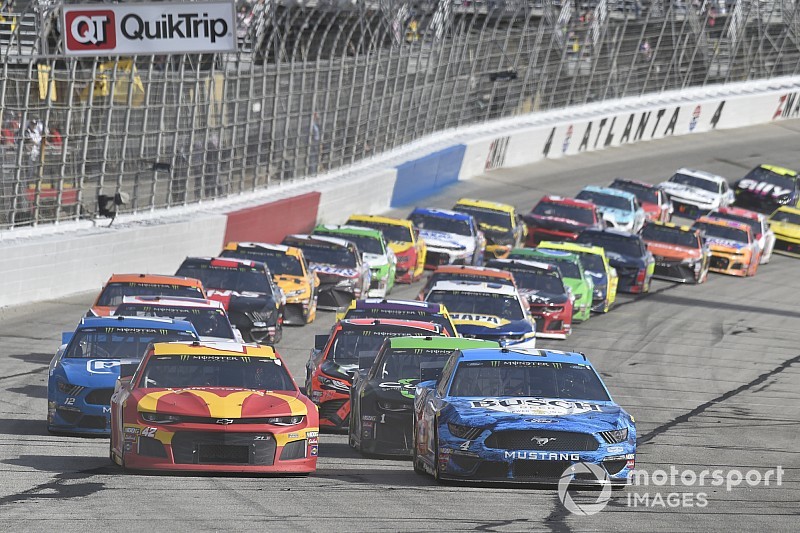 Every week Motorsport.com's Jim Utter, Nick DeGroot and Tim Southers take on the newsworthy topics in the NASCAR world.

What did you think of the Cup Series race at Atlanta that incorporated some of the new rules for races on 1.5-mile tracks?

Jim: Regardless of the rules, Atlanta's worn pavement and tire fall-off still dominated the strategy in the race, but it was clear in two ways the rules made a positive impact. First, restarts were incredible, with cars going three and once, four-wide. And second, the race leader rarely had the chance to run away from the rest of the field. And at the end, the second place car was making serious inroads at running down the leader. I think we'll get a better idea at Las Vegas, but I think it was a solid Atlanta race.

Nick: I enjoyed it. I don't see it as a true test of the new package as it was only partially implemented so I won't bother commenting on that, but I did like the race. There was plenty of action and some good battles with a close finish to boot. I am cautiously optimistic for Vegas though and hope we see a similar race and not a train of cars.

Tim: Except for the wild restarts which were exciting, the Atlanta race to me was a typical one for the track. Tires fell off and the usual fast cars were fast and the finish was a typical close finish for the win. The biggest difference I noticed was the leader didn’t build huge leads like we’ve seen in the past. I expect we’ll see a different race this weekend in Las Vegas.

How surprised were you with Hendrick Motorsports' performance in Sunday's Cup race?

Jim: That is probably what stuck out to me the most about Sunday's race. Hopefully it doesn't turn out to be the case, but Atlanta almost seemed like a repeat of a year ago when the Hendrick teams showed up at Atlanta and saw how much they lacked in performance. However, Jimmie Johnson had a solid test at Las Vegas, where the rules are slightly different, so I wouldn't use Atlanta are a true gauge of how the season will go.

Nick: Yeah, their struggles would have been less surprising if the other Chevrolet teams weren't so good. Even JTG had a real chance to get a double top-ten until a late incident on pit road. But still, it's early and not time to panic yet. It's all about how they perform with this aero package at Vegas and then we can make a better judgement of where they are at.

Tim: I was surprised especially after their results in Las Vegas. I hope it’s not a sign of things to come for the team after their struggles early in the season last year. With the entire rules package to be used this weekend in Las Vegas so I don’t think there is any reason for any team to panic about - just yet.

Do you think we'll see anything different from Atlanta to Las Vegas this week with the implementation of the complete rules package for the Cup Series cars?

Jim: Judging by what I witnessed at the Las Vegas test last month, I think the racing at Las Vegas will look much different than Atlanta. First, there is much less tire fall-off and the front air ducts should make drafting play a far more prominent role in how the race plays out.

Tim: I have to agree with my colleague Jim Utter since he attended the test last month in Las Vegas and covered it for Motorsport.com. The track, although also a 1.5-mile speedway just like Atlanta, will race completely differently. I’m looking forward to the race and can’t wait to see how it turns out. To me this year is one of the most important in decades for the sport and this could set the tone for many races at 1.5-mile tracks.

Christopher Bell showed pure domination last weekend in Atlanta. Do you think he will continue that in the Las Vegas Xfinity race or will another driver stepping up to contend?

Jim: I'll say it now - the path to the 2019 NASCAR Xfinity Series championship is going through Christopher Bell. And I believe Atlanta was just the first taste of what's to come from Bell and the No. 20 Joe Gibbs Racing team. I was impressed, however, with the runs by Tyler Reddick and Cole Custer at Atlanta. Right now - and it's early - they look like Bell's top competition this year.

Nick: I wouldn't bet against Christopher Bell anywhere, but Kyle Busch is back this weekend. He will likely be the driver to beat and even Bell will find a difficult fight there. Austin Dillon and Cole Custer are the other drivers I'd look out for.

Tim: Judging by his performance last weekend in Atlanta if a driver wants to win the 2019 Xfinity Series they’ll have to beat Christopher Bell to celebrate in November. Joe Gibbs Racing has always been a top performing team in the series and the skills shown by Bell make them a team to beat this season.