NASCAR Roundtable: Where does the Chicagoland finish rank? 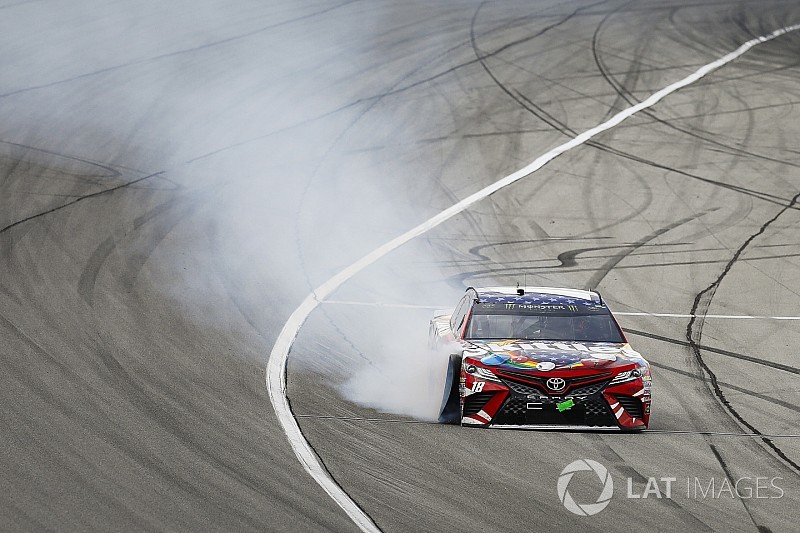 Motorsport.com's NASCAR team discusses the exciting finish from Chicagoland and rates it against some of the most memorable finishes in NASCAR history and other topics in this week's NASCAR Roundtable.

There's still a buzz over the finish of the NASCAR Cup race at Chicagoland on Sunday. How important was that finish to NASCAR right now?

Jim: Anything that gets the general fan base - and media - talking about the actual competition is a plus in my opinion. When the racing often gets overshadowed by peripheral issues - both big and small - that doesn't say much for the quality of the product. Sunday's race showed that good racing is still possible with the current rules as they are but the bigger problem is that it's much harder to replicate the conditions (worn track surface, hot temperatures, day race, etc.) that likely were the biggest contributors to the outcome.

Kenny: NASCAR needs as much as it can possibly get in terms of positive news from the race track. Lost in the talk of ratings and attendance woes have been a lack of dramatic finishes or incidents that would keep fans talking about the sport for the next week. The Chicago finish won’t save NASCAR but it will remind fans of at least one of the reasons they became fans in the first place.

Nick: Oh it was so refreshing. Things had gotten a bit stagnant, but that race and finish was everything we watch NASCAR for. It also showed that in the end, it doesn't matter who is winning as long as the show is exciting. Kyle Busch is one of the 'Big Three' and is not really the most popular driver out there, but 9/10 people walked away smiling after that one. As he said, "if you don't like that kind of racing, then don't even watch." The new commentary booth was also refreshing and made for a memorable event that will hopefully carry over into Daytona.

Tim: I think it was very important to give the fans something to talk about and the sport to have a ‘buzz’ that it hasn’t had in a while, honestly. The finish is and will be one to remember for a long time and one that many new fans I feel needed to see why there are so many passionate fans in the sport.

2. Where would you rank that last lap against some of the other classic 'last lap' battles in the history of NASCAR?

Jim: In terms of actual competition - in other words not including post-race fights and things of that nature - I would have to say it ranks in the Top 10 of all time. As a fan of stock car racing, it would be hard to argue you didn't get to see almost everything you could have hoped for - uncertainty of the outcome, back-and-forth lead changes on the last lap and a little beating and banging but nothing out of bounds. In fact, I believe Sunday's race was one of the best in terms of competition from start to finish.

Kenny: It’s no Daytona 500 of ’79 or Bristol night race ’99 but it doesn’t have to be. It was an exciting finish between two of the series’ best competitors. There have been quite a few last-lap passes for the win and end-of-race battles (that were not the result of restarts) that helped build the sport. The Chicagoland finish should be recalled as one of the best in recent seasons

Nick: There are some finishes that just stick with you and this is one of them. Auto Club '13 is probably what I would equate it too -- an incredible battle culminating in one car spinning and another in the wall as, coincidentally Kyle Busch drives off with the win. No question it's one of the top-five Cup finishes from the 21st century. I'd still put Craven/Busch at Darlington '03 as No. 1 since the turn of the century.

Tim: I just turned 50 years old and I’ve been watching, listening and going to races since I was seven years old and while I think nothing will ever top the 1979 Daytona 500 in terms of significance for NASCAR - this finish was needed. I think it will easily become one of the top-10 finishes of all time in the history of NASCAR Cup Series racing.

Aric Almirola has already won a July race at Daytona and came half a lap away from winning the Daytona 500 in February. Do you think he could score a 'redemption' victory this Saturday night?

Jim: Almirola certainly has to figure into the mix for possible winners on Saturday night. He has proven himself to be a strong restrictor-plate racer and, if anything, his development as a driver has increased dramatically the longer he has been with the Stewart-Haas Racing organization. Remember, at the Daytona 500 he was only making his first start for SHR. So much has already changed for him in the relatively short time since.

Kenny: Almirola proved at Chicago that much like Clint Bowyer, his team isn’t content to ride in the shadow of teammate Kevin Harvick. Almirola is a solid restrictor-plate racer so he’s not to be overlooked. I doubt he feels Daytona “owes him one” but I’m sure he’ll go there expecting to contend for the win.

Nick: This is Daytona. If you are in the race you got a chance. Almirola has shown the ability to rise to the occasion at plate tracks before though, not just this year's 500. His lone Cup win came at the July Daytona race and with that SHR power, he should be a threat.

Tim: Almirola was already a good restrictor-plate racer before he joined forces with the strongest team in NASCAR this season. While he did come up just short in February, he has already won this race before and now he has half a season under his belt with his new crew chief and team, I fully expect him to challenge for the win on Saturday.

The 'Big Three' - Kevin Harvick, Kyle Busch and Martin Truex Jr. - have dominated much of the season. Does someone from that group win yet again on Saturday night?

Jim: As much as I would like to say we'll have a new winner Saturday night, it would not surprise me if Harvick, Busch or Truex came away with yet another win. This group is so good right now that is hard not count them in contention for any race on the schedule. Both Clint Bowyer and Kyle Larson (even though he doesn't have a win yet this year) are very close to joining this group. In fact, I believe this year's championship will be decided among the five drivers I just named. It's hard to see someone else suddenly appear on the scene good enough to keep pace with these guys until Homestead.

Kenny: It’s a restrictor-plate race so anything can happen and probably will. But I don’t think their success this season earns them any role as favorites at Daytona. It’s going to depend on who makes the right decisions at the right time, and who works well with others. If I had to pick a winner I’d likely choose someone who has yet to win this season and needs to solidify their playoff status.

Nick: This is the best chance of the year outside of Talladega to have a new or interesting winner with the unpredictability of plate racing, so no, I don't think luck will shine on our 'Big Three' Saturday night.

Tim: As much as I hope we see one of the ‘young guns’ break through the second half of the season and score a handful of wins, I think you would have to be crazy not to pick one of those three drivers in every race the remainder of the regular season. Daytona usually produces surprise winners and we could see that again on Saturday, but I think we’ll see all three contend for the win unless they get caught in an incident on the track.

NASCAR may have found the perfect answer to its inspection issues