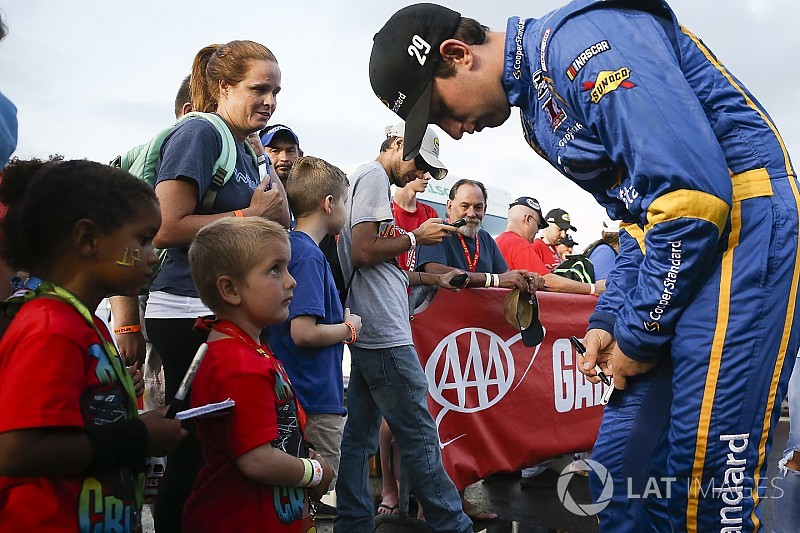 Our team of experts debate some of the biggest questions in NASCAR this week.

The Darlington Throwback weekend has proven to be one of the most successful promotions in recent memory for NASCAR. If you had the opportunity, what would you do to help educate young fans about the sport?

Jim: I think all race fans under the age of 16 should be given free admission to the NASCAR Hall of Fame with a paid adult admission. It is by far the best place for any race fan to discover and learn about NASCAR's past. Other than that, NASCAR and tracks need to continue to work to make the at-track experience easier for fans to access and more enjoyable. No matter how good the view on TV, a NASCAR race cannot be truly appreciated until experienced in person.

Lee: My teaching moments would include the advancements in technology and safety over the last six decades. From the cars to the racetracks, a lot of gifted minds have worked together throughout NASCAR’s evolution. But the sport wouldn’t be where it is today without the people. It’s been the personalities on and off the track that has capture the attention of fans and their stories should continue to be told.

Nick: For me, I became fascinated with the sport by learning about the history and seeing some of the most iconic moments from days long past. NASCAR can't forget the past, but they also must work to make the rising stars household names: this is critical to attracting new fans and the overall health of the sport.

Tim: I like the promotion recently of kids free with paid adults for Xfinity and Truck races. Also, programs like STEM have brought NASCAR to a lot of young people that might not have ever heard or been around the sport. My take is a little different though because I feel we need to get their parents interested in the sport because if we can do that then they will likely bring their kids with them. I would look at ways of getting the parents interested in the sport too.

Jeremy Clements' win in Sunday's Xfinity race was quite a popular win. How surprised were you that the underfunded, family-owned team pulled off the win?

Jim: To watch the race unfold was incredible, especially because everything had to go just right for Clements to get in position for the win - and it did. And then he spun as well after contact with the leader but third-place was so far behind, Clements still had time to re-fire, get back on the track and take over the lead. Superspeedways and road courses truly are equalizers, which is why I believe fans enjoy them so much. Anyone can win.

Lee: Extremely surprised. All the pieces came together for Clements last Sunday. While road courses have a tendency to be equalizers since aerodynamics don’t come into play to the same degree as speedways, he was racing against his peers. The only Monster Energy Cup Series racers in the field were former and part-time drivers. Still, that shouldn’t detract from Clements accomplishment which was well received with fans and throughout the sport.

Nick: It was spectacular. Few things are better than watching the underdog prevail. It's part of the reason I love road racing: There's always more strategy, closer racing and opportunity for surprise winners such as what we saw at Road America.

Tim: I was very surprised to see Clements get the win, but at the same time I was happy because the sport needed a story like this one. It seems all anyone hears or reads about in NASCAR these days is money. Whether you need it, have it or don’t have it, that is all that seems to dominate headlines. To see an underfunded team, especially a family-owned team which is what the sport was built on initially, is the feel-good story of the season for me.

Every year the NASCAR Camping World Truck Series, Canadian Tire Motorsport Park has produced an action-packed race. Do you expect the same this weekend and who do you think will win in Canada on Sunday?

Jim: The races at CTMP have all been great and adding Stage racing in the mix is only going to up the ante, in my opinion. This is crunch-time in Trucks to make the playoffs and there are several drivers who have been waiting just for this race for their best opportunity to win their way in. I will be disappointed if the lead doesn't change on the last lap.

Lee: Absolutely. The truck race at CTMP never disappoints. The only former winner in the field is John Hunter Nemechek, whose controversial move on Cole Custer on the last lap gave the driver of the No. 8 the win. This year, my money is on Austin Cindric who started on the front row last year but finished 23rd. I think his road racing experience combined with lessons learned in Bowmanville last year will help him tremendously.

Nick: Of course. It's part of the reason why NASCAR fans love road courses. It will be a wild race with a thrilling finish. But with that being said, it will be hard to top what we saw in 2016.

Tim: I was fortunate enough to be at the first Truck race at that track and there was fireworks at that finish too. I fully expect the same this Sunday and frankly, I would be upset and very surprised if we don’t see another pass or ‘bump’ for the lead in the final turn again this weekend. John Hunter Nemecheck will be the only previous winner in the field and with playoffs coming up and a lot of drivers hungry for the win, I expect to see fireworks.

With attendance dwindling at certain tracks, do you think NASCAR should look at other facilities when the next round of sanction agreements are given out when the current five-year agreements expire?

Jim: That would be great but I doubt it's practicable. The No. 1 thing any facility has to have is SAFER barriers and most facilities not used by NASCAR now don't have them and they are very expensive. Add to that the cost of the race purse a track has to provide and the options to host new races - especially in the Monster Energy NASCAR Cup Series - become very, very limited. The only way possible a Cup race is ever going to show up at a smaller venue, in my opinion, is if a TV network is willing to provide the additional funds to host it as a made-for-TV event. The idea NASCAR is suddenly going to go small tracks around the country is pure fantasy.

Lee: No doubt about it. We all know the politics involved with awarding race dates. But is NASCAR really being best served by attending the same tracks over and over again and getting the same results? NASCAR can no longer expect the fans to come to them. The sport needs to reach out to the fan by expanding to new markets. The IndyCar event at Gateway Motorsports Park last weekend was a perfect example of the league, the track and the community coming together. That type of pre-race buzz has been missing at recent NASCAR events.

Nick: Again, the schedule needs fixing. You fix the schedule, and a lot of the issues people complain about with the on-track product will dissapear. More diversity is needed and less 1.5 milers would be a very good start. NASCAR needs to do this, however, I doubt we will see any large-scale changes.

Tim: While I wish it wasn’t true, I must agree with my colleagues in that I think we’ll never see a mass move to short tracks in the Cup Series. I think the ship has sailed on a lot of those ideas as you have two major groups, ISC and SMI, that basically have a monopoly on the race dates. However, there is a sliver of hope as SMI announced that they are looking at operating the old Fairgrounds Speedway in Nashville. But, I highly doubt you would see them take a race away from Bristol and put it in Nashville.