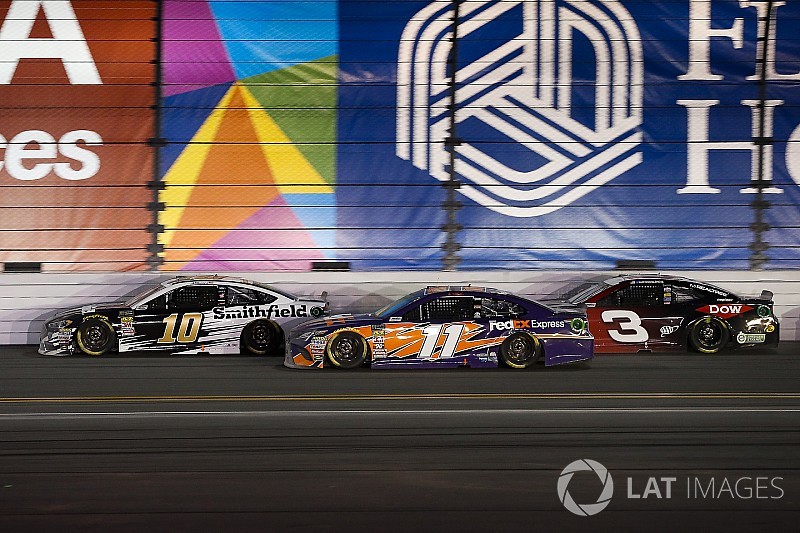 The NASCAR team at Motorsport.com have plenty to discuss after a wild Daytona 500 that kicked off the 2018 Monster Energy NASCAR Cup Series season.

Austin Dillon's race-winning move on Aric Almirola has been a point of controversy after the Daytona 500. Was it dirty or just a racing a deal?

Jim: Just restrictor-plate racing. Not even Almirola argued with the result because he admitted he was blocking. There is no rule barring blocking of course but whenever you do it, you run the risk of putting yourself in position to be wrecked. Neither driver had a choice, in my opinion. If Almirola doesn't block, he gets passed. If Dillon doesn't move Almirola on the block attempt, he hands the trophy to Almirola. You do whatever it takes to win, but you also have to live with the consequences. In this case, it was exactly what I would expect to see.

Lee: Both drivers agreed it was the last lap of the Daytona 500 and simply racing. Almirola put on the block in an attempt to maintain the point but Dillon had a run and was not going to lift.

Nick: It wasn't clean, but Austin Dillon did nothing wrong. He had a huge run and Almirola went to block, as is his right. Dillon moved low, and so did Almirola. Dillon then shifted back high, as did Almirola again. You can't block and move across somebody's bumper like that without calamity and thats' exactly what happened. It was just a racing deal. You don't lift on the last lap of the Daytona 500.

Tim: I think the final lap of the Daytona 500 (and the final lap of Stage 1) is just a product of restrictor-plate racing and the rules that exist for the race. Do I think Dillon got in to him twice, yes, but I feel that the last driver to compete in the No. 3 car in the Cup Series would have done the exact same thing on the final lap.

We saw two big wrecks in both stages due to aggressive racing up front. Did you find it strange that drivers were going so hard for stage points with a 500 win on the line?

Jim: No. Wasn't that the point of introducing the stages in the first place? Nobody can argue they have produced exactly what was expected of them. I think some people doubted it would translate over to superspeedways, but clearly it has. As Kevin Harvick mentioned more than once during Speedweeks, you can't afford to leave points on the table.

Lee: The field watched the points add up quickly for Martin Truex Jr., last year and many made note of saying during the postseason and prior to Sunday, they would actively be trying to accumulate more points. Still, seven-time Cup champion Jimmie Johnson was shocked to be sidelined after 59 laps. “Just racing that hard coming for a green and white checkered flag," Johnson said. "I’m not sure everybody was thinking big picture and really using their head through that.”

Nick: Any other plate race, I wouldn't be surprised. But I thought they would be more cautious considering it was a 500 win on the line. It just shows how much these drivers value those stage points after seeing what Truex did last year, and for many of these teams, plate races are their best opportunity to get a stage win.

Tim: While it might have been early in the race, I would hope fans were happy to see the drivers racing as hard as they were during the entire race. That is what many fans wanted and I feel that’s why the stages were created. I just hope they race that hard at other tracks, the biggest difference will be the cars will not be in a pack like they are at restrictor-plate races.

Which driver impressed you the most in Daytona 500?

Jim: Ryan Blaney's improvement over last season - and dominance for much of the third stage - I thought was impressive. And honestly I expected him to be even more competitive on tracks other than the superspeedways. I was also impressed by Paul Menard. He has been solid in restrictor-plate races in the past, but he seemed very competitive throughout the entire race and especially comfortable in what was his first points-paying race with the Wood Brothers. It will be interesting to see how well that group performs at Atlanta.

Lee: Ryan Blaney, for sure. I think the comment was made by a fellow competitor along the lines that great equipment had helped turn the new driver of the No. 12 Ford into a great superspeedway racer. But he held his own at the point for 118 laps and his only mistake was taking out defending winner Kurt Busch, which he apologized for on Twitter. "First off I can’t thank the whole 12 team and Menards enough for what they do. That was an incredibly fun speed week. Probably the hardest I’ve ever driven. Shame we came up short. Want to end with an apology to the 41 group. Just racing hard in a bad spot and I’m to blame."

Nick: Darrell Wallace Jr. would be my choice. He drove a smart race. He got a little antsy in the early laps when he found himself one position shy of the lead, but he settled in and focused on making it to the end. He did a nice job dodging the wrecks, especially as he slid sideways through the Kurt Busch melee at the end of the race. And at the checkered flag, he brought home a remarkable runner-up result for Richard Petty Motorsports, and gained a lot of new fans in the process.

Tim: I agree wthat Ryan Blaney was the strongest looking driver and car for the majority of race until he got involved in the late caution. I think the move to Team Penske will prove to be a very good one for Blaney, who I predict will win multiple races this year.

How big a deal was Austin Dillon's win on Sunday for him and Richard Childress Racing?

Jim: Huge! Last year was a big step for RCR, with both Dillon and Ryan Newman winning a race. The organization still had to take further steps forward this season to become consistent contenders for race wins. The one thing the 500 victory did for RCR was to connect their current group of drivers to the organizations storied past, which helps all involved.

Lee: To deliver the company's third Daytona 500 from the third generation was quite the accomplishment. The momentum will carry the team all year and into the Chase. What was equally impressive, however, was the performance of ECR engines. The company powered five of the cars in the top 10 and that is huge for a group that prides itself on speed.

Nick: It's a massive boost for the team. From a championship perspective, they now have one car that they don't have to worry about. Austin Dillon is now locked into the Playoffs. Beyond that, to win the Daytona 500 is going to give that team so much confidence and morale heading into the coming months. ECR engines also impressed, taking half of the positions inside the top ten.

Tim: I think it’s big for the team and shows the importance of getting Andy Petree involved with RCR again. As Lee reported earlier this week on Motorsport.com, the more impressive fact might be the performance of ECR Engines for the RCR and other teams competing in the Daytona 500. Momentum is so important in NASCAR and RCR has plenty of it after the season opener which should help them the rest of the year.

A lot of people in NASCAR feel that the 'season' really begins this weekend in Atlanta. Do you agree and who do you think will perform well this weekend at the first intermediate track race of the year?

Jim: Clearly, a more traditional 1.5-mile track is a lot more indicative of how a team will fare throughout the season and I think the next few races - Atlanta, Las Vegas, Phoenix, Auto Club and Martinsville - will help separate the contenders from the pretenders. I'm curious to see how the new Camaro works for the Chevrolet teams at Atlanta. If it's as good as the preseason test at Las Vegas, the championship picture could really get a shakeup this season.

Lee: Martin Truex Jr. won seven of 11 intermediate track races last year. I expect him to equally stout in 2018. Also, Kevin Harvick and defending Folds of Honor winner Brad Keselowski from the Ford camp and the Chevy of Jimmie Johnson, who will be looking to put the 500 in his rearview mirror.

Nick: Yes, I do. Daytona is its own animal. I will be very interested to see which teams have the upperhand this weekend, especially since it's a 1.5-mile track. Those sort of tracks are where the majority of the season take place and ultimately decide the champion.

Tim: I agree as a majority of the races are held on this size track throughout the season. Based on his 2017 performance, I feel Martin Truex Jr. is the man to beat on intermediates, but I believe Chase Elliott may score a very popular win this weekend on his home track.