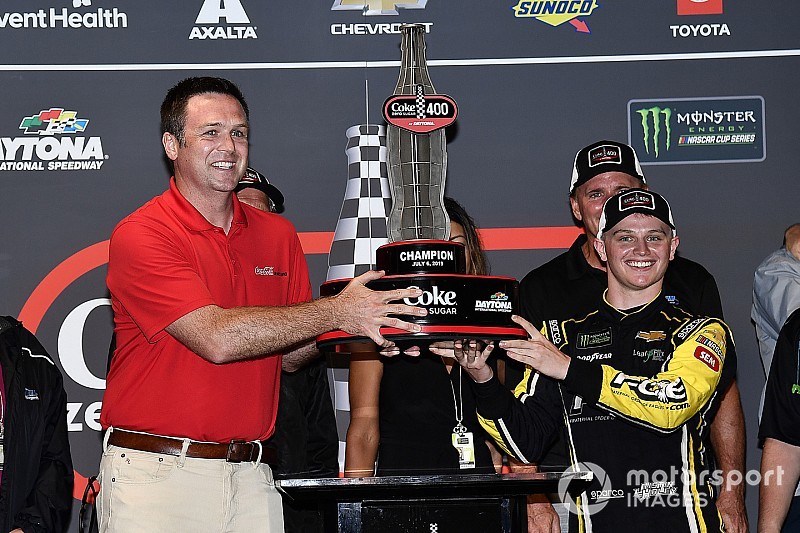 On this week's edition of the NASCAR Roundtable, we talk a dramatic race weekend at Daytona and the playoff outlook moving forward as the Cup Series crosses the halfway point of the 2019 season.

The finish of the rain-delayed race at Daytona International Speedway was one to remember. What are your thoughts on how the event ended with the winner, weather and outcome?

Jim: I really didn't have any problems with any of it considering the restraints NASCAR was under. There was no way NBC was going to start the race at 11 a.m. in conflict with the Women's World Cup Final, and it is likely that if they did we would have gotten the whole race in before any storms. But if race fans want live coverage of every Cup race, TV scheduling conflicts - especially on rainouts - is what they have to live with. Once started, I also don't have a problem with NASCAR waiting 2 1/2 hours (and it was still raining at the time which means more hours of track drying) before ending the race. If it was the actual race day that is one thing, but when you are postponed a day, we're lucky they didn't pull the plug on the first rain drop. I've already made my feelings known on the uproar of the No. 77 winning - get over it people, they outsmarted all your high-financed and higher-profile teams.

Nick: I have few thoughts. First, blocking once again leads to another huge wreck. Now first let me say that I don't blame Austin Dillon for attempting to block Bowyer's move. With the rain on their doorstep, he couldn't just give it up without a fight, but how many wrecks could be avoided if drivers didn't throw reckless blocks while the pursuing car is already alongside? Just seems to happen too much lately. Anyway, the weather at Daytona in July was, as always, unpredictable. My only gripe is that I think NASCAR should have held out longer. It appeared there may have been a window to get in those 33 laps later that evening but with the unpredictability of weather that time of year, who knows. As for the controversy surrounding the winning team, I get it but I don't think it's as grim as it's been made out to be. I don't see it as a black eye or an embarrassment to the sport, but rather a situation where someone jumped at an opportunistic deal (grabbing the No. 78 charter) and made a smart business move. And now they've won a race through incredibly lucky circumstances. I don't think the conflict of interest with their presence is as big a problem as others believe it to be. It's a bizarre upset story and won't affect the championship in any way as neither the driver or team are currently eligible.

Tim: As a former track promoter weather often puts you in a no-win situation and that is what happened on Sunday. Fans are emotional and I get that, but fans also don’t have to think about all the aspects of situations. NASCAR and Daytona International Speedway - from a legal standpoint - are almost forced to adhere to a strict policy on lightning (as are many other outdoors sports) so that is understandable. The race being called is an issue that really is a no-win situation. Unless fans want a true pay-per-view system (which they would riot over) there is no reasonable way to ask a network to hold it’s programming hostage indefinitely.

Do you think the charter system in the Cup series has worked as intended?

Jim: I think it has done several good things - helped teams who own one get a guaranteed, predictable income from each race and also giving owners something of value for their team other than just car parts and a shop. The one thing it hasn't done much of is attract or entice owners and investors from outside the sport to get involved. In retrospect, the creation of the charter system seems to have done more to help teams already in NASCAR remain viable, but considering the downward spiral that was going on for a while, that's not necessarily a bad thing.

Nick: I agree with Jim for the most part. It really hasn't attracted much in terms of outside attention, but put more money in the pockets of the current teams. I won't attempt to speak to it much beyond that but surely improvements can (and need to) be made to the current business model of the sport.

Tim: I think the Charter is a good system to protect and give existing teams an opportunity to at least plan a general budget as they are now guaranteed a sum of money for each race. I think the Charter system is also limiting new teams to come into the sport as there are only limited numbers of charters available. Of course, one could also argue it’s not if what owners at Spire stated on Sunday they tried to sell the charter they wound up buying because there were no takers.

Only seven Cup series drivers are locked into the playoffs right now by wins entering this weekend's race at Kentucky, meaning most of the 16-driver field could be filled by drivers through points alone. How many more new winners do you expect before the playoffs start?

Jim: I really don't expect more than one or two more new winners - my best guesses are William Byron and Kyle Larson - which means nearly half of the playoff field could get in by points - something that could really shakeup how the playoffs actually play out. And it would not surprise me to see one of the drivers enter the playoffs without a win, but catch fire with some once they get in there - similar to Tony Stewart several years ago.

Nick: Byron has been getting close if we're talking first-time winners, but there are so many drivers who haven't won that will all expected to so far. Kurt Busch, Kyle Larson, Jimmie Johnson, the entirety of Stewart-Haas Racing are all strong candidates to get a way before the regular season comes to a close.

Tim: I expect Kyle Larson and Kevin Harvick to be at least two drivers who should win a race before the playoffs start. I think we could also see a surprise or two with William Byron, Ryan Blaney and Kurt Busch also scoring a win before the playoffs begin in Las Vegas.

The truck playoffs begin in almost a month, who do you think will make the playoff field that might surprise race fans?

Jim: It would not shock me to see Sheldon Creed step up in the next could weeks and pull off a victory. He has clearly shown he has the speed to contend this season and has been in position to challenge for wins. If he does, there are going to be one or two big names left on the outside looking in this year when the playoffs begin.

Nick: Ross Chastain has already been a huge surprise and he's knocking on the door, just needs a few more points to crack the top-20. Other than him, Sheldon Creed is probably the biggest surprise.

Tim: I have to agree with Jim that Sheldon Creed is probably the best ‘surprise’ to make the playoffs. He’s in great equipment at GMS Racing and has shown a lot of speed in races. He’s just had some bad luck getting involved in on track incidents - some of his own causing and some not - that has kept him out of contending for a win so far this season.