NASCAR Roundtable: Will Johnson end his slump at the Monster Mile? 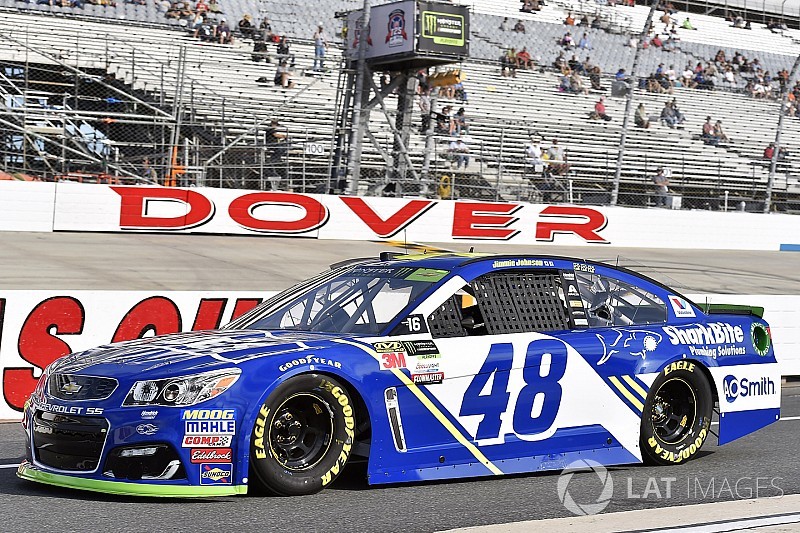 Can Jimmie Johnson break out of his slump this weekend at Dover and will Elliott Sadler claim his third 'Dash 4 Cash' bonus?

Jimmie Johnson has an unbelievable record at Dover with 11 NASCAR Cup Series wins in just 32 starts for an average of a win in every 3 starts. Is this Johnson's best chance at a win this season?

Jim: It's difficult to say if Dover is Johnson's best chance at victory this season but if he doesn't run well, it's certainly a sign it will be a very long season for the No. 48 Hendrick Motorsports team. Even last season, which was one of Johnson's worst so far in his career, he still posted a win and a third-place finish in his two Dover races. Given that, I would expect Johnson to be in contention at Dover this weekend as the Hendrick organization has made some gains since the end of last season.

Nick: Johnson's past performance says Dover is a place he should excel at, but we thought the same for Martinsville and he struggled there. If he isn't in contention, that's very telling about where Team Hendrick is right now. But in my opinion, I don't see the No. 48 taking the checkered flag this weekend.

Tim: I think this is the best shot for Johnson to show that is could be the equipment that’s maybe a little off or they are still adjusting to all of the changes with the new car, because no one in this generation has performed better at Dover than the seven-time champion. I still think he will win this season, if not at Dover, somewhere else, but his performance this weekend I think will give a good indication of where he and his team are at so far this season.

Tom: More than his Dover record, Chase Elliott's resurgence has to give Johnson hope that he can latch onto the upturn in form that Hendrick is having. If he can match that at a track he's always gone well at, Johnson could well break his run of poor form. The stats are promising and an early season win at Dover would allow breathing space to get on top of the gremlins and mount a proper title charge like we all expect.

Daniel Suarez has scored back-to-back top-10 finishes for the first time this season and enters Dover where he finished eighth last fall. Can he make it three straight top-10 finishes in a row?

Jim: After a slow start to the 2018 season, Suarez and his No. 19 Joe Gibbs Racing team seem to have hit on some consistency. He's got a pair of Top-10 finishes in his last two starts and he finished 11th at Bristol the week before that. I certainly think another top-10 is possible at Dover this weekend. Dover was one of Suarez best tracks in his rookie season, posting sixth and eighth-place finishes in two starts. In six Xfinity starts at Dover, Suarez has one win and five Top-10 finishes.

Nick: I see no reason why not. Suarez is a consistent, reliable driver and he's already proven himself at Dover in the past. In fact, we may see him inside the top-five and battling for his first Cup win by race's end.

Tim: I think Suarez is on the verge of a breakout season and should content for wins this season. The team has shown steady improvement throughout the season and I think as long as he doesn’t get caught up in an accident at Dover will be in the top-10 on Sunday.

Tom: Daniel Suarez is keeping up the knack of running well and avoiding trouble, and he's returning to the track that he impressed at last year. Suarez is having a decent sophomore year in 2018 and I'd expect another top 10 finish to arrive.

The CWTS returns to action this weekend after a six-week break. There have been four different winners in as many races this season. Could we have a fifth different winner this season at Dover and who do you think is most likely to score the win?

Jim: I think it's almost a given there will be a fifth different win in Trucks this weekend - there simply are a lot of drivers capable of winning who have yet to reach Victory Lane this season. I think the most likely candidate for a win is Kyle Busch Motorsports' Noah Gragson. In the last two weeks, Gragson has made his first two Xfinity Series starts with Joe Gibbs Racing. He finished second and fourth in the two races. He'll be doing double duty this weekend at Dover, running Xfinity as well as his regular Truck ride. I think the experience and momentum from the Xfinity side will help send him to Victory Lane.

Nick: As Jim said, there's so many capable drivers yet to win that I see it as almost a given. Ben Rhodes, Noah Gragson, Matt Crafton and so on are winless and 2018 and are real threats to content for the win at Dover.

Tim: If Noah Gragson can take the confidence and momentum from his performance in the two NASCAR Xfinity Series starts he’s made during the break (finishing 2nd at Richmond and 4th at Talladega) he could very easily win this Friday. Matt Crafton is another driver I expect to contend for the win as well as he’s won at Dover in 2016. I win by either of these two drivers would keep the streak alive.

Elliott Sadler has won two of the three Dash 4 Cash races this season with the final one being held this weekend at Dover. If Sadler doesn't win it again, who do you think has the best shot (Ryan Sieg, Brandon Jones, Justin Allgaier) at scoring the final $100,000 bonus of the season?

Jim: I believe Sadler has an excellent chance to bring how a third $100,000 check this weekend, but if he fails, I think Brandon Jones is going to surprise everyone, both with his first series victory and the final $100,000 Dash4Cash bonus. Jones is fresh off his career-best second place finish last weekend at Talladega and his finished sixth, 10th and second in his last three races.

Nick: It would be huge for Sieg if his team could score the bonus and I think we'd all like to see the underdog team prevail, but they'll need some help. Dover is not an easy track though and one track-blocking incident is all it takes to wipe some big names from contention. Barring any unforeseen issues though, I think Justin Allgaier will deny his elder teammate and take the bonus at Dover.

Tim: Based on the past two weeks, I would say Sadler is a safe bet to win the final Dash4Cash bonus of the year and give him three of the four bonuses. I agree with Jim that Brandon Jones has ran well recently and could surprise everyone, but I feel a track as challenging as Dover will give the nod to the veteran who’s made a ton of laps around the ultra-fast one-mile track.

Aric Almirola: "I’m having the time of my life" at SHR

With his Talladega win, Joey Logano's "goal has changed"