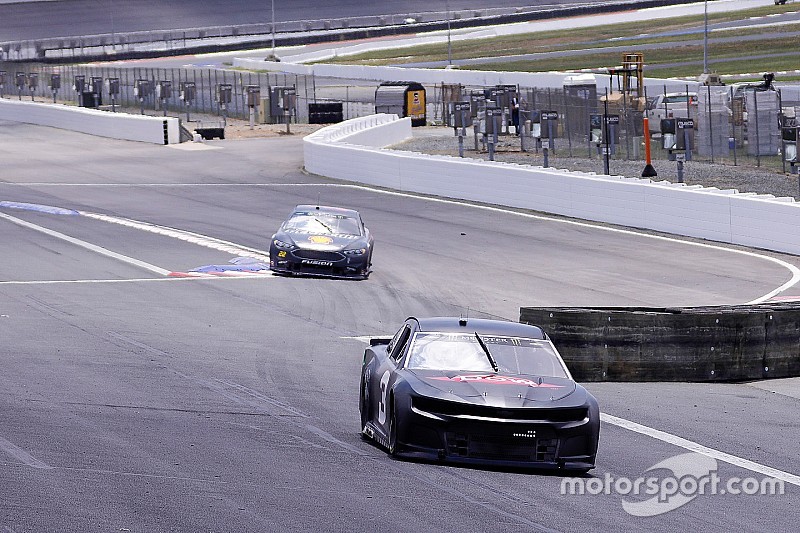 Who will advance past the first round of the playoffs as NASCAR heads to the ultimate wildcard race at the Charlotte Roval.

1. Clint Bowyer, Jimmie Johnson, Erik Jones and Denny Hamlin sit in the bottom four positions heading into the Charlotte Roval to end the first round of the NASCAR Cup Series playoffs. Do you think any of them will advance to the next round or will they face elimination?

Jim Utter: I think the playoff hopes of both Jones and Hamlin will get snuffed out at the Roval. However, I believe both Bowyer and Johnson will find a way to advance to the second round. Johnson has shown speed the past two weeks and likely wouldn't even be in danger of he could have finished to his potential at Las Vegas. Bowyer has been one of the few teams this season to have shown the speed at times to compete with the 'Big 3.' I think he has the opportunity to put together a strong race this weekend.

Kenny Bruce: I think it will be extremely tough for Jones and Hamlin to advance. Not only does something catastrophic have to happen to someone such as Alex Bowman (11th) or Ryan Blaney (12th), but Jones and/or Hamlin would need to finish well ahead of Bowyer and Johnson. And I don’t see that happening. The Roval is the great unknown, the great equalizer, so unless I’m one of the top four, I would be concerned. Bowyer and Johnson could survive but it’s going to take a mistake-free race on their end and trouble for one of those in ninth through 12th.

Nick DeGroot: The JGR teammates of Denny Hamlin and Erik Jones are in a bleak position, but Clint Bowyer and Jimmie Johnson have a real chance to break back in and with the unpredictability of the Roval, I don't doubt their ability to do so.

Tim Southers: I think unless Denny Hamlin or Erik Jones can win this weekend their playoff chances end on Sunday. Unfortunately for them I feel they’re just in too deep a hole to advance unless a handful of drivers have trouble - which could happen this weekend on the ROVAL. I think Jimmie Johnson will find a way to advance and Clint Bowyer has the speed and experience to advance past Alex Bowman.

2. How impressed where you with the run by Dale Earnhardt Jr. last week at Richmond and what are your thoughts on his plans to return for more next year?

Jim: It was a strong run by Earnhardt, one that his fans probably hoped they could have seen at the end of his Cup career last season. It wasn't a surprise in the sense that JR Motorsports cars have been good this season and Earnhardt has had a stellar record at Richmond. If Earnhardt keeps saying "one more race," however, the promotions of perhaps seeing his final NASCAR start are going to appear disingenuous.

Kenny: I was extremely impressed. I never thought he would be competitive, much less win a stage and lead the most laps. As for his potential return, that’s disappointing. Earnhardt Jr. walked away from competition citing health concerns. That danger still exists whether he runs one race or 36.

Nick: It showed he hasn't lost a step and it was good for him to get back behind the wheel, both for the fans and for him as a commentator moving forward. As for the future, I hope we continue to see him run the one-off race here and there, as it only brings more eyeballs to the sport.

Tim: I’ll be the first to admit I was very surprised at how well he ran last weekend qualifying well and leading the most laps in the race. SInce he retired due to health reasons I honestly thought he would not run as hard as he did, however, good for him and his fans.

3. Do you think a veteran has a better chance of winning at the Roval or do you feel the track is so unique, that the playing field is pretty even for all the drivers?

Jim: Since everyone will essentially be competing on a level playing field - having no previous on track experience and no data to go by - I think the winner will boil down to the driver with the best speed and team. In other words, I think a series championship contender will end up in Victory Lane.

Kenny: I think the opportunity to win is wide open. Everyone, veterans and youngsters alike, head into the race with no experience competing on the ROVAL. They all have experience, just not on this particular configuration. It will come down to who can adapt and make the least amount of mistakes.

Nick: It's a lottery. Survival and luck will be as important as road racing experience this weekend. As for who is more likely to make it to the finish, I'd put my money on veterans.

Tim: If there has ever been a race that no one can honestly pick a favorite, it has to be the Xfinity Series race on the ROVAL. None of the drivers have had a chance to get on the track yet and that will probably mean you can expect one of the championship contenders to be up front, but anything can happen and probably will in this race.

4. Kyle Busch has the most road course wins of any active driver in the NASCAR Cup Series entering this weekend's race at CMS. Does that make him the favorite to win this weekend?

Jim: I don't think Kyle Busch's road course experience is what makes him a favorite. I think the fact Busch comes in with nothing to lose, having already locked in a berth in Round 2 of the playoffs, is what makes him a bigger threat. That, along with the fact that he has had one of the top teams and race-winning speed all season long are what will make Busch a favorite to be the inaugural winner at the Roval.

Kenny: He’ll certainly be one to watch with a combined four wins at Sonoma and Watkins Glen. But Martin Truex Jr. has three road course wins, Kevin Harvick has a pair and Chase Elliott scored his first career Cup win this year at Watkins Glen. Busch is a favorite just about everywhere the series goes – the ROVAL will be no different.

Nick: I agree with Jim that the drivers who aren't worried about their playoff position make them a bigger threat than those not yet locked in. Kyle Busch, Brad Keselowski, Martin Truex Jr. and even Kevin Harvick go into this very unique race looking only to win.

Tim: I think Busch is a favorite almost every weekend so I don’t see any reason to count him out this weekend. He does have a lot of success on road courses, however no one has experience on the ROVAL. I think he’ll be up front Sunday and could win just because he doesn’t have any pressure and he could benefit from any craziness ahead of him during the race as desperate drivers will probably do almost anything to advance in the playoffs.

Jeff Burton: "I don't see anything easy" on the Charlotte Roval