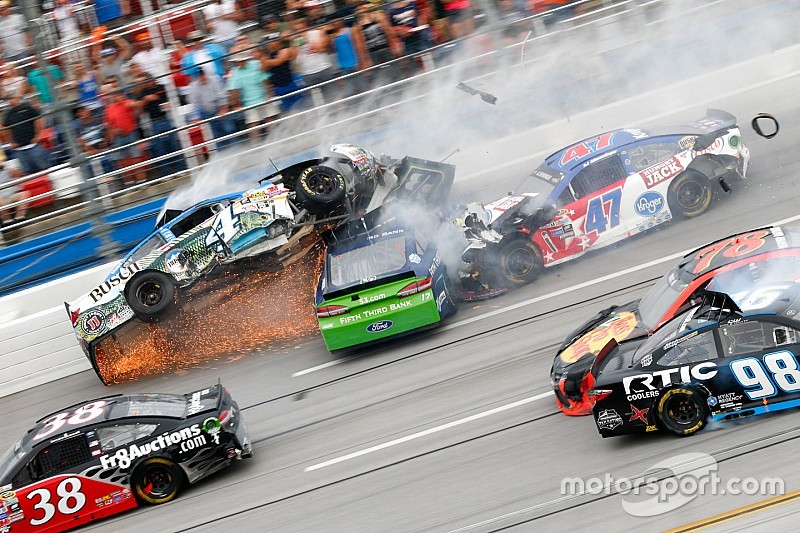 NASCAR heads to the always unpredictable Talladega Superspeedway this weekend.

Talladega Superspeedway has produced some surprise winners throughout its history. Richard Brickhouse, Lennie Pond, Dick Brooks, Bobby Hillin Jr. and Phil Parsons all scored their only Cup win at the superspeedway. Who do you think could be a long-shot winner at Talladega this weekend ?

Jim: Both of the Front Row Motorsports drivers, David Ragan and Michael McDowell, I believe could be long-shot candidates to pick up a victory this weekend. In fact, Ragan has done it before for FRM. The organization seems to have picked up some steam in recent weeks and looked particularly strong at Bristol. Superspeedway races usually level the playing field among all the contenders, so the key will be for Ragan and/or McDowell to still be around and in the mix when the race is decided in the final laps. If they are, both are capable of pulling off the upset win.

Nick: Would Kasey Kahne count as a surprise winner? Leavine Family Racing would be quite an upset in my mind and I think they're capable of getting it done. A Trevor Bayne win would be another big surprise, especially considering the recent news that Matt Kenseth will now share driving duties with him behind the wheel of the No. 6. Keep an eye on Matt DiBenedetto too. He turned some heads at Daytona before getting swept up in a late-race wreck.

Tim: I agree that the Front Row Motorsports drivers David Ragan and Michael McDowell could very well walk away Sunday with a surprise win. I also think Matt DiBenedetto could also be in the mix if things work out his way on Sunday. This is one reason why I love Talladega and we’re due for a surprise winner.

Tom: Penske and Ford has been a potent combination in the recent restrictor plate races, considering how well Ryan Blaney drove at Daytona, he could be a surprise contender to get his second Cup win.

Kyle Busch has equalled Kevin Harvick's streak of three straight wins this season. Do you think he could score a fourth straight win at Talladega?

Jim: There is no reason why Busch couldn't pick up a fourth consecutive win at Talladega but there is an even greater chance that he will fail - something he knows all too well simply because many circumstances at superspeedway races are out of a particular driver's control. Busch certainly is good at restrictor-plate race, has plenty of experience and Joe Gibbs Racing generally has strong cars at them. From that standpoint, Busch has everything he needs to accomplish the feat. Staying out of trouble and a little luck may make the difference in the end.

Nick: He certainly can, but the problem, his chances of victory are about the same as everybody else's at Talladega. It's the great equalizer where luck and timing are just as important as speed and talent. But if he survives to the finish, he'll be a real threat.

Tim: I think he should be one of the favorites for sure this weekend, but as drivers often state prior to the race, they’ll need luck on their side. Busch is more than capable of winning the pole for this race and running up front all day, however, he could just as easy get collected in the “big one” and his day over in an instant. That is Talladega.

Tom: As Busch himself said, four in a row will be tough because of the randomness of Talladega. He’s the man in form, but Ford’s restrictor advantage and the luck of the draw will probably end his streak.

Ricky Stenhouse Jr. scored his first of two Cup wins on restrictor-plate tracks last season. Do you think he could pull it off again this weekend?

Jim: There's no reason why he can't. Stenhouse clearly established himself as one of the better restrictor-plate drivers with his pair of victories last season and there's no reason to believe he won't be equally as strong in this season's first visit to Talladega. In addition, Stenhouse is coming off probably his two best races this season in terms of performance. So, a little momentum on his side won't hurt either.

Nick: For the same reasons stated with Busch, he has a shot. It's all going to come down to staying out of the wrecks. If he can be there at the end, he'll be a contender, that's for sure.

Tim: I think Stenhouse proved last year he knows how to race on restrictor-plate tracks and there’s no reason to think he can’t do it again this year. In fact, I would say Stenhouse and the Fords are the odds-on favorites to win on Sunday.

Tom: Stenhouse has certainly improved in recent races, but inconsistency continues to be a thorn in the side. I’d expect him to be in contention for the win.

Saturday's Xfinity Series race at Talladega will be the first in recent memory with no Cup drivers entered (because it's a Dash4Cash race). Do you think that will change the racing we will see at all?

Jim: Absolutely. In fact, Saturday's race could very well produce a surprise winner - and therefore surprise championship contender - much like the Road America race did last year with Jeremy Clements' victory there. With no Cup drivers and several other inexperienced drivers this weekend, it will be interesting to see who is able to stick around at the end of the race and remain in contention. As in Cup, the restrictor-plate racing will level the playing field among all the competitors and could give some teams a big opportunity that normally don't have a shot at a win. Keep an eye on JD Motorsports and drivers Ross Chastain and Garrett Smithley.

Nick: Remember Daytona? It was thrilling, but Cup drivers completely controlled the front of the field for the majority of the race. With them out of the picture, I expect more of a free for all race with lots of lead changes and potentionally, some big mistakes that lead to the inevitable 'Big One.'

Tim: Much like the NASCAR Cup Series race on Sunday, this race could also produce a surprise winner. I agree with Jim that Chastain and Smithley could be in contention for the win and I also think we could see Ryan Truex or maybe Michael Annett as  well in Victory Lane.