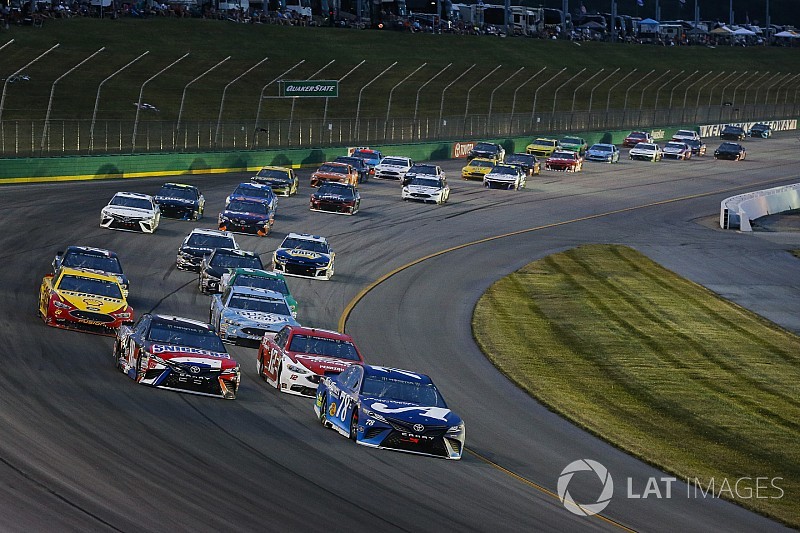 On this week's edition of the NASCAR Roundtable, we talk the upcoming playoffs including who needs a win, who can challenge the 'Big 3' and who could pick up a win at NHMS this weekend.

Martin Truex Jr. won on Saturday to keep the 'Big 3' in the news and in Victory Lane. However, do you see any drivers making improvements who could contend for a win in the near future that no one is talking about?

Jim: Honestly. Kyle Larson looks like the only other driver who appears able to contend with Truex, Harvick and Busch on a regular basis, though he still has yet to earn a win this season. As far as the unexpected, I think the Wood Brothers and Paul Menard have shown enough speed where they could contend for a win, which would immediately put them in the playoff picture.

Kenny: No one in the “not being talked about” category really stands out and I don’t see a team finishing 15th or so every week suddenly contending for a win. I think the best bets are still the established stars such as Brad Keselowski or Kurt Busch. Both have been inconsistent but they’re also up front and leading laps on occasion.

Nick: It's only a matter of time before Kyle Larson starts winning again, although he doesn't fit the 'not talking about' category, but I feel he's the best shot. If he can stack up a few wins, he's going to make it the 'Big 4.' Other than him, I see no one else that can go toe-to-toe with them in the championship.

Tim: I feel Kurt Busch will pick up a win and I also think Aric Almirola will score a win before the end of the regular season. Both have been fast at times and have the ability to get it done and clinch playoff berths.

With seven races remaining before the start of the Cup playoffs, is there anyone currently on the outside who has a legitimate chance of earning their way back into it?

Jim: I certainly think A.J. Allmendinger could pull off a win at Watkins Glen and win his way into the playoffs but he's going to have to have a car capable of contending with Harvick, Truex and Busch, all of whom have been successful on NASCAR's road courses. Paul Menard and Jamie McMurray are the most likely, in my opinion, of having a chance to string together several good finishes and move back up the playoff ladder and back into playoff contention.

Kenny: It could happen but I don’t anticipate that being the case. Unless a team on the outside suddenly gets hot and we’ve seen no signs of that. Paul Menard, 23 points behind the cutoff, isn’t so far out that he couldn’t string together a run to put himself in the playoff field. But beyond that, the points gap really widens.

Nick: I agree that Jamie McMurray and Paul Menard are probably the leading candidates, as well as A.J. Allmendinger with Watkins Glen still ahead. Beyond them, I could see Ryan Newman scooping up a win before the playoffs in the right situation. He's done it before.

Tim: I agree that Paul Menard has shown the speed to get it done this season and if he could put together a few races in succession, he could find himself in the playoff picture. A.J. Allmendinger is always a possibility to win on a road course and could score a win at Watkins Glen very easily.

Ryan Newman, Denny Hamlin, Matt Kenseth, Jimmie Johnson and Kurt Busch are part of a group tied for the most career wins at NHMS with three each. None of these drivers have yet to win this season. Do you think one of these could pick up their first win of 2018 this weekend?

Jim: Based on recent performance, I would say Kurt Busch has the best chance of the group to earn another victory at New Hampshire, which would also lock himself into the playoffs. Hamlin and Newman have shown flashes of speed and certainly could factor into the outcome on Sunday. Busch, however, has shown the most consistent speed.

Kenny: The logical choice would be Denny Hamlin, who won at NHMS last season. But the No. 11 team hasn’t really been contending for wins of late. Kurt Busch, in my opinion, rates the best chance.

Nick: Yes to all of those names with the exception of Kenseth. Roush just isn't there yet and he won't be a threat for the win. Newman is great on flat tracks, Johnson just needs to be able to have the car under him and Kurt Busch should be able to capitalize on the strength of SHR this weekend. But yes, Denny Hamlin would be my pick. He has three wins there and only Brad Keselowski has a higher average finish (excluding Daniel Suarez who has only raced there twice).

Tim: While Newman has shown some speed in several races I just don’t think he’s been consistent enough recently to battle for a win and Hamlin won there last season so I am picking him to win this time around. I know he hasn’t shown consistent speed this season, but if there is one place I could see him winning, it’s at New Hampshire Motor Speedway.

Joey Logano returns to his home track at NHMS. Could he become the fifth driver with multiple wins this season after Sunday?

Jim: Logano was very strong at Richmond and Martinsville this season, the tracks somewhat similar to New Hampshire. Team Penske seems to have made some progress on speed in recent weeks and together with Logano's experience on the track, I would say he has a chance, but he'll have to show a lot more to out-duel Truex, Harvick and Kyle Busch.

Kenny: Logano put together a nice streak of sorts earlier this season with eight consecutive top-10 finishes, including his win at Talladega. But the No. 22 team has cooled a bit and needs to pick up the pace to contend for another checkered flag.

Nick: I'm going to say no. Personally, I think it's going to be Truex and Harvick for the win but when it comes to other drivers that could come out on top, Logano isn't near the front of my list.

Tim: I don’t think so. He has been consistent near the top-10 or in the top 10 but hasn’t really been challenging for a win recently so I would have to say it would be a longshot to win this weekend.

Stewart: Fans should pressure NASCAR for Cup race on dirt