Matt Puccia will be the crew chief of the No. 16 3M Sprint Cup team at Roush Fenway Racing effective immediately. Puccia has been with Roush Fenway Racing since the end of 2004 and was most recently assigned to the research and development program. Prior to this season, Puccia was crew chief of the No. 98 Paul Menard entry throughout the 2010 Nationwide Series season, leading the team to 19 top-10 finishes and fifth place in the point standings. 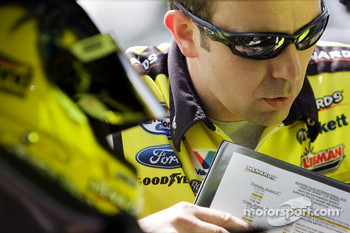 Puccia’s first role as crew chief at Roush Fenway came in 2006 with the No. 50 Camping World Truck Series team. He led the No. 99 Truck Series entry with driver Erik Darnell to a victory at Michigan in 2008 and finished fourth in the final point standings. In 2009 Puccia made the move to the Nationwide Series as crew chief for a partial schedule with Menard before the team raced full time in 2010.

“Matt Puccia has been a very effective and successful crew chief with the organization in both the Nationwide and Camping World Truck Series,” said team owner Jack Roush. “Most recently he has led the research and development efforts for our superspeedway program which helped put David Ragan in victory lane in Daytona. This is a natural progression of our crew chief development and I have every confidence that he will do well in this new role. Greg Erwin has made a significant contribution to our engineering efforts and our program is better because of him.”

“I am excited for the opportunity to work with Matt Puccia,” added driver Greg Biffle. “Greg Erwin led this team to the Chase the past three years and I look forward to Matt doing the same.”

Erwin’s role in the organization will be announced at a later date.