Roush Fenway Racing, the world’s largest motorsports organization, announced that it has re-signed driver Carl Edwards to a multi-year agreement starting in 2012.

we’re thrilled that our relationship will continue...

“Carl Edwards has achieved a level of success on and off track that would put him at the top of the list for any race team,” said Roush Fenway co-owner Jack Roush. “Carl and the No. 99 team are having a terrific season again this year, and we’re thrilled that our relationship will continue for many more.”

“We saw great potential in Carl a decade ago, and it’s been a thrill to watch him grow into one of the sports’ premier drivers behind the wheel of the No. 99,” added Roush. “We didn’t take our past success for granted when we sat down with Carl to talk about his future. As an organization, we approach each week with an intense focus on being successful in the race to come. Carl’s position atop the points is a testament to that diligence.”

“I sincerely appreciate the amazing opportunity that Jack Roush has given me in this sport and am honored to race for him,” said Edwards. “As an organization, Roush Fenway provides the resources I need to win, and as a driver, that’s the most important thing. We’re having a fun season on the race track as we’re leading the points and in great position for the Chase. That’s the result of a lot of hard work from the men and women at Roush Fenway, Ford Motor Company and Roush Yates Engines. I really enjoy competing with this group and looking forward to continuing that relationship into the future.”

Edwards, who will make his 250th Sprint Cup start this weekend, currently sits atop the Sprint Cup point standings, and is a virtual lock to secure his sixth Chase for the Sprint Cup “playoff” berth in seven seasons. He has visited NASCAR victory lane seven times and earned six poles during the 2011 season.

“Carl brings a tremendous amount to the table from both a marketing and competitive standpoint,” said Roush Fenway president Steve Newmark. “He has one of the largest fan bases in the sport, is able accomplish so much for his sponsors and is second to none on the race track. We’re proud to have Carl as part of our roster going forward, a roster that includes some of the most experienced veteran champions on the circuit, and some of the sport’s most promising up-and-coming drivers.” 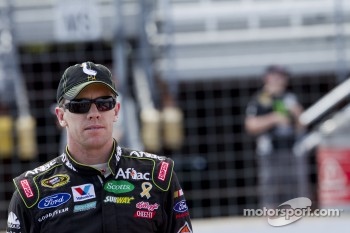 Edwards joined Roush Fenway in 2003, driving the No. 99 Ford F-150 in the NASCAR Camping World Truck Series. After a stellar inaugural season that saw him capture three wins, 13 top-five finishes and the Rookie-of-the-Year award, he got the nod from Jack Roush to move up to the Sprint Cup Series in the No. 99 Roush Fenway Racing Ford.

Over the next eight seasons Edwards teamed with Roush Fenway to win 59 races across NASCAR’s top three divisions, capturing the 2007 Nationwide championship and making the Sprint Cup “Chase” for the Cup in five of his first six seasons; including a runner-up finish in 2008. Edwards and the No. 99 team have led the point standings for the majority of this season.

“We are pleased with Carl’s vote of confidence in Roush Fenway and Ford,” said Jamie Allison, director, Ford Racing. “This signals he believes he is with the right team and the right automaker to win races and championships. Now we can continue to focus on winning the 2011 championship.”