Blaney on final restart: 'I would have wrecked us both' 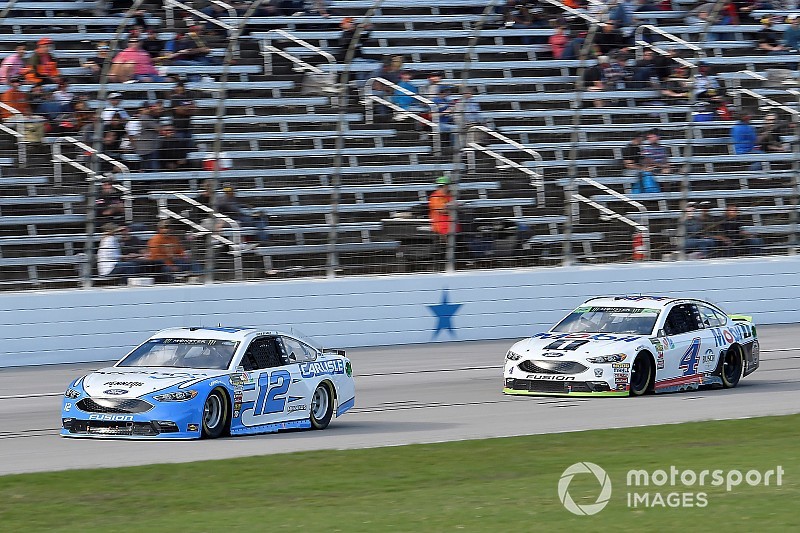 After leading late in Sunday’s AAA 500, Ryan Blaney came up just short of a win at Texas.

Blaney was able to pass eventual race winner Kevin Harvick on the next-to-last restart of Sunday’s race at Texas Motor Speedway, Blaney was not able to get past him in the two-lap overtime.

“Yeah, I figured he wouldn't make that move (restart at the bottom) three times,” said Blaney. “We almost cleared him the first restart up top. Then I did the second one. I figured he'd take the top.”

After Harvick chose the top lane on the final restart, Blaney knew how would only have one chance to take the lead.

“The 42 (Kyle Larson) gave me a heck of a push, but I didn't quite get far enough ahead of (Harvick) into Turn 1,” said Blaney. “If we would have went in there, he was kind of on my right rear, I would have been okay. But we went in side‑by‑side.

“If I sailed off in there as fast as he did, I would have got loose, wrecked us both.”

Blaney knew he would have to get out front on the final restart to have any chance to score his second win of the season.

“We got by (Harvick) on that one restart but I just couldn’t hold him off,” said Blaney. “He was really good. I kind of missed (Turns) 1 and 2 by an inch and he took advantage of it. We needed to be mistake-free and then some and I just couldn’t be that.

“Then we had another shot at it. The last one, he took the top, like I knew he was going to and he motored around me. I thought we were a second place car all night really. I thought (Harvick) was head and shoulders above everyone else but I thought we were second-best for sure.”

Blaney and the entire Team Penske group were racing with heavy hearts after the loss of team fabricator Dewayne Felkel, who died unexpectedly earlier this week.

“I really wanted to win one for Dewayne and his family,” added Blaney. “We are thinking about him. I wanted to win for him. Maybe we will get one for that family here in the next couple (weeks).”

Martin Truex Jr.: "I'm telling you, God is testing us"