TALLADEGA, Ala. (Oct. 18, 2011) -- With 50 percent of the Chase races completed, U.S. Army driver Ryan Newman is looking for better success in the second half of NASCAR's playoff-style championship format.

After three-straight Sprint Cup finishes between 18 and 25, Newman's No. 39 team righted the ship Saturday night with a 10th-place result at Charlotte Motor Speedway.

If you're one of the fortunate teams that can avoid trouble while running up front in the closing laps, then you have a pretty good shot at winning.

"We need to have some special runs in the next five races," said Newman, who is currently 10th in driver points. "We definitely have the potential to do well at each of the next five tracks. We just need to avoid the bad breaks that plagued us during the first five Chase races."

But avoiding bad breaks in his U.S. Army Chevrolet during Sunday's Good Sam Club 500 at Talladega Superspeedway is always a major challenge at the 2.66-mile oval.

"No matter which way you dissect the numbers, we haven't produced the results in the past couple of years at the restrictor-plate races in Daytona and Talladega," noted Newman," who did win the 50th running of the Daytona 500 in 2008. "However, our recent sub-par finishes at the restrictor-plate races were not from a lack of performance, but mostly from being in the wrong place at the wrong time."

Newman is indeed correct about being in the wrong place at the wrong time. In both of the Daytona races this season, he was leading in each event with a few laps remaining, but fell to finishes of 23rd and 25th respectively due to factors beyond his control.

"We all know what usually happens in the closing laps of a restrictor-plate race," stated Newman, who was also in contention in the April Talladega race. "If you're one of the fortunate teams that can avoid trouble while running up front in the closing laps, then you have a pretty good shot at winning. I really feel we're due to once again drive the Soldiers' car to Victory Lane."

Newman and the rest of the Sprint Cup field will have to contend with two new rule changes this weekend that could make tandem drafting more difficult. The rule changes include a slight increase in the size to the restrictor plate openings and a decrease setting in the radiator's pressure relief valve.

"We'll have to wait and see what effect the new rule changes will have on restrictor-plate racing," said Newman. "We all have our theories but won't know for sure until we actually get on the track this weekend. Personally, I think there will be less tandem drafting than in the past because of the rule changes. But weather will also dictate how long we can push each other before swapping. Cooler temperatures the better." 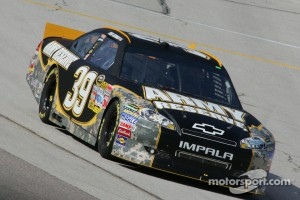 Whichever way the 43 cars will race on Sunday at NASCAR's longest track, Newman would like to snap his four-race Talladega jinx that includes finishes of 36th, 35th, 23rd and 25th.

"It would sure be nice to have a smooth race at Talladega and bring home a solid finish," said Newman. "We have the potential, just need to avoid trouble."