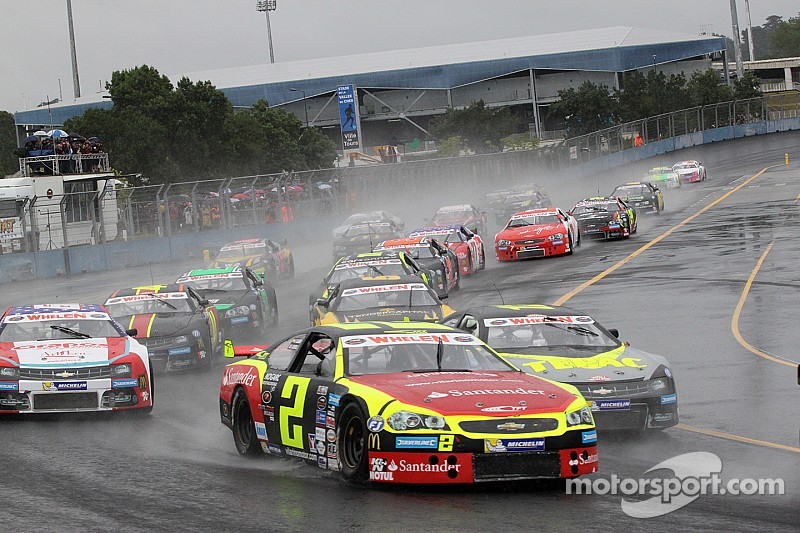 NASCAR's popularity in Europe has been on the rise.

Considering NASCAR has its roots with the Moonshine runners from the Prohibition years, the sport has come an incredibly long way in a relatively short space of time.

What isn’t particuarly well known in its home land of the USA, is just how big the sport is becoming in Europe, and especially Great Britain.

At the start of the 1990′s, mention NASCAR to somebody in Europe, they wouldn’t know much about it. The exception to the rule would be the Daytona 500, Richard Petty, and, thanks to a cameo in “The Dukes Of Hazzard,” Cale Yarbrough. That would be about it. In Britain, we knew more about Indycar, thanks to the likes of Jim Clark, Mario Andretti and Graham Hill. Television wise, we had no NASCAR, just an hour of Indy 500 highlights, and that was that! Formula One was, and still is, king of motorsports. It always will be. However, with the dawn of satelite TV, things were about to change.

NASCAR hit the UK television screens in 2004 with the Daytona 500. Throughout the next few years two races were shown live. Daytona and The Brickyard 400. In those days, there wasn’t a great deal of interest and live coverage was dropped in 1999 for hour long highlights. One positive though was the building of two Ovals in Britain at Rockingham, and Lausitzring in Germany. A minor series called ASCAR raced on the ovals, but the main reason for their existance was to host Champ Cars. Indeed Lausitz is famous for Alex Zanardi’s horrifying crash. Sadly, the ovals get little use these days, although the British Pick Up Truck championship do use Rockingham.

It wasn’t until the new NASCAR TV deal in 2007, plus the addition of Juan Pablo Montoya to the series that the sport began to grow more internationally. Not to mention Australian racing star Marcos Ambrose showing up around the same time. Montoya’s involvement brought NASCAR to the minds of Formula One fans. His biggest fan base outside of his own country is Europe. The new TV deal enabled Cup and Nationwide Series races to both be shown live here.

More and more people began to notice the sport, and it was only a matter of time until social media was used to increase interest.  These days, the NASCAR Fans UK accounts on Facebook and Twitter have a huge following. They bring NASCAR news to British fans on a par with Formula One. There are similar accounts across Europe, and I'd say that NASCAR is probably one of the fastest growing sports on the continent.

As in the USA, drivers have a loyal fan base, and it's be no surprise that Dale Earnhardt Jr has the biggest following over here. Other popular drivers include Jeff Gordon, Jimmie Johnson, and Tony Stewart.

I spoke to Kevin Gravenell, who runs the social media accounts but has also helped increase coverage in the UK.

Gravenell: ” I have done a lot of promotional work with Premier Sports who hold the contract. They were new to the sport and I advised them on the coverage and helped with their Electronic Programme Guide. They are increasing coverage. All three series are shown in the UK on various channels”

Perhaps the main result of the interest, is the NASCAR Whelen Euro Series. An official NASCAR championship and it is getting bigger every year. The US Speedfest at Brands Hatch gets the biggest crowd at the circuit in the entire year. The European stock car equivalent of the Daytona 500, every driver wants to win there. It has even enticed Max Papis to own a team in the series.

The defending champion is Ander Vilariño and as part of his reward, he is racing the K&N Pro East race at Watkins Glen in August. That series is the final step for most stock car racers before stepping up to the three national divisions of NASCAR.

I chatted with Ander about the growth of the series.

Vilariño: “Since the series became NASCAR sanctioned, the interest has grown very quickly. We have increased tv coverage and that means extra sponsorship”

So how about racing in the USA?

Vilariño:  “It would need a great deal of sponsorship to be possible.  I myself are very settled in the series, but with the right amount of sponsorship, who knows what can happen? I’m keen to keep winning the championship, and racing in the USA whenever possible. Every year the quality of drivers and teams is increasing and the crowds are increasing. It can only be good for the sport in Europe”

NASCAR Europe themselves told me they are very happy with the growth, and the future looks bright.

So there you have it. From humble beginnings, NASCAR is now one of, if not the fastest growing motorsport in Europe. Long may it continue.