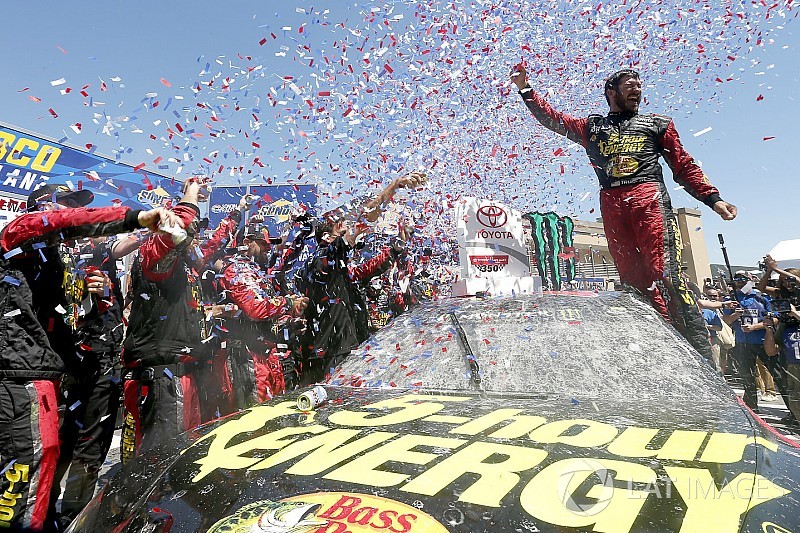 Martin Truex Jr. earned his 18th career win and third victory of the season, outsmarting the competition in a game of strategy at Sonoma Raceway on Sunday.

Truex led 62 of 110 laps en route to the victory, his second at Sonoma Raceway.

"That's all Cole (Pearn). That's all him," exclaimed Truex in Victory Lane.

"I was just begging, hoping the caution wouldn't come out."

The race went back green for the final stage just before halfway on Lap 55/110. After short-pitting just shy of the end of the stage, Kevin Harvick and Truex once again cycled into the race lead for the restart.

As the drivers settled in for the final 55 laps, it was Harvick ahead of Truex, Clint Bowyer, Kurt Busch and Kyle Busch.

Back in the pack, Ryan Blaney struggled to keep up as he battled power steering issues. Ty Dillon encountered issues of his own, stuck in third gear and falling off the lead lap.

Green-flag pit stops began with 40 laps to go, but it was two laps later that Harvick pitted from the race lead. However, Truex did not follow him into the pit lane. Radio communication revealed that No. 78 crew chief Cole Pearn intended to bait the race leading No. 4 into pitting, making them think Truex was coming in the same lap. He repeatedly said “pit now” before telling him to stay out at the last second. After the fake-out, Truex continued on for nine laps before making his final stop with 29 laps to go.

Truex emerged seven seconds adrift of Harvick, but it didn’t take him long to cut the gap to pieces.

With 22 laps to go, he passed Bowyer with ease, and then got Harvick under braking into the hairpin just two laps later.

With Truex in the catbird seat, SHR decided to swing the odds back in their favor and threw the dice, calling both Harvick and Bowyer to pit road with 18 laps to go. The hope was that a caution would occur, putting them back in control of the race.

But even without a yellow, they had the pace to regain their lost positions with Harvick retaking second-place from Chase Elliott with nine laps to go. Bowyer followed suit and moved into third soon after.

But it was cruise control for Truex at the front, crossing the finish line with a 10.5 second advantage.

"Oh man we all make mistakes," said Harvick after the race. "We all do things split second that might be right after it all happens."

Kevin Harvick loses out on strategy at Sonoma