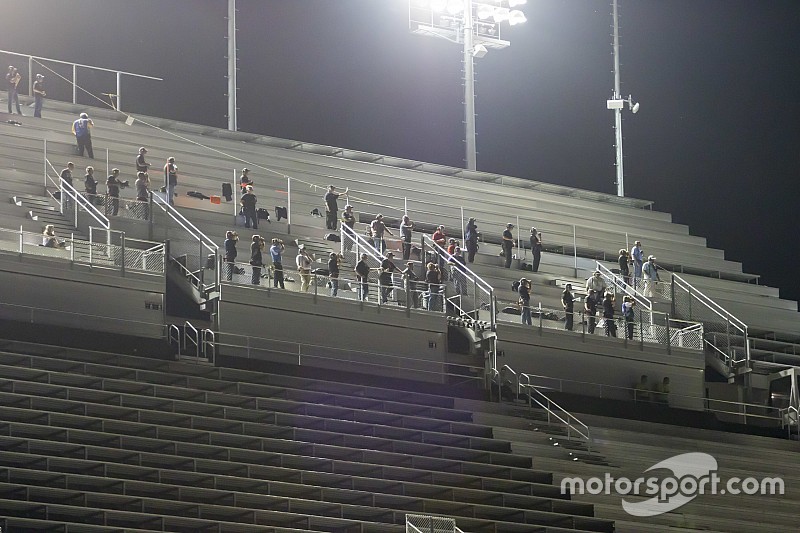 The stark transformation of Daytona International Speedway on the outside of the 2.5-mile track is also clear from the infield.

And while the progress of the Daytona Rising project was not expected to impede competition, there was a wrinkle that arose this week. The makeshift spotter’s stand, west of the current race control cube where the original grandstand once stood, has changed the traditional view.

For Tab Boyd, who guided Joey Logano to his Daytona 500 win in February, his previous roof vista is no more.

It does change everything.

“The spotter location is different,” Boyd said. “A lot of us were pretty worried about it — worried about being a little lower, a little closer to Turn 1. It does change everything. They did do a real good job of having us a pretty nice place to be. It’s nice and stable. Just about as nice as any place we go and it’s a temporary thing.”

With the spotters between 60 and 80 feet lower than their normal perch, many eyes in the sky have their view blocked to the left where the drivers come out of Turn 4 and as the cars move into Turn one where the catchfence impedes the view of the track.

You have to remember we’ve been doing this for 10 to 12 years and these are different angles so naturally, it messes us up.

“The vantage point is different,” says Eddie D'hondt, spotter for Jeff Gordon. “We don’t see the cars as well coming to us off of (Turn) 4 when and we’re challenged to see the cars going into Turn 1 — seeing the depth of the cars because the darkness of the fence. We can only see a silhouette of the car because they’re so much lower after they pass the start finish line running against the wall where the fans sit.

“You have to remember we’ve been doing this for 10 to 12 years and these are different angles so naturally, it messes us up.”

Boyd made Logano aware of some of the areas on the track which could be problematic throughout the race — particularly in traffic. Logano was one of five Cup drivers that were able to have a dress rehearsal of sorts for the Coke Zero 400 in Saturday’s XFINITY Series race.

“He told me in practice, ‘hey, from here to here, I can’t see you very well,” Logano said. “So I kind of know. I know he can’t see off of (Turn) 4 very well from where he’s standing right now — which he never really can because they’re coming at you. And when they’re going away it’s hard to because the fence is right there and you have to look through the fence. It’s a little too low so it kind of blurs out your angle into (Turn) one. But it always is but I think it’s a little more harder than normal.”

With the limited amount of practice on Friday, the spotters had difficulty honing in on a decent place to remove some of the blind spots. But by the end of the NXS race, Boyd says the spotters were gravitating to the top of the steel structure.

“The angle off of Turn 4 is a little different,” Boyd added. “It just takes getting used to. We’re a little lower so the angle of the cars and the way they make their moves have changed.”

A horse of a different color

Another challenge for spotters at the July Daytona race is the variety of different liveries that are introduced for the holiday. Jumble a bunch of unfamiliar cars together and it can be a recipe for disaster.

“When people change up their paint schemes — and the Fourth of July brings on a lot of new paint schemes — we have to think about it a little longer,” Boyd added. “Like the 88 car looks totally different. That car is black, there are others that are dark blue and cars that are red, white and blue. You just lose who is who in the mix.

“You have a pretty good idea of the cars that are three and four cars lengths behind you but after that, if people are making moves especially when you’re mid-pack, it’s hard to distinguish who’s who when they’re coming directly at you because their hood schemes changes. I’m glad our car is the same but we have to keep an eye on everybody else.”

Luck runs out for the Wood Brothers at Daytona

The Big One strikes early at Daytona - video