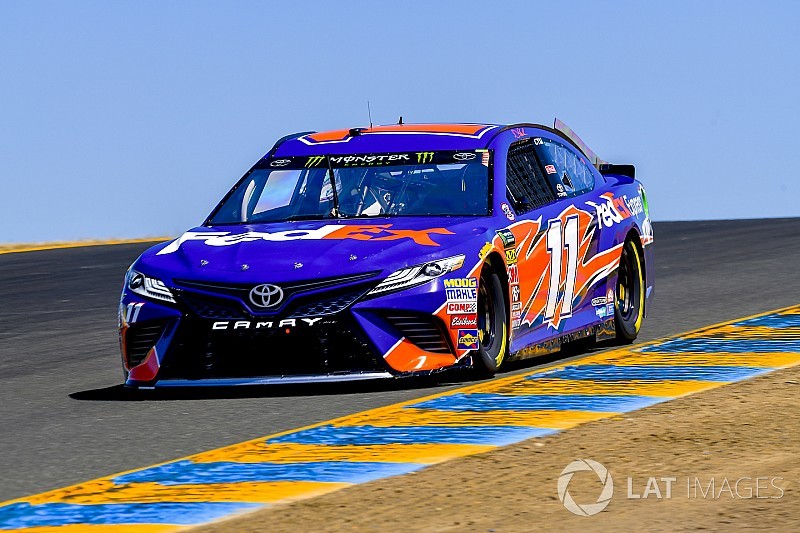 Martin Truex Jr. and Kevin Harvick cycled back into the race lead as A.J. Allmendinger led another group of cars down pit road in the break between stages.

However, the stop did not go well for Stage 1 winner Allmendinger, who was fifth off pit road. It was Brad Keselowski, Chase Elliott, Jimmie Johnson and Kyle Larson.

The race resumed on Lap 30/110, but just a few laps later, the caution flag was needed once more when Allmendinger found more trouble.

The No. 47 missed a shift, blowing the engine. He came to a stop at the exit of Turn 1, emerging from the car dejected and heartbroken. “I haven’t missed a shift on a road course in ten years … I let everybody down,” he later told FS1.

Jamie McMurray also encountered problems, forced behind the wall with no oil pressure.

The remainder of the stage went caution-free, but not without incident. Brad Keselowski ended up dropping all four wheels off the track at Turn 9, sliding sideways in the process. Darrell Wallace Jr. also went for a spin in the hairpin and Daniel Suarez needed all the track to pull his car out of a four-wheel slide in Turn 7.

As was the case in Stage 1, Harvick, Truex and Clint Bowyer gave up a potential stage win in favor of better track position for the final stage.

Allmendinger wins Stage 1 at Sonoma after Truex and Harvick pit