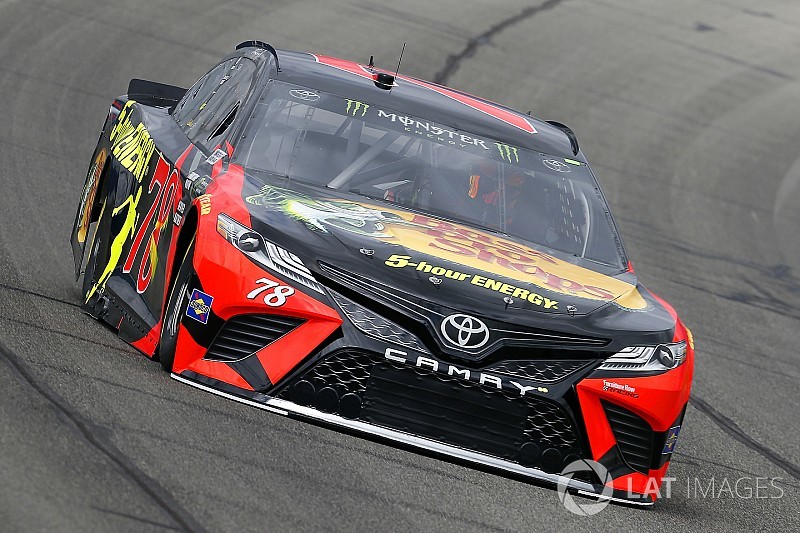 Martin Truex Jr. made a clean sweep of the stage victories in Sunday’s Auto Club 400.

Truex, who had yet to win a stage entering Sunday’s race, completed a sweep with a dominating Stage 2 victory over Brad Keselowski.

Logano was the first off pit road following stops during the break between Stages 1 and 2 and when Stage 2 went green on Lap 67, he held the lead.

Truex was able to run down Logano and retake the lead on Lap 72.

With 40 laps to go in Stage 2, Truex had already built up an almost 3-second lead over Logano. They were followed by Kyle Busch, Larson and Keselowski.

Larson hit pit road on Lap 88 as the first to make a green-flag stop in Stage 2 and once again the move triggered a slew of others to do the same, hoping to cut the 60-lap segment in half.

When the cycle of stops were completed on Lap 95, Truex had reclaimed the lead followed by Larson, Logano, Kyle Busch and Hamlin. Busch was the last car to make a stop, providing him slightly fresher tires when he returned to the lineup.

With 16 laps to go in Stage 2, Kyle Busch had used that advantage to power up to the runner-up position, more than 7 seconds behind Truex.

On Lap 110, Trevor Bayne hit the wall between Turns 3 and 4 to bring out the caution. Paul Menard also appeared to have suffered some damage on the track.

“Wow that hurt, I hit at about 200 (mph). We’re more than done. That’s the hardest hit I’ve ever had in my life,” Bayne said over his team radio.

All of the lead-lap cars elected to pit again for tires, with Truex being the first off pit road and holding the top spot on the restart on Lap 114.