NASCAR: State of the Sport 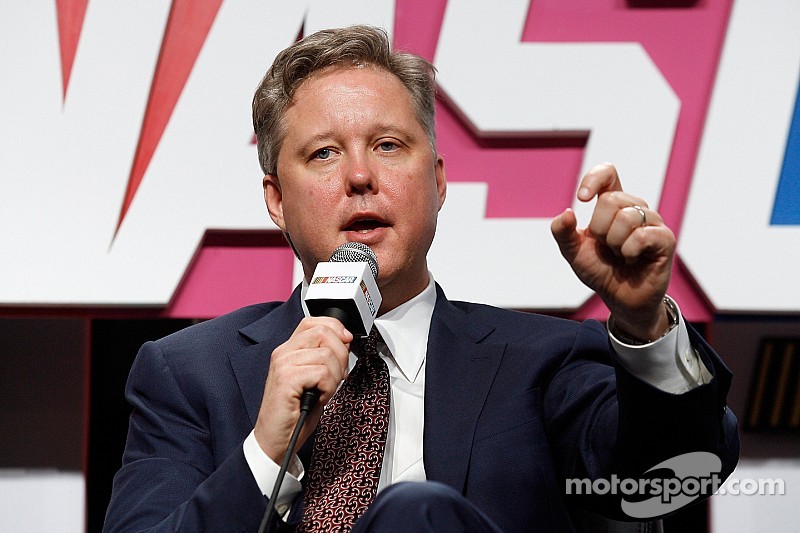 NASCAR Chairman and CEO provides insight to the latest topics.

Not surprisingly, France was pleased with the way the new playoff system unfolded over the course of the season. France believed the Chase “accomplished all our goals, probably exceeded them, in the balance between winning and consistency."

However, under the new format which France referred to as “relatively simple” he was pleased that new strategies had developed from it.

“Phoenix was a great example of that, where one person in (Kevin) Harvick won the race, but another in Ryan Newman got there in more of a consistent model but got there nonetheless,” France said. “How that all plays out, that's going to take some time just to unfold for all of us.

“But the net of it is we're interested in raising the interest level by raising the competition level.  When we do that, obviously it's up to us and our partners how to present that, but that's what our fans and ourselves love most.”

Although Sunday’s outcome will have a direct effect on the overall perception on the season, France believes 2014 “has a chance to be one of the most successful seasons in NASCAR history.”

Depending on who eventually wins the title and what transpires in the Ford EcoBoost 400 could alter next year’s template. As of now, France anticipates any change would be “modest to zero”.

“We reserve the right if there's a modest thing that we might make an adjustment on, but like I said, it's exceeded what I had hoped for, and it's done precisely what we thought we wanted to do, which was recalibrate competition, or winning rather, and still have a strong place for consistency and all the rest, but recalibrate that balance,” France said.

Still, a lot of attention has been directed at Newman and the Richard Childress Racing No. 31 team’s winless season and whether a champion without a victory is beneficial for the sport. France replied that NASCAR doesn’t “want a system that ignores consistency”. Come Sunday, France believes the contenders will elevate their games and “the best team will win”.

There ought to be room for teams that do it every week and can be consistent.

“It's all about the balance,” France said. “I think that wanting to win events has taken on an undeniable importance.  At the same time, there ought to be room for teams that do it every week and can be consistent.  And by the way, if you get through those three rounds, and I don't care how you do it frankly, but if you get through into the finale on Sunday and then you beat those three teams, the other three teams, that will be an achievement for anybody, and I don't care how they sort of go in and out of the championship weekend.

“We'll be delighted if Ryan Newman and Richard Childress are able to pull it off.  I think he's the underdog at this point, but they kind of like that, so we'll see how it plays.”

France acknowledged that the 2015 schedule was created with the competitors in mind. With the “different communication plan” the teams are included in the ground floor of the decision-making process.

France likes the changes to the schedule – particularly in the first half – and believes teams will plan accordingly with an eye on the final 10 races. France reiterated that the new Chase format was not “a one‑time phenomenon” but a program that entailed a lot of thought and provided a platform that NASCAR could build on for the future.

Although there’s been debate where the testing ban is concerned, France said it’s unlikely to change due to their ability to reduce the cost structure for the teams.

“We listened to the teams in our various team owner meetings through the last couple years, and I think we have enough in place to enforce the testing policy for 2015,” France said. “We'll see how it goes.

Aggression from the competitors under the current Chase format is a byproduct that France expected. He added officials in the NASCAR tower will be monitoring the race closely on Sunday in case one of the Chase contenders – or a teammate get out of control. If so, the actions will be addressed.

There is a line, and hard, tight racing is what we expect.

“There is a line, and hard, tight racing is what we expect and what I'm sure we'll see, and if it gets over the line, that's what we do,” France said. “You go to the tape of any of the past events, the big events, Petty‑Pearson mixing it up as they were coming to the start‑finish line, or Bristol with ‑‑ any of them.  They're all filled with tight, hard racing, sometimes drivers thinking that one or the other went too far.

“That's NASCAR.  That's what we do.  That's the whole point of what we try to get up every morning and create, knowing there are limits to anything, and we will deal with it should we have to.”

France was taken aback by Matt Kenseth’s actions against Brad Keselowski particularly given the 2003 champion’s reputation for being “a pretty mild-mannered guy”. He was adamant that he doesn’t want the sport to become so sanitized that drivers are afraid to “express themselves”.

But on Sunday, France doesn’t want to see a situation occur as was the case at Texas, where NASCAR is forced to step in.

“We realize that emotions sometimes will get you there, and we reacted very harshly if you look at the scope of those penalties, and we should have,” France said. “Anybody in our situation is always worried about escalation.

“We don't have dugouts or locker rooms per se.  We often have drivers park pre‑race and everything else very close to one another, and that's part of the fabric of NASCAR, that after a race or before, drivers will ‑‑ it's not unusual for them to express themselves and have a heated conversation between them.  We're not going to change that. But now crew members and others who join in, that's a different discussion, and like I said, we dealt with that.”

Although Brad Keselowski continues to be criticized by his peers, France is pleased to see the 2011 champ embody the 100 percent rule. He feels Keselowski is doing “agreat job of being aggressive”.

I think he's doing exactly what he should be doing.

“I think he's doing exactly what he should be doing,” France said. “I've told him that.  Everybody has got a right to have their own style of driving out there.  If you go back to any of the great ones, Cale Yarborough, Darrell Waltrip, Rusty Wallace, all of them, they faced a similar discussion from time to time as they started to have success on the track, as some of those drivers believed a little bit more contact was necessary sometimes, and they were young and they were getting some words about that.

“But if you go through NASCAR's history, that's what we're about.  I say it all the time:  Late in a race, we expect ‑‑ there are limits and lines, but we expect tight, tight racing that sometimes will have some contact.  It's in our DNA.”

France continues to explore the international market – particularly Canada and Mexico. It’s not loss on the NASCAR’s topper that both markets are critical to the sport’s growth.

“Canada is roughly, percentage wise, the size of what follows us here in the U.S.,” France said. “We're going to always be looking to see how we can take events, not just on television but to and from at various places, because that's a fan base that we know is there, and south of the border, different discussion, that's obviously where we've also had a lot of success, and we also have an important Hispanic fan base that we're trying to elevate, get excited about NASCAR. Our moves in and out of markets in North America will not change.  It's still very important to us.”

France took a measured stance on the issue of domestic abuse and admitted that “the rightful heightened awareness” was not lost on NASCAR. He added that the sanctioning body’s policies moving forward “would reflect the significance and importance that it should”.

In the case of the allegations against Kurt Busch, France said that he had not spoken to the 2004 Cup champ directly, but NASCAR is monitoring the situation.

“It's under review by law enforcement and others, and they have not made a decision on that regarding Kurt,” France said. “So until they make some judgments on that investigation, it wouldn't be right of us to just intervene before they've even gotten the investigation completed.  So that's our position.  We'll respect their process.  It's in their hands.”