Stewart looks for a win at Michigan 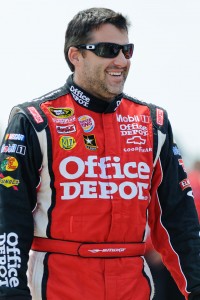 KANNAPOLIS, N.C., – Tony Stewart has won at least one race in each of his 12 previous years in the NASCAR Sprint Cup Series, the longest such streak among active drivers. And the pilot of the No. 14 Mobil 1/Office Depot Chevrolet Impala for Stewart-Haas Racing has been a part of the Chase for the Championship six times since its inception in 2004.

Winless thus far in 2011, and a precarious 10th in the championship point standings with only a 25-point margin over 11th-place Clint Bowyer, Stewart’s desire to extend his win streak to 13 straight seasons and make the Chase for a seventh time is as pure as it was when he entered the Sprint Cup Series as a rookie in 1999.

That the next opportunity for Stewart to win and bolster his point standing is just as pure, and it comes at the aptly named Pure Michigan 400 at Michigan International Speedway in Brooklyn.

Stewart has acquitted himself well at the 2-mile oval nestled in Michigan’s Irish Hills. He won the June 2000 Sprint Cup race where he started 28th, and in doing so, set a record for the farthest back any Sprint Cup driver has come to win at Michigan until Mark Martin came from 32nd to win the June 2009 Sprint Cup race.

However, Stewart still holds the record for greatest improvement from a starting position at Michigan. The two-time Sprint Cup champion started 41st in the 2007 Citizens Bank 400 and advanced 38 positions to finish third, besting the previous mark of 36 places earned by Jimmy Spencer (40th to fourth) in the 1996 June race.

“I made sure I crossed the start/finish line at the green dead last,” said Stewart about lagging behind at the start of the race. “I made sure (A.J.) Allmendinger got by me so I could say I went from dead last to wherever we finished. From 43rd to third, that’s a pretty good day. I’m not going to complain about that at all.”

Throw in his victory in round three of IROC XXV at Michigan in 2001 – his first IROC win – and Stewart’s body of work at the D-shaped oval is impressive. By locking down another Michigan win and the 40th total victory of his Sprint Cup career in the Pure Michigan 400, Stewart’s purity as a perennial Sprint Cup winner would remain intact, as would his championship chances.

When you’re this deep into the season without a win, what goes through your mind, especially when you’re used to winning?

“This is my 31st year in racing. You take one weekend at a time and you don’t think about the numbers as to how long it’s been since the last time you’ve won. You just go with the same attitude you do every weekend, and that’s to try and win the race. You go through the steps of trying to put yourself in that position to be there at the end of the day. You focus on what you need to do to win the race you’re in.”

Is the fact you haven’t won yet a testament to the competitiveness of the Sprint Cup Series?

“You can’t predict who is going to be good each week. This sport is more competitive than it’s ever been. It’s a cool time to be a driver in this series, for sure.”

You’re 10th in points, but with a 25-point cushion over 11th-place Clint Bowyer. Do you feel you have to win a race or races to ensure you make the Chase via the wild card?

“I don’t want to have to rely on the wild card. I just want to keep getting points, and if we can stay in the top-10, then we don’t have to worry about that wild-card spot. We’re just going to try and be consistent and keep doing what we’re doing, and I think our consistency here lately has been much, much better, even if the results haven’t always showed it. If we can keep doing what we’re doing, I think we’ll be alright.”

Much is made of Michigan being in the backyard of the Big Three auto manufacturers. Is it a big deal?

“It’s a big deal for us to do well for the manufacturer’s sake. All the representatives are there. It’s their backyard. It’s their proving ground. It’s a big, big track where handling is a big deal and horsepower is a big deal. It’s definitely a place for them to showcase what they do in our series.”

Many races this year have been dictated by fuel mileage, and Michigan is a track where races are often decided by fuel mileage. Why have fuel-mileage races become so common this year and why are they particularly common at Michigan?

“I think it’s kind of been the normal deal. There are always tracks where fuel mileage is an issue and part of the strategy. You know those places are still a part of it, like Michigan, and there have been a couple of other tracks where it’s been a factor at the end of races. But a lot of that has been affected by the race itself. If you have an accident and the caution comes down at the wrong time, it can put that race in a fuel mileage strategy kind of mode. There are places you know are guaranteed to be fuel mileage races and then there are places where it’ll happen but it’s not predictable.”

Because Michigan is often dictated by fuel mileage, do you prepare for it any differently than you do other tracks?

“I don’t think we do. I mean, you treat it like any other race. It’s one of a lot of stops on the schedule. You try and do the best job you can at being as prepared as you can. You know that horsepower is going to be at a premium, but at the same time, you’re going to have to make your car handle. It’s a track that has a lot of miles on it, and it makes it fun because of that.”

Is it frustrating to drive in a fuel-mileage race?

Where does Michigan rank in terms of all the 1.5- to 2-mile, D-shaped ovals that are on the Sprint Cup circuit?

“It’s so wide and there are so many lines that you can run – that’s what makes Michigan fun for drivers. The drivers can really help themselves out if they don’t have a car that’s working right. You can literally race from the white line on the apron all the way to the wall. That’s the groove. You can move around on the racetrack and find a spot that helps your car do what you need it to do. You have to figure out how to gauge your momentum and know where you want to be on that racetrack when you enter those corners. Depending on how your car is driving, you can move around on the racetrack and help yourself. Michigan’s layout gives the drivers the flexibility to really make a difference in their car’s handling, and that’s what makes Michigan such a fun racetrack.”

How do you dial your racecar into Michigan’s track conditions? Is it a bunch of minor tweaks or are major changes made?

“Well, it’s a balancing act. You can’t get too crazy and get out there too far because you can’t give up the points, but at the same time, if what you’re doing’s not working, then you’ve got to start looking. If what you think is your base and what you’ve got to stay with, if that’s not working, you’ve got to do something different, but you can’t afford to get so crazy that you take a chance on absolutely having a disaster day. At the end of the day, that can be the difference of whether you’re inside that Chase and racing for a championship or sitting there those last 10 races going ‘How did we not get in it?’”