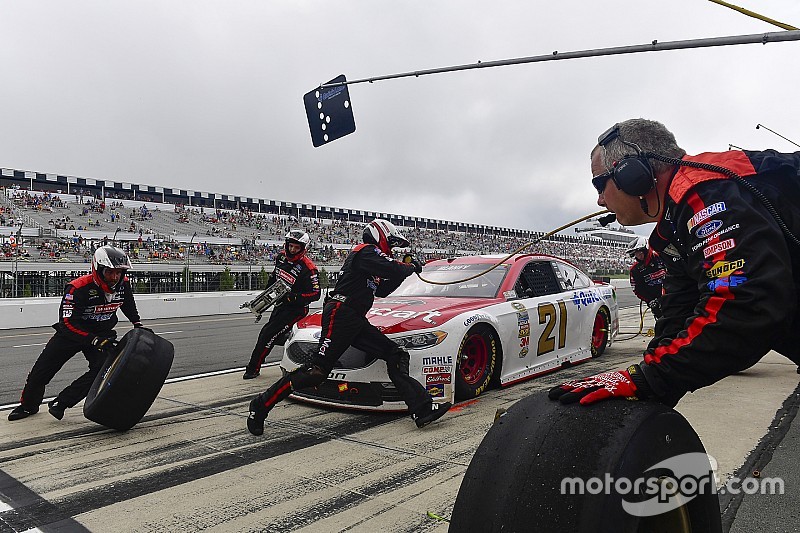 Before the 2017 NASCAR season even gets underway, Ryan Flores has an opportunity to win a series championship.

Flores spends most of the year working with Team Penske’s test team and on weekends serves as the front tire changer on the Wood Brothers’ No. 21 Ford in the Monster Energy NASCAR Cup Series.

But last three NASCAR “off-seasons” for Flores have featured his turn behind the wheel, competing in the VP Indoor Auto Racing Championship. Flores competes in TQ Midgets, which feature a specialty-built tubular racing frame with a 750cc Motorcycle engine.

This has been Flores’ most successful driving season to date, as he won both feature races at the Allentown (Pa.) Indoor Race last month and leads the TQ Midget standings with a pair of races remaining Jan. 27-28 at Boardwalk Hall in Atlantic City, N.J.

“I’m from up there in New Jersey and this is my third season running the indoor season and this is the first time I’ve won in these cars,” Flores told Motorsport.com. “I’ve finished second five times – it was good to finally get one (at Allentown) and then I won the next night, too.

“Growing up, I started racing quarter-midgets when I was five years old and I came from a racing family. My dad ran street stocks and they ran all up in the Northeast. I just always seemed to be around the race track.”

Flores, 29, came down to the Charlotte, N.C.- area in 2007 to pursue any type of racing career. He ended up with a job at Roush Fenway Racing working as a fabricator on the team that existed then for driver Jamie McMurray.

It was at Roush that he began some work on the development pit crew. He moved to Stewart-Haas Racing in 2011 and it was there he began working as a full-time pit crew member, spending time with the teams of Tony Stewart, Danica Patrick and Ryan Newman.

At the start of the 2014 season, Flores moved to Team Penske, where during the season he works on the test team, specifically on the K-Rig and pull down rigs and does some fabricating work in the offseason.

While at Penske, he’s served on the pit crew for its Xfinity Series team and most recently for the Wood Brothers, which has a technical alliance with Team Penske.

While his career as a driver may not be his main focus, Flores still enjoys finding an outlet for his passion.

“I’ve just raced forever – it’s all I know. I raced Legends cars when I first came down here to North Carolina,” he said. “But mainly I enjoy it because it gives me an opportunity to see my family, most of whom are still up in New Jersey.

“I do two, three or four race weekends a year and the quality of competition is really good. You got guys like Ted Christopher and Erick Rudolph that you get to go toe-to-toe with.

“I’ve good guys working with me and I’ve got good equipment. So now, I feel like I need to do my part and win races.”

Much works remains as Team Penske prepares for yet another NASCAR season, but Flores has some unfinished business of his own behind the wheel later this month in Atlantic City.

“That’s a really big race. I grew up on the Jersey shore, right on the water and it’s a very prestigious race,” he said. “After that, I’ll go straight back into changing tires. You can’t risk getting hurt during the season.

“Everybody here at Penske has been very supportive. There are a bunch of true racers. They think it’s pretty cool that I get to go racing.”