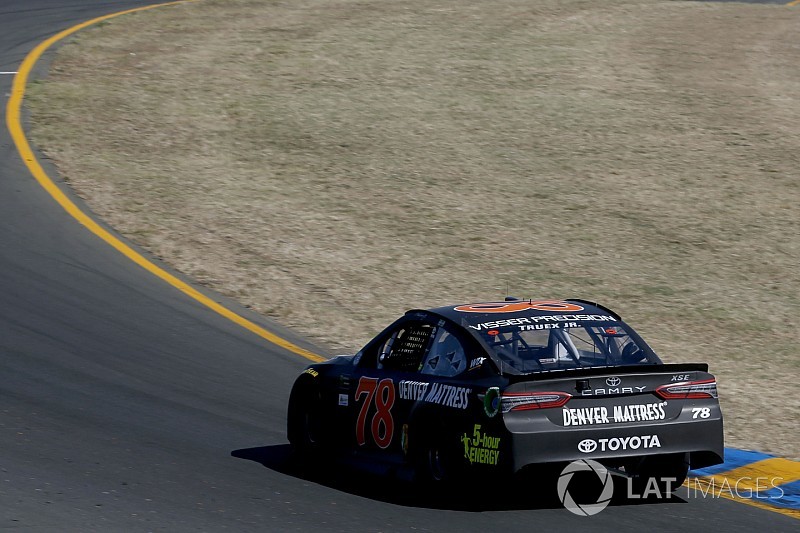 What are the keys to success at Sonoma?

After the debate over whether stage racing will dramatically alter strategy on Sunday, tires have been the hot topic over the weekend.

For drivers lacking track position, teams will need a solid game plan. But the front-runners will have to distinguish themselves with solid tire management around the 1.99-mile track, particularly since tire allotment has decreased from six to five sets.

“In the last few years we’ve seen tires play such a big role in winning this race that I think it’s been since about 2013 since this was won on two‑stop, or maybe actually 2012,” said Martin Truex Jr., who rolls off third on Sunday.

“So it’s been a long since anyone done it on a one or two‑stop strategy, and tires are going to be a big deal. So I think everybody stopped a least four times last year, and we’ll see what this year brings.”

How fast were Truex’s tires falling off during practice? “Very fast,” replied the driver.

“Five or six laps is pretty close to at least a second, so it’s a bunch,” Truex said. “You get out there on 20 laps, it’s going to be two or three-seconds.

“Definitely going to fall off a lot, but you’ve just got to lay out that, what is track position worth compared to lap times. It seems different every week, but it’s going to be important to have tires, I think.”

Goodyear runs the same tire on all four corners of the cars — the D-4678 that debuted here last year. The teams mount the tires in a directional manner which allows the tread splice to be closed for braking and accelerating.

“For Sonoma, we will employ directional mounting, where the left-front and right-rear tires are mounted the same, and the right-front and left-rear are mounted the same,” said Greg Stucker, Goodyear’s director of racing. “This directional mounting helps to protect the beveled splice of the tread component, insuring the splice is closed under the force of braking on both front tires, and closed under the force of acceleration on both rears.”

The Darlington of road courses

Jamie McMurray’s Ganassi Racing team made an adjustment between qualifying sessions on the No. 1 Cessna Chevy to compensate for his scuffed tires. The alteration allowed McMurray to move from fourth in Round 1 to second for Sunday.

After his run, McMurray described Sonoma as the Darlington Raceway of road courses due to its abrasive nature.

“There is more tire fall off here than really, lap time wise, probably about the same as Darlington,” McMurray said. “There is, gosh, two and a half seconds maybe over the course of a run-in tire fall off. It’s super hard to explain to you guys or to fans, Turn 7 and Turn 11 when you get 20 laps on your tires you give the car 15 or 20 percent throttle and it spins the tires. You literally can’t give it any gas it will not go. The car doesn’t stop very well, it doesn’t turn, but it certainly doesn’t accelerate very well. And that is why tires make such a difference here.  There is maybe, I bet three-quarters of a second off Turn 7 that you give up from qualifying trim to the end of a race turn just in that one little short section. It’s a huge difference.”

After advancing to the final round, Dale Earnhardt Jr. debated whether to add another lap to the tires he’ll start the race with on Sunday. Earnhardt inevitably aborted his second attempt in the final round and starts 10th.

“You just can’t have that many on the race track, but still decent.The car has got good speed. There are a couple of guys I think that were a little faster than us, but we certainly have a top 10 car for sure. I’m looking forward to seeing how it does in the race.”