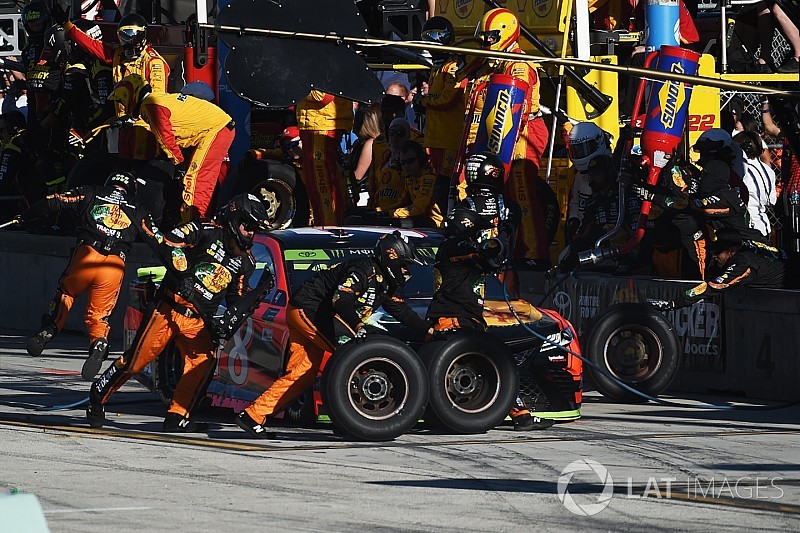 Beginning next season, NASCAR will limit the number of personnel teams in all three of its national series can bring to track each weekend.

In the Monster Energy NASCAR Cup Series, that limit will typically be 20 or 21 members (depending on whether it’s a 1-2 or 3-4 car operation).

The Cup series breakdown will be three (or four for a 3-4 car operation) organizational members, 12 road crew members and five pit crew members.

In the Xfinity Series the total limit will be 13 and 12 in the Camping World Truck Series.

“The ultimate goal here is to continue to put the best racing on the track. To continue toward that parity with more teams being able to win,” said Steve O’Donnell, NASCAR’s executive vice president and chief racing development officer.

“We looked at other areas to continue to drive parity in the sport and continue to give as many teams as possible the opportunity to win. These initiatives – moving from six crew members to five over the wall and allowing the fueler to only fuel the vehicle – fits in from a safety standpoint as well.”

O’Donnell said cost-cutting was not the driving force of the change, but obviously limits in the number of personnel at the track will reduce teams’ race weekend travel costs, or even their employee count in general.

Rosters across all three national series will be comprised of three categories: Organizational, Road Crew and Pit Crew. Teams may decide how to distribute the positions for their respective rosters.

In addition, each roster member must be assigned a number and letter based on their position, which must be visible at all times on both the team uniform and on armbands. All rosters will be made public prior to each race weekend.

Organizational jobs include competition director, team manager, technical director, IT specialists, among others. Road crew members can include crew chief, car chief, engineers, mechanics, shock specialist, tire specialist, aero specialist, spotter, engine tuner and the like. While the pit crew will be comprised of only over-the-wall pit crew members.

However, any team member who plans to work on more than one car during the course of a weekend – even in the case of accident or repair – will have to be listed on each team’s roster and will be counted toward each’s roster limit.

There will be some exceptions to the limits.

In addition, in 2018, as O’Donnell stated, the fueler can only perform the task of fueling the vehicle (and nothing else).

“We’ve got new technology at the track to monitor who is in important areas to work on the car,” O’Donnell said. “One of things we always hear drivers talk about is, ‘This is a team sport.’ We want those people to be known. We have some of the brightest minds in racing here.

“We believe by doing this roster initiative, we’ll be able to identify through their uniforms and on roster sheets to the media and ultimately to the fans who makes up each team and start to promote them as well.”

NASCAR Mailbag: Send in your questions now to the team