Todd Gordon: “We could go 15 laps I think better than anybody” 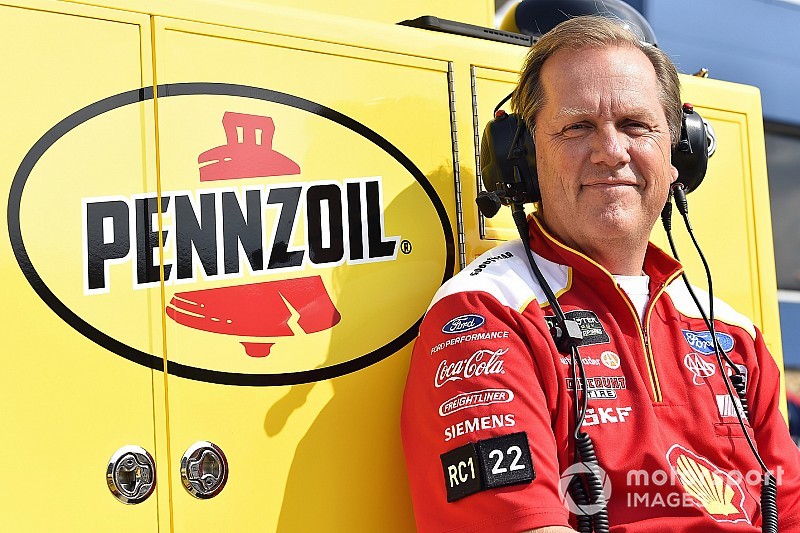 Veteran crew chief Todd Gordon felt short-run speed was the key for the championship race and he was right on the money Sunday at Homestead-Miami Speedway.

After suffering through a challenging 2017 season that saw his team finish outside the Top 10 in the series standings, Gordon and his No. 22 Team Penske Ford team were determined to get back into championship contending form.

The end result was Logano racing to the win in Sunday’s Ford 400 in a 15-lap shootout to the finish that gave Gordon and Logano their first Monster Energy NASCAR Cup Series championship.

Their turnaround 2018 season actually started in this race one year ago.

“If you go back to last year here, we had a solid day here, ran in the top-five most all day, and I think it was the first step of what we needed to focus on to make '18 be a successful year,” said Gordon.

“We took that, and we did, we came off with speed to start the year, and that win at Talladega put us in an opportunity where we were pretty much guaranteed through with the way the wins had stacked up for a couple drivers, you knew that a win was going to get you there.”

While much of the focus throughout the season was the success of the ‘Big 3’ (Kyle Busch, Kevin Harvick and Martin Truex Jr.) winning 17 of the 26 regular season races, Gordon said his team used their win at Talladega in the spring to focus on their cars for the postseason.

“We took the summer to really look at different avenues of how we make our cars handle, and given the struggles that we had in '17, we needed to find a different path,” said Gordon. “So we took the summer actually after the win to try to understand what works for our race cars.

“That path, I think, at least you wander on the wrong path there, but race by race we worked on what we could, and when it came time to be playoff time, we kind of focused back on what have we learned and what do we need to do to be successful through the playoffs.”

The plan worked for the team as they were able to pick up a pair of wins and a pole in the playoffs highlighted by Sunday’s win. Logano also scored more points than any other driver in the 10-race playoffs.

“I think if you look at it, about the first of August, we got back on this path and said we've got to tune ourselves up for where the playoffs are,” said Gordon. “We got back and we took the time to learn what we could, and then we turned it around and said, how do we make this charge into playoffs now because we didn't have the playoff points that some of the Big 3 did.”

Another memory that could have provided the team motivation was how close they came to winning the championship in 2016. While Gordon was asked if that was painful, he gave a different answer than many might have expected in Sunday’s post-race press conference.

“I don't feel like (the 2016 or 2014 finishes) were painful, they're learning opportunities,” said Gordon. “You know, this is the format we have. It's a winner-take-all, one opportunity. It's a Super Bowl. It's not how you do it every day, and you're going to be racing. We're racing hard. Sometimes it's going to work your way, and sometimes it's not.

“Yeah, '16 I thought we had a shot, but Carl (Edwards) was really strong, too. We were going to have to race Carl pretty hard, and that's why we ended up tangled together, because the two of us both knew we were going to have to race each other pretty hard for that last start, and that was part of what Carl said to us when he hopped up on the box.”

Gordon said he felt Logano and his team won their first title against the best Championship 4 field in the history of the format.

“I think when you look at it ‑‑ I mean, I'm probably biased here, but I would say it was the best Championship 4 that we've put together,” Gordon said. “If you look at it, it was the ‘Big 3 three and me’, right? So, we were the fourth wheel of the group and able to race all night long.

“That's just surreal to think about he got to race Kevin Harvick, Martin Truex Jr. and Kyle Busch for a championship and execute. Phenomenal group of guys, and again, we proved you've got to win, and Joey elevated himself to do it.”

Roger Penske on Joey Logano: "I think we've got an A+ guy"

Silverstone no longer for sale - BRDC