Tommy Baldwin Racing (TBR) recently hired seven key crewmembers for both the No. 35 and 36 teams. With the addition of the second-team, owner Tommy Baldwin hired crew chief Philippe Lopez for the No. 36 Chevrolet. The new hires allowed for shifting to create two solid teams. All teams will work their first races together in the Coke Zero 400 at Daytona International Speedway this weekend. 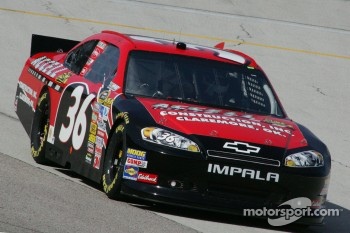 “We have recently hired seven more people and put them in the areas they need to be to make our program better,” explained Baldwin. “Philippe is a well-respected crew chief, and someone I can trust to do a good job for TBR. I'm excited that now this allows me to dedicate more time toward the future of TBR from both the competition and business sides.”

“I’m excited to be with TBR,” explained Lopez. “I have always worked with underdogs. I really enjoy the challenge. I look forward to helping the team grow to where I see it can. I have a lot of respect for Tommy. We both started programs two years ago. He started TBR, and I started with Nemco. He has weathered the storm and turned a start-and-park program into a full-time team. He’s really the only one to do that.”

“Tommy and I work really well together because we are such opposites,” he continued. “Together, we made good co-crew chiefs. I would settle him down, and he would rile me up. We evened each other out. I look forward to continuing that relationship.”

Lopez will reunite with Dave Blaney for a third time. The pair previously worked together in 2005 at Richard Childress Racing and 2001 at Bill Davis Racing. The twosome made 26 starts and collected two top-10 finishes.

“I’m really happy to be back with Philippe,” explained Blaney. “We worked together a couple of times, and we have a really good relationship.”

“It’s cool to be back with Dave. We had a lot of success right off the bat. We had three top-15 finishes in our first four starts together at Bill Davis. We just clicked. We worked together again later at RCR and almost won at Dover.”

In addition to the personnel changes, TBR is also making changes on the competition side by taking the first steps to developing their own chassis.

“I am really excited about the state of TBR right now,” explained Baldwin. “We are quickly moving forward with our progress on the competition side. We have completed our first phase of wind tunnel testing with Richard Childress Racing (RCR) and now have the direction we need to further along our program in that department. We have also just purchased an RCR car that we will be racing next week in Kentucky. While all this has been going on, we have completed the drawings for our first TBR-designed chassis. We will start building it next week with the goal of debuting in the September New Hampshire race.”