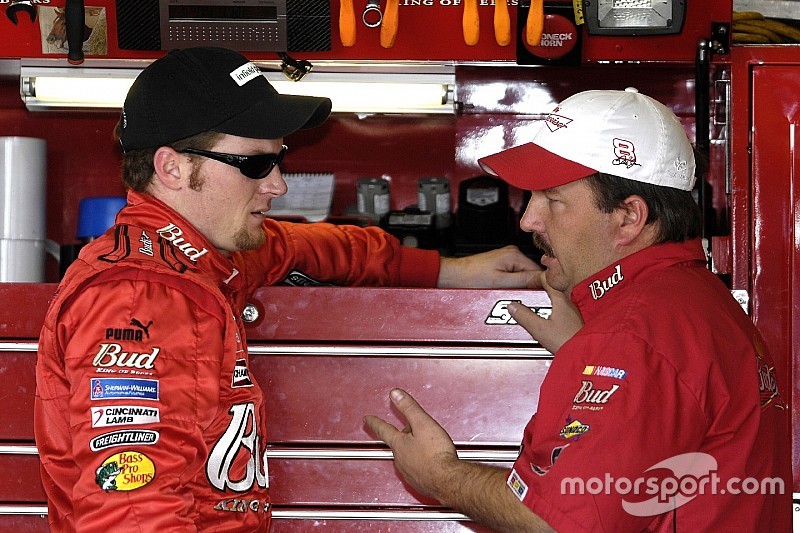 On Sunday, when Dale Earnhardt Jr. raced the No. 88 Hendrick Motorsports Chevrolet for the 340th and final time, Tony Eury Jr. raised a cold Budweiser in his honor.

In the beginning, it was just the Juniors—Earnhardt and Eury—third-generation racers looking to make their mark in the NASCAR world.

The cousins grew up watching their fathers race. When Dale Earnhardt Inc. opened, Tony Eury Sr., was one of the first employees to walk through the door. “Pops” served as Dale Jr.’s  crew chief when the heir apparent embarked on his own career. Eury Jr., affectionately known as “Stiffy,” was his car chief.

“We laugh about it in the shop—me and Pops—because a lot of these people in the sport now weren’t around back then and don’t realize how different it really was,” Eury said. “Pops was about the only (adult). Everyone else at the time was under 24-years-old. The things that we accomplished, the races that we won, it was just heart and drive.

“There wasn’t a lot of engineering. It was just go to the track and test your butt off and figure it out. If you got beat, the next week you worked harder, so you could beat those guys back.”

Along with the crew’s youthful exuberance—kept in check by Eury Sr.—Junior shared his father’s sense of invisibility. After the Eurys led Earnhardt to two Busch Series (now Xfinity), titles they advanced to Cup full-time in 2000.

Seventeen of Earnhardt’s 26 Cup wins came in the first seven years of his career at DEI. The team won marquee events and battled against the biggest names in the business.

“Some of the races, you’ll never be able to take that away. Winning the (2000) All-Star race. Winning Texas. Winning the 500. We were close so many times and finally did that. Winning so many Shoot-Out races and winning so many races at Talladega, it was just incredible. We won the big ones like Bristol, like Atlanta.

“I was very fortunate to be a part of that. And man, just the friendships you’re made along the way. You look back and see what we’ve all been through, and I would take those four guys over and over and over because that was a strong group.”

At the core of that team were H.A. “Doc” Mergen, Tom Ryan, Kevin “Two Beers” Pennell and Brian Cram. Dan Stillman, Troy Prince, Andy Stapp, Tony Barclay, Barry Hoover and Jeff Clark were the supporting cast. They enabled Earnhardt to feel like King Kong back in the Driver 8 days.

While they worked hard, they played even harder.

“We were all racers and then you had Pops’ leadership to keep us all straight,” Eury recounted. “We had people in every area that could bring something to the table. We would sit down as a group and say, ‘OK, what do we need to do to make  our car go faster?’ Everyone would put their little piece in and we would work to that goal. We had some stuff figured out that was working really good. We knew what Dale Jr. liked.

“When we first came into the Cup series, we struggled because our cars were so good in the Busch Series that really, he just didn’t have to hit anything. It was like, ‘You just drive.’ So when we got into the Cup deal, we were very fortunate that we were good at the tracks were we won in Busch, but when we got to Pocono and Indy and places like that, places that we’d never been, we kind of struggled because we were trying to get the feedback that he needed and what we needed. Everybody knows that there was plenty of partying going on, but when we got to the race track, it was down to business.

“Dale Jr. has certainly matured today from where he was at but back in those days, he was just having a good time, partying it up and driving the wheels off of anything we would give him and just go for it.”

After Earnhardt won six races but lost the Cup championship in 2004, DEI changed crew chiefs on the No. 8 team—a decision the driver regrets to this day. Midway through the season, Eury Jr. took the reins. The following year, the team finished fifth in the standings but never regained the consistency they enjoyed under Pop’s direction.

In 2008, when Earnhardt elected to leave DEI, those halcyon days were replaced by the buttoned-up environment at Hendrick Motorsports. Although Eury Jr., accompanied Earnhardt as his crew chief that first year, they never regained the magic. Twelve races into the 2010 season, Eury Jr. was replaced by Lance McGrew. Eury finished the season with the No. 25 team and another young driver named Brad Keselowski before joining Pops at JR Motorsports.

It was at JRM where Eury first encountered Danica Patrick. He worked as Patrick’s crew chief as she transitioned from the open wheel ranks to stock cars. His experience with Patrick fueled Eury’s desire to develop young talent and became a catalyst for his latest project—Fury Racing. In addition to building chassis for Northeastern modifieds, super late models and road course cars, he’s worked with William Byron and Harrison Burton.

“I hated to see what came out on (Friday) with Danica, but that one of the things kind pinpointed me to what I wanted to do,” Eury said. “It was very rewarding to help her because she knew so little about stock car racing and being able to teach her what was going to happen and how she needed to approach things—like being honest with the media because I had seen it all with Dale Jr.

“It makes you feel like you’re giving back after taking from the sport for the last 25 years. It just got to me, the schedule. You were making great money but it was 290 days you were sleeping in a motel. It was one of those deals where I was ready to take a chill pill, step back. But I love building fast race cars and I love helping people. Danica’s deal really turned me to this. That made it even more sad to see her deal, because I know she loves racing and I know in no form does she want to get out.”

Eury believes Earnhardt’s 14 Most Popular Driver Awards and the fan base he’s cultivated will comprise a large portion of his legacy, along with the acumen he showed on restrictor plate tracks.

“He was a great speedway racer,’ Eury said. “His dad obviously taught him a lot about the draft, but I think he was as good as his dad. We had a lot of fun—internally—myself, Pops, Junior and Dale Sr., when he was still alive during the Busch years. When we went to Japan, that first year we raced together, jabbing back and forth like, ‘Who was the best?’

“We had a good time at what we were doing. I miss him as much as anything. But we still get to do what we love—and that’s work on race cars and have family and friends around us.”

And when the NASCAR caravan rolls down to Daytona next February, Eury knows Earnhardt won’t regret the weekly grind. What he’ll miss are the friendships he’s developed across the sport over the last three decades.

“The biggest deal is you don’t realize how many friends you have in the garage area,” Eury said. “It’s officials, it’s the media, it’s the guys on the other teams, that’s what you miss. That’s the biggest thing from the outside looking in, and looking at Dale Jr. maturing over the last five years it’s been pretty cool. When he had that concussion and had that time off, he was kind of like the rest of us. He figured out there was more to life than just racing. There’s a whole other chapter of your life that’s out there.

“Dale Jr. has always wanted a family—and now he has that coming. He’s going to keep busy. I’m sure if the concussions wouldn’t have kept on coming, that he would have kept racing. But there’s no reason for him to go out and hurting himself and jeopardize what he has coming for the next part of his life. He’s done what he needed to do. We’ve said it from Day 1—he’s not his daddy. He never will be.

“But he had a great career, and he’s done the things he wanted to do and he’s made a bunch of friends, too. We’ve all cherished the memories, been a big part of it. It’ s sad to see it coming to an end, and I wish he could do it for another 20 years. But I’m glad to see he’s healthy, able to have a family—and Amy (wife) has been a big part of his life. It’s going to be interesting to see how it goes.”

NASCAR Mailbag: Send in your questions now to the team