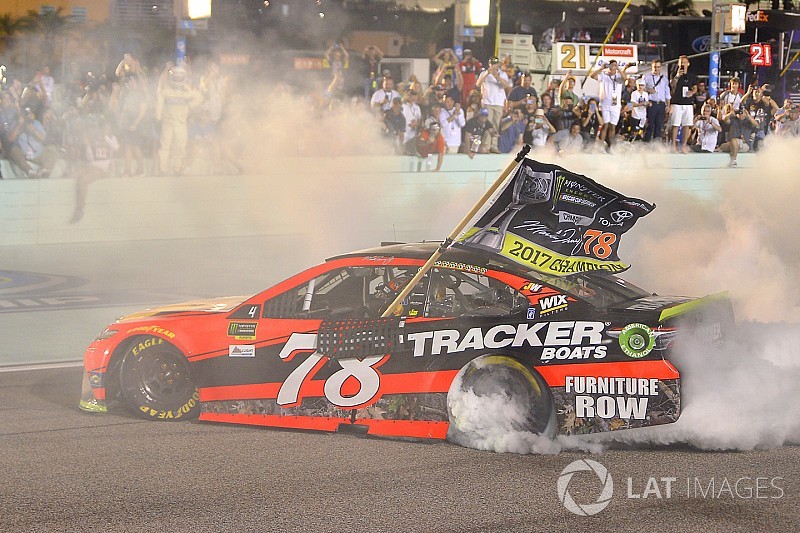 The Motorsport.com NASCAR team takes a look at the ten best drivers from the 2017 Monster Energy NASCAR Cup Series season. 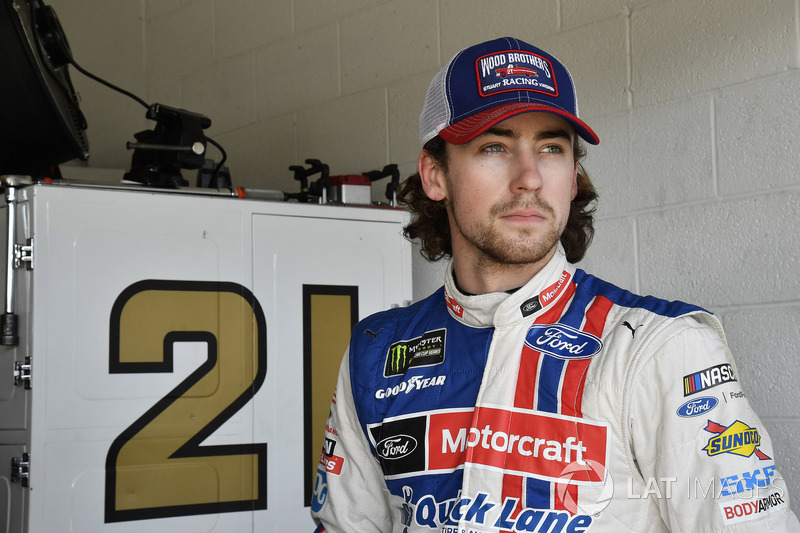 Jim Utter: The accomplishments of Blaney and the Wood Brothers cannot be overstated this season. Blaney got his first Cup win and put the Woods in position to win their first Cup series drivers championship. Blaney may be moving to Team Penske but his contribution won't soon be forgotten.

Nick DeGroot: Through their relationship with Team Penske, the Wood Brothers were able to perform at an impressive level during 2017. Blaney drove like a veteran and collected his first win at Pocono, passing one former champion (Kyle Busch) and holding off another (Kevin Harvick) to get the job done.

Tim Southers: Scored his first Cup win at Pocono and showed he can get it done in the top level of NASCAR. Moving over to Team Penske next year should help him continue his development. 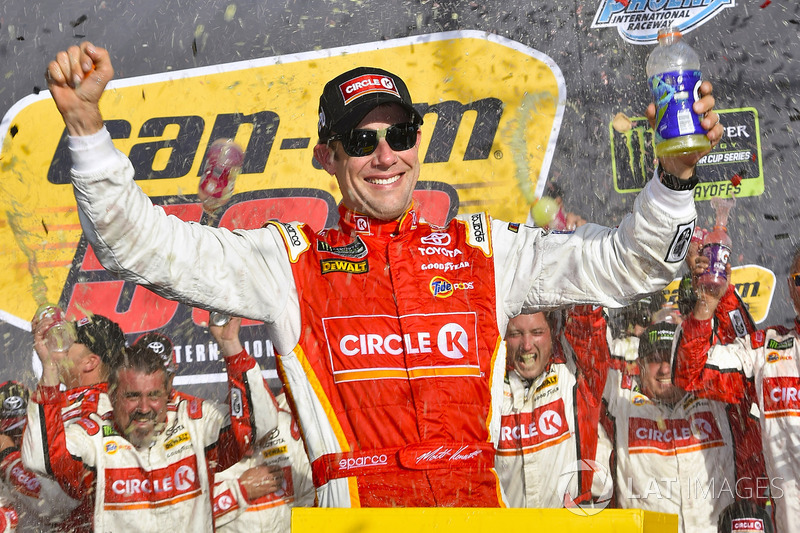 Jim: What turned out to be his final full-time season in the Cup series ended on a good note with a victory at Phoenix.

Lee Spencer: Kenseth went out on a high note with his victory at Phoenix Raceway—his 39th-career Cup win . Certainly, he would never mail it in, but his inability to secure a seat for 2018 proved to be a distraction in what will likely be the final full-time season for the 2003 Cup champion.

Nick: Kenseth's final season ended on a high note as he reminded the world he could still get it done, winning his 39th career Cup race in the penultimate race of the season at Phoenix. Should any substitute drivers be needed in 2018, it's likely that the 2003 Cup champion will be the first one they call. 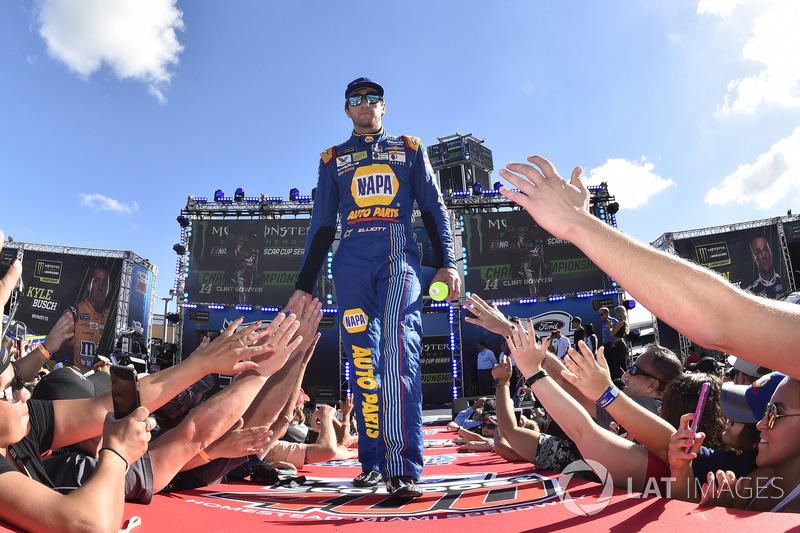 Jim: By all accounts this was Elliott's breakout season in Cup, by all accounts except getting a victory. His popularity, already sizable, only soared after his run-ins with Hamlin.

Lee: No, Elliott didn’t win in 2017, but his overall performance was dramatically better than his three Hendrick Motorsports teammates. His 12 top fives and 560 laps led were more that Jimmie Johnson, Kasey Kahne and Dale Earnhardt Jr., combined.

Nick: Elliott still hasn't won his first race yet, but he got extremely close on more than one occasion in 2017. In fact, if he was able to hold on to the lead late at Phoenix, he would have battled for the championship in the finale. The young driver carried Hendrick Motorsports through the last part of the season and stole the headlines as he locked horns with Denny Hamlin. He will capture his first checkered flag very soon. 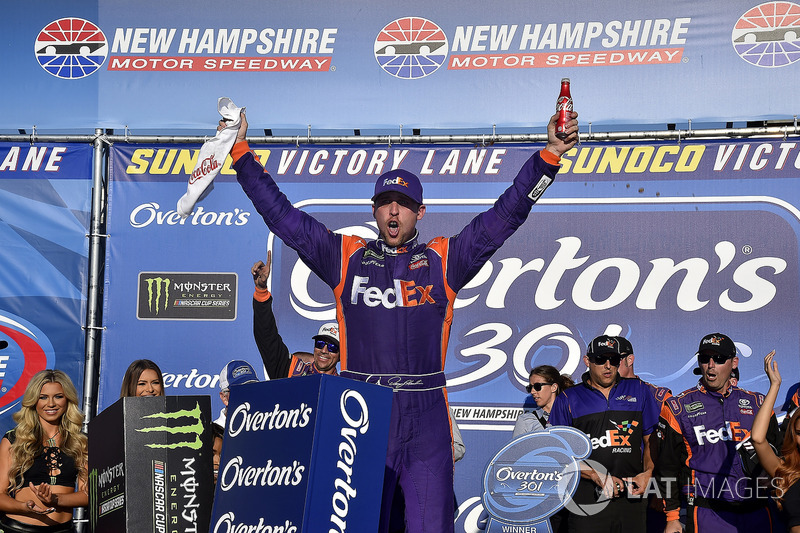 Jim: Hamlin was never able to get as much out of the season as his teammate, Busch, and his "feud" with Chase Elliott cost him dearly in the end.

Lee: In the most competitive equipment in Cup, Hamlin couldn’t break out of the shadow of Truex and Busch. Still, he earned two wins, tied Keselowski and Larson for second-most top fives (15) and ranked third with Busch for second-most top 10s (23).

Nick: Hamlin's 2017 is a season of what could have done. Had he not erred in dumping Chase Elliott for a win he ultimately failed to get at Martinsville, he would have been part of the final four and could have ended the year on a very high note. Despite this, he still ended up sixth in the standings with two wins.

Tim: The most decorated active Cup driver yet to win a title. He showed flashes of hope as he hunted that elusive crown, but his dust up with Chase Elliott cost him dearly during the second half of the playoffs. He also picked up a pair of wins. 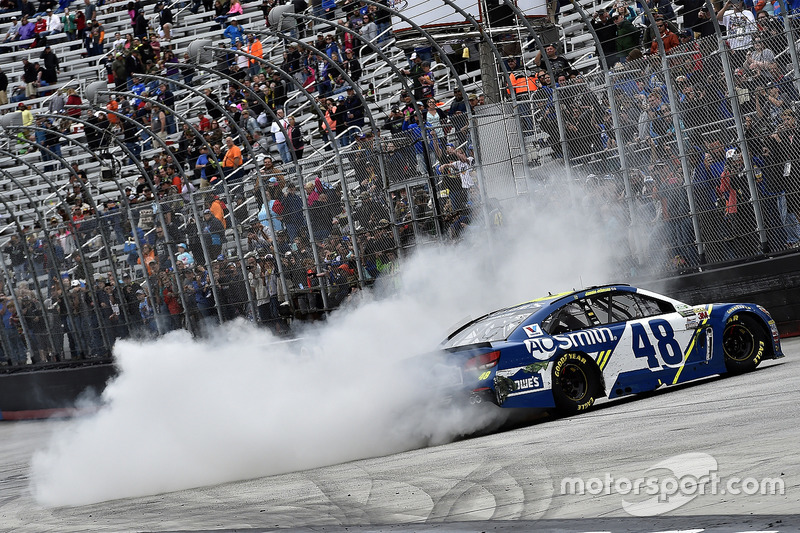 Jim: Not the greatest of season's for Johnson and his No. 48 team but regardless, he still won three races and stayed in the hunt for a NASCAR-record eighth series championship.

Lee: There’s no nice way to sugarcoat Johnson’s worse season since advancing to full-time Cup competition in 2002. Sure, the No. 48 team won three races but the seven-time champions—perhaps the best when it comes to facing adversity—couldn’t redeem themselves in 2017.

Nick: Johnson's season can be split into two parts. In the first half, he won three races and appeared to be in regular form. However, things fell apart for the seven-time champion as the playoffs came around, ended up tenth in the final standings.

Tim: Although he didn't win an eighth championship, he was able to make the playoffs and win three races during the season. Even though you can never count him out, his team just seemed to be a tick off this season. 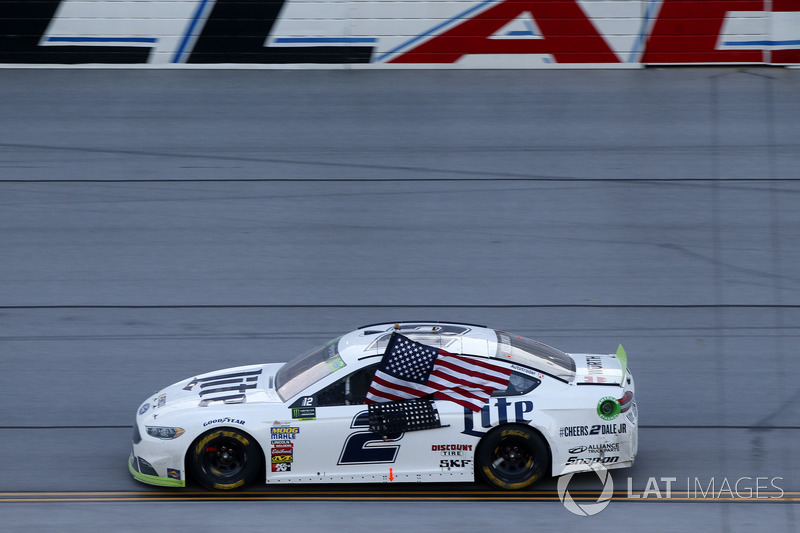 Jim: Keselowski seemed to be hit-or-miss during the season. There were times when he clearly had a fast car but even without that he did a good job capitalizing on the winning situations he found himself in during the season.

Lee: Keselowski came on strong at the start of the season—winning two of the  first six races—but the team lost steam along the way. His Talladega victory—and third win—propelled Keselowski to the Round of 8, but he was riding on fumes by the time he reached the final four.

Nick: The No. 2 team hit their stride at the perfect time, sneaking their way into the final four and ended the year with three wins.

Tim: The former NASCAR Cup champion won three races and found a way to get more speed in his car just in time for the playoffs to become a contender and member of the final four at Homestead-Miami Speedway. 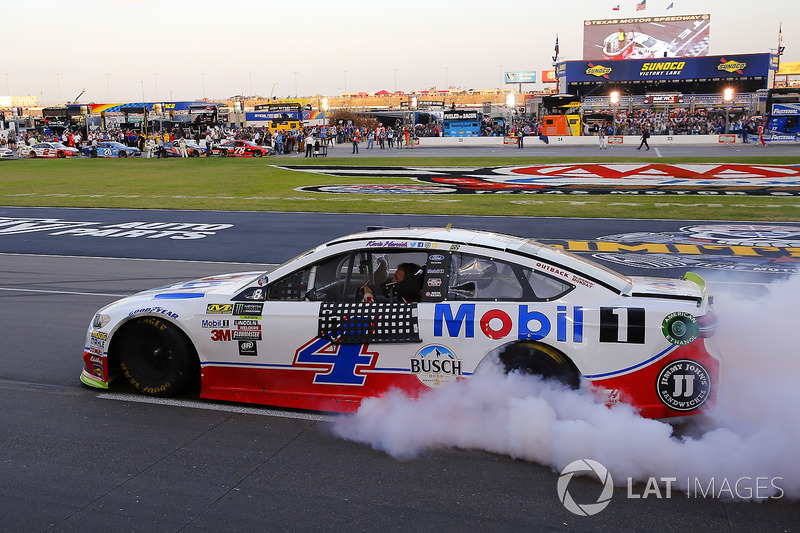 Jim: He got off to a slow start - and no surprise since the Stewart-Haas Racing organization changed manufacturers in the offseason. By the end of the season, however, he was battling toe to toe with Truex, even capturing a win from him at Texas.

Lee: Harvick became hot when it counted—in the post-season. Although the transition from Chevy to Ford was a challenge and the No. 4 team did not amass spectacular results, Harvick had enough in the tank to transfer to the Championship 4 for the  third time in the fourth year of the format.

Nick: It took Harvick 34 races into the 36-race season to win his first oval race, but it came at the right time. At Homestead, he battled for the crown and ended up third in the standings. It was far from his best year, but considering SHR's switch to Ford, it was impressive enough to get him this far up in our rankings.

Tim: The former NASCAR Cup champion won two races and once again became a contender for the championship with a late-season turnaround. 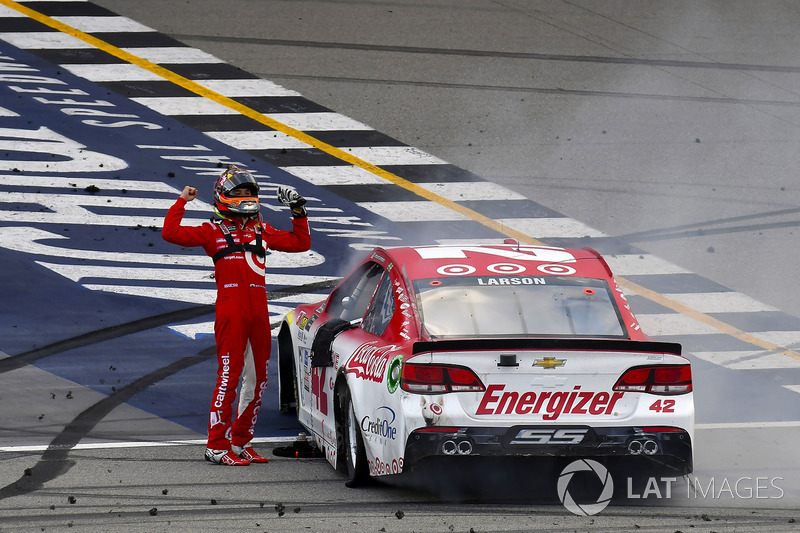 Jim: For much of the season it looked like it would be Truex v. Larson for the championship. Clearly, it was Larson's best Cup season but when it counted most - in the playoffs - he and his team ran into problems, some self-inflicted. Experience will help him tremendously.

Lee: Larson ranked third on the Cup tour in wins (four), laps led (1,352) and playoff points. But when the Playoffs came, four DNFs including two engine failures led to the No. 42 Ganassi Racing team’s demise.

Nick: Larson appeared to be the one guy that could take the fight to Martin Truex Jr. on a regular basis, but mistfortune found him in a big way when the championship playoffs came around. He won four races, but all came during the regular season. He actually suffered four DNFs in the final five races, but no doubt he'll be back with a vengeance in 2018.

Tim: 2017 was a breakout season for this driver, scoring four wins during the Cup season. 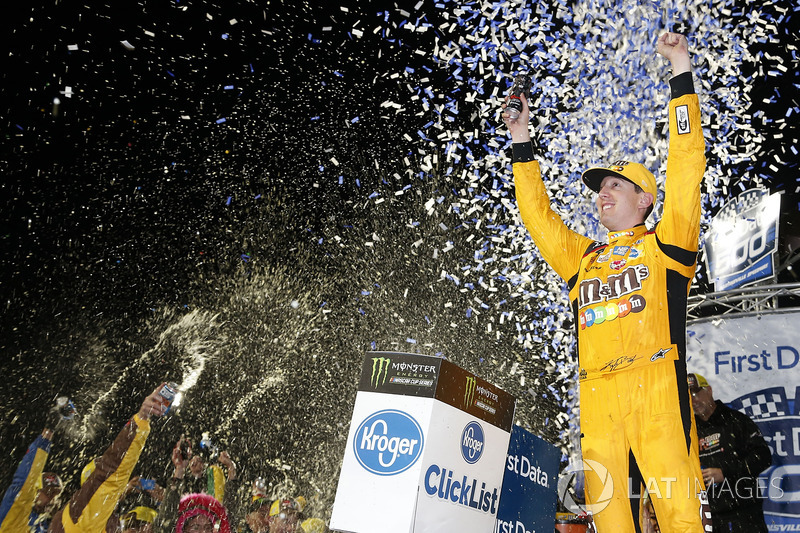 Jim: Another driver with a slow start - remember when the storyline was Joe Gibbs Racing teams had won no races? - he proved at times to be as equally as strong as Truex, just not as consistently. That's probably the only thing that prevented his second championship.

Lee: Busch is the most talented driver in the Monster Energy Cup Series—but in the final 30 laps at Homestead Truex was better. In equal equipment, Busch’s eight poles topped the tour and his five wins and 2,023 laps led (19%) were second only to the No. 78 Toyota (21.3%).

Nick: It took him over the half the season to find Victory Lane, but once he finally, Busch kept returning. However, even the great season he enjoyed wasn't enough to match the man who defeated him for the crown.

Tim: Nobody won more NASCAR national series races in 2017 than Busch. The veteran driver won five Cup races, five Xfinity and three Truck races on his way to finishing one spot short of the Cup title. 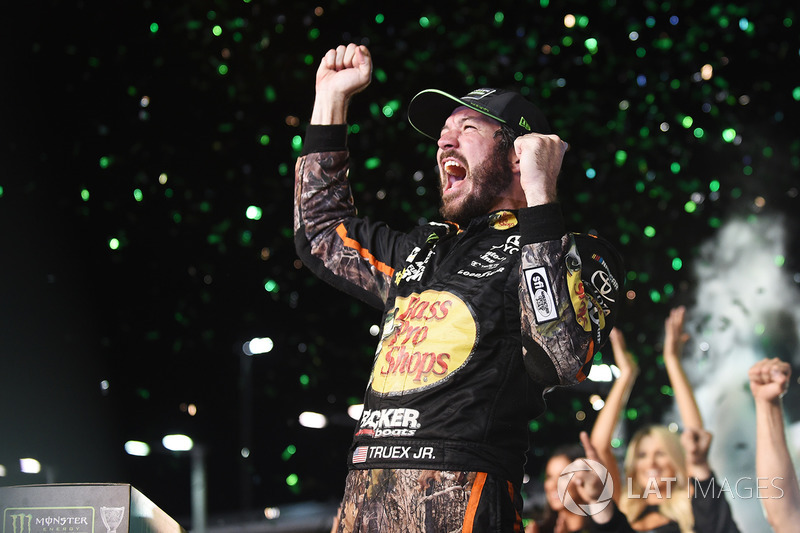 Jim: He did what even some of the most successful drivers have never accomplished in their careers - he and his team dominated the competition almost every single weekend of the season, led the most laps, won the most races and capped it off with the championship. It doesn't get any better.

Lee: There’s no doubt that the lucky horseshoe found a home with Martin Truex Jr. in 2017. The champion took the advice, ‘The harder I work, the luckier I got,’ to heart. His effort paid off with not only with career-best results, but a series-high eight wins, 19 top fives, 26 top 10s and 2,253 laps led.

Nick: The only choice for the No. 1 slot. In fact, I would have been tempted to put him here even if he failed to win the title. His 2017 season was incredible, winning eight races and leading well over 2,000 laps. I wouldn't be surprised at all if we were in for a repeat performance next season.

Tim: The obvious choice with his championship and a remarkable performance throughout the entire season. He finished with eight wins – the most since Denny Hamlin won eight in 2010.