ALL IN THE INDY FAMILY: Toyota driver Casey Mears is competing this season for Germain Racing behind the wheel of the No. 13 GEICO Camry. Mears is no stranger to success in his nine-year NASCAR career. The 33-year-old Bakersfield, Calif.-native has earned one NSCS win (Charlotte 2007), 12 top-five finishes and 46 top-10 results, along with three poles. His father, Roger Mears, earned countless off-road racing championships and began his career in stock cars in the 1960s. Rick Mears, Casey’s uncle, is a four-time Indianapolis 500 winner, a three-time Indy Car champion and holds the record for the most poles (five) at Indianapolis Motor Speedway. 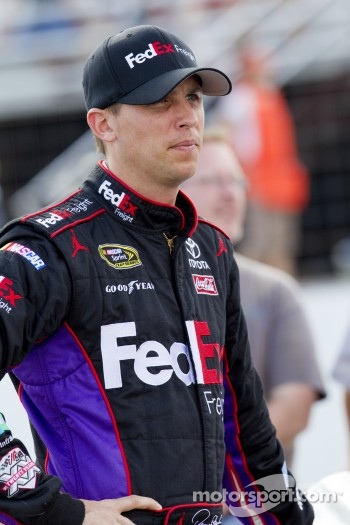 HOOSIER HANDLES THE CALLS: Camry crew chief Chad Johnston, who works on the Michael Waltrip Racing No. 56 Camry driven by Martin Truex Jr., is from Cayuga, Ind. Growing up in Indiana, he raced open-wheel midgets on paved ovals and dirt tracks around Northern Indiana. Johnston’s love of racing began at an early age when his father would take him to the drag races in and around Indiana.

PASTRANA TO PERFORM: X Games athlete Travis Pastrana is set to make his NNS debut at Lucas Oil Raceway this Saturday. The 27-year-old Annapolis, Md.-native will drive the Pastrana-Waltrip Racing No. 99 Boost Mobile Camry, while also competing in the X Games in Los Angeles. This season he’s competed in four NASCAR K&N Pro Series East and West races (Iowa, New Hampshire, Phoenix and Richmond), in addition to finishing sixth in his NASCAR debut in the Toyota All-Star Showdown in January at Toyota Speedway in Irwindale, Calif.

NASCAR Sprint Cup Series (NSCS): Since the start of the 2011 season, Toyota drivers have combined for four victories, 23 top-five results, 45 top-10 finishes and have led 1,749 laps … After 19 races, Kyle Busch is fifth in the series point standings, 20 points behind leader Carl Edwards … Denny Hamlin (10th), Kasey Kahne (14th) and Joey Logano (18th) are also in the top-20 in the standings … The first Toyota victory at Indianapolis Motor Speedway was earned by Gil de Ferran in the 2003 Indianapolis 500 … Casey Mears set the NSCS qualifying record in 2004 at Indianapolis (186.293 mph) … Jeff Koons, who provides pit support for the No. 18 Camry, for Joe Gibbs Racing is from Greenfield, Ind.

How important is the last off-weekend of the season before Indianapolis? “It’s good because that’s the week that the teams prepare their cars for the Chase and which ones they’re going to designate for the Chase. For the guys that are on the cusp of making it or not making it, that is when they’ll be bringing all their best stuff to the race track to try to get into the Chase and maybe get a win. It seems like everyone comes with new revelations at Indy -- new race cars, new designs, things like that. That’s always the turning point of our season where we start to see whose really got speed toward the end of the year.”

What does it take to be successful at Indianapolis? “That’s probably one of the trickiest places we go on the schedule -- Pocono and Darlington being others. It’s so hard to find a particular line that really, really works for you or really works for your car because the groove is so narrow. It’s plenty wide for one or one-and-a-half cars, but the line that you run around, you vary six inches and it feels so different. You really have to be particular in hitting your marks and getting your car setup. The way that it changes throughout the weekend -- the trajectory of the corners changes. Indy’s definitely a particular race track and it’s exciting for us all to go there, especially with the history and the prestige of winning that event. I’d love nothing more than to win there. It would be something cool. Been close a couple times, but would like to get a little closer.”

What is your fondest memory of racing at Indianapolis? “I’ve had some good cars there in the past. I love that place with all the time there with my Dad when he ran there, and my uncle has obviously had a lot of success at that track. It’s a special place for the Mears family and I always enjoy going back. The first day that I was there to actually get to run around the track in a Cup car -- it was pretty special. I’ll never forget sitting on the pole -- it was one of the most amazing feelings because of all the family history we have there. The fans are so close because they’re right up against both walls -- you could just hear them going crazy that a Mears was on the pole again at Indy. It was a special feeling and I always look forward to going back there.”

NASCAR Nationwide Series (NNS): During the 2011 season, Toyota drivers have combined for eight wins, 22 top-five results, 53 top-10 finishes and have led 1,201 laps … Kenny Wallace (seventh) is the top Toyota driver in the NNS point standings … Steve Wallace (eighth), Michael Annett (ninth), Brian Scott (10th) and Joe Nemechek (15th) are also in the top-15 in the standings … Toyota earned it’s first-ever Camry victory in the NNS at Lucas Oil Raceway (LOR) at Indianapolis in 2007 with Jason Leffler behind the wheel … Camry driver Kyle Busch has three victories at Lucas Oil Raceway (2004, 2008 and 2010) … Steve Wallace has three top-10 finishes in the last three races at LOR -- 10th in 2008 and 2010 and fifth in 2009 … Travis Pastrana will compete in seven NNS races this season, including racing at LOR this Saturday … The other races include Richmond (Sept. 9), Dover (Oct. 1), Kansas (Oct. 8), Texas (Nov. 5), Phoenix (Nov. 12) and Homestead-Miami (Nov. 19) … Ryan McKinny, car chief and rear tire changer for Michael Annett’s No. 62 Camry, is from Anderson, Ind.

What expectations do you have at Indianapolis? “I’m going to try to go out to Indy like I did at Irwindale -- I really don’t have expectations. I have to drive the car the best that I can without overdriving it. If we get a top-20 -- I shouldn’t say happy because no driver is ever happy unless they are on top of the podium, but that would be really good for us. I’d like to stay on the lead lap and I think that’s going to be a difficult goal. That means we’ll have to keep the car together. I have a tendency to overdrive the cars and they said that this track is really hot and has a tendency to wear the tires out really quickly. I’ll need to slow myself down to be more competitive.”

What is the biggest challenge for you in NASCAR? “For me, from what I’ve gathered so far, the biggest challenge is going to be just getting seat time. I knew this first year was going to be tough because we’ve had so much else going on. I have the people in place to be able to get seat time and really be able to learn this faster than someone without the background that I have coming in. I just have to take this, utilize this awesome opportunity and when it comes down to it, I’ve put a lot of stuff on hold or stopped and I’m willing to do that because I want to figure out how to make this car go faster than all the other cars that I’m racing on the track.”