Joey Logano started on the pole and led five times for 44 laps (of 200) around the 2.5-mile Pennsylvania track, however the No. 20 Camry had a tire go down late in the race and Logano finished 26th.

Busch gained one position and is now third in the unofficial NSCS point standings -- 11 points behind leader Carl Edwards, and Hamlin ranks 11th in the standings. 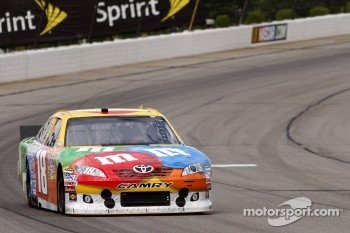 How was your race today? “It was a good day considering everything. Awesome opportunity to come out of here with a good day. Wish we could have got a win to get in the Sprint Showdown as well as just get another win to seat ourselves for the Chase. Missed it and just hate it for the guys -- this M&M’s team, all these guys, Interstate Batteries on this Toyota. They did a great job -- Dave (Rogers, crew chief) and everybody, pit stops were flawless. If I had to do it over again, I’m not sure that I would change anything. I felt like the inside was my lane. I’ve been running down there and lower all day. Just got bogged down with the 48 (Jimmie Johnson) trying to pass me. If I could have got a push then I might have been able to stay alongside the 2 (Brad Keselowski) and beat him, but that’s racing. That’s what we’re all out here doing is to get all we can get. Thanks to Sprint, Gillette, NOS Energy Drink, the fans -- this was fun for them to stick around and I appreciate them staying here with us for the rain delay.”

Are you disappointed you aren’t in victory lane? “Not what we wanted for sure. Unfortunately, there on that restart I don’t know that I changed anything. I thought the inside was good for me. I’d been running down lower in turn one all day and just Jimmie (Johnson) got to my inside there and kind of slowed me down, down the straightaway. It’s racing. That’s why we’re here, that’s why we’re running as long as we are and as hard as we are. Can’t say enough about all of these guys. The M&M’s Camry was flawless. Just didn’t have enough there at the end. I think track position and clean air was pretty crucial. We had a good day. We come out of here with a toptwo. Wish we could’ve won. Maybe we can get another one in the next couple of weeks.”

How much did the track change after the rain delay? “From the beginning to about halfway there it changed a lot and we were expecting it to go through the same swing actually it did there. I felt that I was getting a little bit looser there at the end and that might have been why I lost -- just not being able to get the power down on the exit of the turns. I just couldn’t keep up with the 2 (Brad Keselowski). He was really good at modulating the throttle and getting the pedal down and just being able to get away from me.”

How was your race? “Chad (Johnston, crew chief) made a good call on the final restart to get more speed out of our NAPA Toyota. This weekend we learned a lot. We have a good set up for qualifying, but have a little more work to do to get it balanced for the start of the race. Our first half of the race wasn't pretty, but by halfway, Chad got it dialed in to the point we were competitive and had a chance to contend for a top-10 finish. It was a good rebound all and all and I’m looking forward to running the road course in Watkins Glen.”

What do you need to do to have a shot at the Chase this year? “The bottom line is we just need to start winning and we need to find some consistency. I feel good about the race today. We had a good practice on Friday and we learned a lot of stuff about our car. We started the race and it was just crazy how much different it was than what we had in practice. So, we fought that a bit but we still have some more things to figure out and to learn, but we’re working hard and all of the guys are sticking behind me. We’re doing the best we can. Just keep digging. That’s the name of the game. Just keep working hard and make some things happen.”

What happened on the final run to the 20 car? “We just had a flat. We must’ve run something over on the race track. You can’t predict that. We made the right call by staying out. Only one person lost one position that was up where we were. I don’t think the guys that took tires passed anybody. We had a good car and we had a better car on the longer run. We kind of needed that restart to get bunched back up. Obviously, we needed air in our right rear (tire). We must’ve run something over, had a cut in it and then when he (Joey Logano) came in we only had eight pounds in it so it was definitely going down.”

How much of a difference was there in the track conditions after the rain delay? “I think the race track changed a bit and then it was starting to come back to where it was. When it rains it washes some of the rubber off, plus they had all of the fumes and stuff from the jet dryers putting it on there makes it slick. With that being said, it changed a little bit, but it kind of came -- right before that yellow came back out our lap times were pretty good. We were catching a couple of guys in front of us. For us, we were just hoping it was going to go green.”

How do you handle the disappointing finish today as a crew chief? “I’m going to get on a plane and go home and get up at 4:45 tomorrow morning and go to work like I do the other 355 days a year. What can you do? We did all we could. We sat on the pole, we led a bunch of laps, we had a very respectful top-five car. I think one of our better performances in the last two and a half years so I’m not going to hang my head and be miserable over something on the race track. I can’t control that. If it was something that we did and made a bad call it would be different than that. Right now, we learn and the last thing I want to do is walk out of here with a bad attitude and kill the momentum that we’ve had in the last six to eight weeks.”

What happened to take you out of the race? “We lost an engine, but I’m not sure exactly what it was or what the cause was and I don’t want to speculate on that. It was tough. I think we had a good car. We missed a little bit on qualifying. We were hitting the race track and missed a little bit on the splitter with the increase in speeds. The track was so quick yesterday. It’s a shame. The Red Bull Toyota guys have been working really hard. We just haven’t had things go our way lately.”