Indy’s Familiar For the Woods, a New Challenge for Bayne

This year’s Brickyard 400 is especially significant as it’s being run in the year that Indianapolis Motor Speedway celebrated the 100th running of the Indianapolis 500. For the Wood Brothers and their Motorcraft/Quick Lane crew, the history of the Indy 500 is also part of the team’s history. In 1965, at Ford Motor Company’s request, the Wood Brothers went to Indy to pit the Lotus-Ford driven by Jim Clark.

The Woods stunned the open-wheel racing world with the speed of their pit stops and helped propel Clark and his Lotus-Ford to victory in the world’s most famous race. 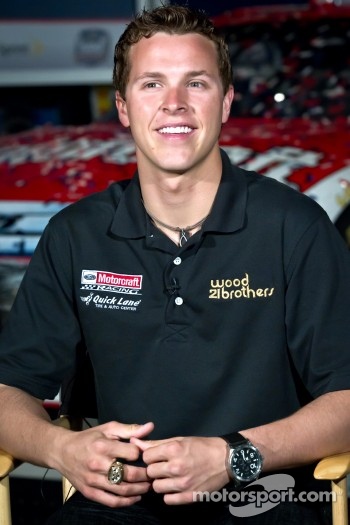 The Woods also have raced their No. 21 Fords at the Brickyard, with a fair amount of success. Morgan Shepherd recorded a top-10 finish for the Woods in the inaugural Brickyard 400 back in 1994 and backed it up with another top-10 the next year. And two years ago, Bill Elliott qualified the Motorcraft Ford fourth; the team’s best starting spot that season.

Team co-owner Eddie Wood said that despite the pressure the team and rookie driver Trevor Bayne will be facing due to the fact that they’ll have to qualify on speed, he’s anxious to get back to the Brickyard.

“It’s the second-most important race of the year, behind the Daytona 500,” Wood said. “We’re looking forward to being there. That track has so much history and heritage. It deserves a lot of respect.”

History and heritage also are behind a special logo that will adorn the Motorcraft/Quick Lane Ford Fusion beginning this weekend.

The decal will honor team founder Glen Wood and his recent selection as a 2012 inductee into the NASCAR Hall of Fame in Charlotte.

But foremost on the minds of the Woods and the Motorcraft/Quick Lane team are doing what they need to do to earn a starting spot for Sunday’s race.

It’ll be a challenge for Bayne.

“Having never raced there,” Wood said. “There will be a lot of pressure on him.”

But the Daytona 500 winner has been working hard getting ready for his Indy debut. He’s been running the track on a computer simulator and studying data from previous races.

Wood said the Indy schedule works in Bayne’s favor. There are two practice sessions on Friday and another Saturday morning before qualifying begins Saturday afternoon at 2:10 p.m.

“We’ll all work together to get him acclimated to the track,” Wood said.

Could this be the year that Roger Penske pulls off the IndyCar/NASCAR double?

Breaking down a racing incident that got blown out of proportion