Truex just misses out on victory in "bittersweet" Southern 500 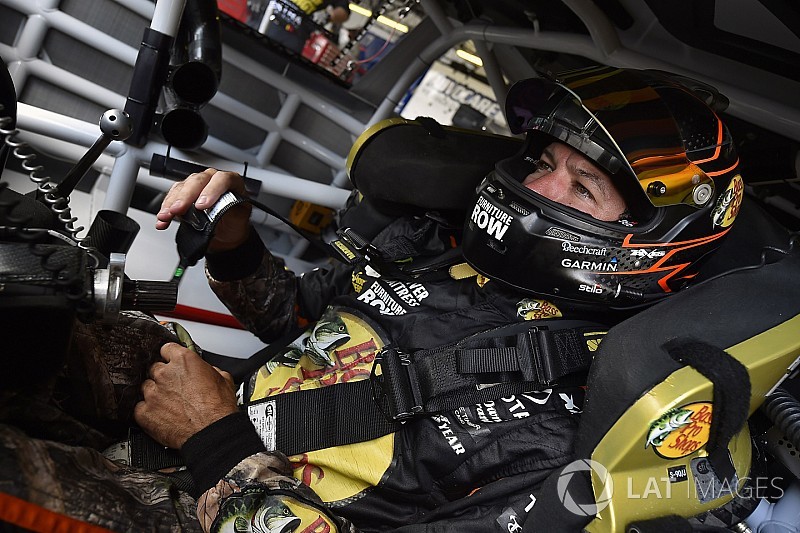 Martin Truex Jr. leaned against his No. 78 Toyota, folded his hands on the roof and briefly rested his head.

Truex was in good position to hold off a fast-approaching Denny Hamlin but his worn-out right-front tire let go with two of 367 laps remaining in Sunday night’s Southern 500 and he scrubbed the wall.

It was enough to allow Hamlin to scoot around him for the lead and the victory and Truex limped home to an eighth-place finish at Darlington (S.C.) Raceway.

It wasn’t all bad, though.

Truex picked up two more Stage victories in the race and clinched the regular-season title with one race still remaining, which will give him an additional 15 playoff points when the 10-race sprint to the championship begins in two weeks.

“It’s just a tough one, man. Sometimes things just don’t go your way,” Truex said after the race. “We took the lead four or five different times in the race. We had a phenomenal race car on long runs. It was just two laps too long.

“I didn’t see that coming. We didn’t really have any issues all night long with the right-fronts. Circumstances were a little bit different there at the end with that long green-flag run.”

Truex used a last-lap pass of Kyle Larson to win the first Stage and won the second under caution. By the end of the second Stage he had already accumulated enough Stage points to clinch the regular-season title.

He passed Kurt Busch to take the lead for the final time after the final round of green-flag stops but Hamlin, who missed pit road the first time he attempted to make his stop, was quickly approaching with about 11-lap fresher tires.

Still, it appeared Truex would hang on for his fifth Monster Energy NASCAR Cup Series victory of the season were it not for his flat tire.

“I think we could have held him off,” Truex said. “When I got a little bit of clean air I could hold my own. The car was getting worse and worse every lap. I was just getting so loose.

“It was a huge challenge. If we had pit one or two laps later it would have been a different race and we would have had it.”

Still, Truex was proud of what he and his Furniture Row Racing team has been able to accomplish so far this season – and that they will be rewarded for it when they being their quest for their first series championship.

“Clinching the regular season is really, really tough, especially running at the level we have all season long,” he said. “To be in contention like we have – on the race track, on pit road, engines, just the whole nine-yards.

“I’m just really proud of what this team has given me, the opportunities they’ve given me each and every week. It’s nice to go out and drive your heart out and it actually gets you somewhere.”