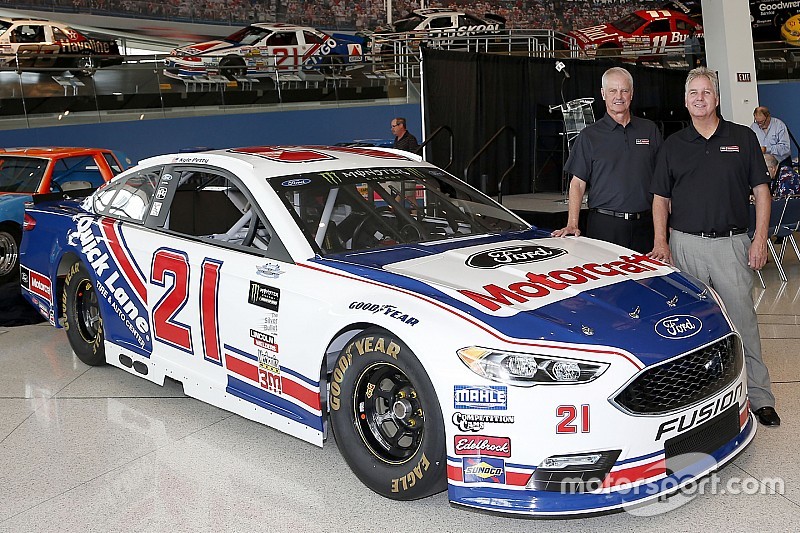 Kyle Petty knows something about racing as a family business.

The third-generation racer started his career under the Petty banner and then moved to another family-owned team — the Wood Brothers — in 1985.

Driving the No. 7 7-Eleven Thunderbird, Petty earned his breakthrough Cup win with the Stuart, Virginia-based team at Richmond in 1986. But it wasn’t until 1987 that Petty posted his first-career win behind the wheel of the iconic No. 21 Ford in the Coca-Cola 600 at Charlotte Motor Speedway.

Wood Brothers Racing will honor the accomplishment with a throwback paint scheme reflective of the No. 21 Citgo Ford — complete with Kyle Petty’s name above the driver’s side door — which at the time was a novelty for the young driver.

“I was so excited to drive the 21 — and then we got a sponsor (7-Eleven) and changed the number to 7, and it teed me off. Finally, we got to go to the 21 — and I won. These guys gave me an opportunity to drive a car that was winning races…I drove a car for my dad, but it was the second car.”

Racers have been known to be superstitious. And Petty acquired his own lucky charm while driving for the Wood Brothers — albeit a lucky charm of the unorthodox variety.

“I had a lucky pair of underwear that I wore when I drove this car, cause I won a race,” Petty said. "Win a race, wear the same underwear. Made sense to me. I left them on the truck and Terry Hall (Kim Wood’s husband) threw ‘em in the dumpster. So, I left home in Level Cross, (NC) where I lived and drove like two, two-and-a-half hours, and dug through the dumpster and got my underwear out.

“Nobody wanted to touch my underwear because they were sweaty and had been in the dumpster. So I put them in Clorox. Little did I know that if you leave them in Clorox overnight, they’d deteriorate pretty bad. So all that was left was the band — with a little bit of cloth on it. I wore it the rest of the year.”

Petty had more staying power than his underwear. He spent four seasons with NASCAR’s longest-running active team. Reflecting on his time with the Wood Brothers while at the NASCAR Hall of Fame on Tuesday, Petty was reminded of how close-knit the clan was during his tenure and still is today.

“To drive this car was a real, real big deal for me personally, because as almost everyone in this room knows, it was Richard Petty, Dale Inman and Petty Enterprises against Glen and Len Wood and David Pearson for so many years — that was the rivalry. So for me to leave there and to come here was really special. So this is a huge honor. Thank you, Wood Brothers Racing. This is really special to me.”

Menards to partner with Ryan Blaney and Penske in 2018