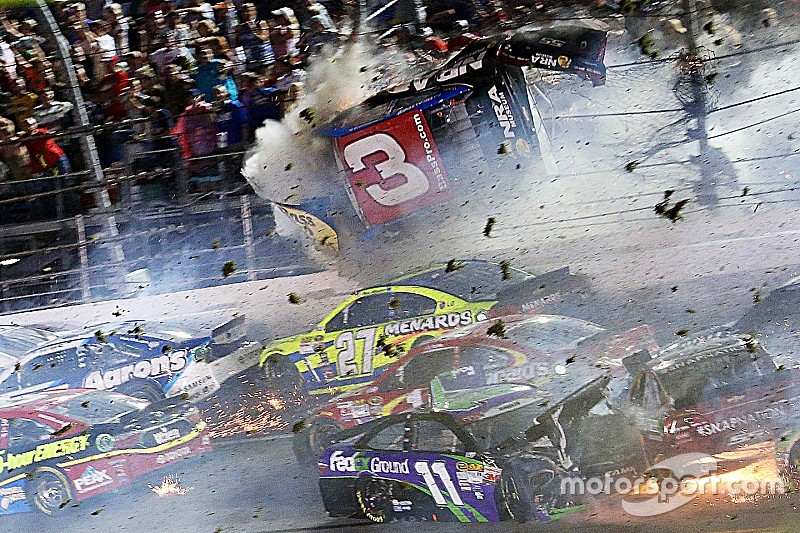 Talk about baptism under fire: The NASCAR Sprint Cup Coke Zero 400, NBC’s first NASCAR Sprint Cup broadcast since 2006, finally signed off at 3:04 a.m., but any fan who made it to the last hour and turned off the TV missed a stunning finale.

Not just because of the wrenching finish-line crash that sent Austin Dillon into the catch fence, and one fan to the hospital due to injuries from flying debris, but because the final 25 laps were some of the best action we’ve seen this year.

The 200-mph chess game that is restrictor plate racing did not fail to serve up plenty of drama, even after a rain delay of more than three hours. Dale Earnhardt, Jr., was clearly the class of the field from the drop of the green flag, challenged only by Jimmie Johnson, and even that challenge seemed ineffective. Would Earnhardt prevail, or would challengers somehow mount a sufficient head of steam to pass him in the draft? No contest: Earnhardt’s car had so much power, and handled so well, that it was in the end one of the most dominating performances of his career, leaving hot drivers like Johnson, Kevin Harvick and Martin Truex, Jr. in the dust.

And that horrific last-lap crash that had Denny Hamlin’s car spin to the inside, revolve and then drop-kick Austin Dillion’s number 3 into the catch fence as though the car was making an upside-down field goal: Anyone who didn’t wince, and at least say a quick mental prayer for those involved, is watching the wrong sport. To see a dozen crewmen run to the upside-down shell of a Chevrolet, then see the thumb’s-up from them as they signaled that Dillon was OK, was so far the Racing Moment of the Year.

And NBC’s coverage of it was spellbinding, too, not just for the action, but for the close-ups of, say, Dillon’s engine and transmission, completely separated from the car, sitting there on fire. Most all of America has seen the replays, but live, it was different. In all, the photography and direction of last night’s race was some of the best I’ve seen.

NBC showed class in how they handled the crash, mirrored by Earnhardt’s solemn victory-lane celebration – “I’m more thankful that everyone’s okay than I am to be here in Victory Lane,” Earnhardt said, and you know he meant it. An Earnhardt wins, the number 3 Chevrolet crashes hard – far harder than Dale Sr.’s number 3 did in his own fatal accident there February 18, 2001 – and the driver walks away: Chilling, especially to those of us who were there at the track 13 years ago.

There was, however, some room for improvement. NBC brought the same 5.1 surround sound it uses in IndyCar and Formula One, and at times, there was too much ambient track noise, at the expense of the announcers in the booth, and a general uneven quality that had you reaching to turn the volume up and down depending on what was on screen. According to Sports Video Group, NBC had 214 microphones at the track – they didn’t have to use all of them.

And as for the announcers: Rick Allen, the anchor, is as steady as they come. No improvement needed. But with two rookies by his side – former Hendrick crew chief Steve Letarte and driver Jeff Burton – it might have been better for him to take more of a position of leadership, as three equals in the booth leads to some confusion.

And I’m not the first to say this, but Burton and Letarte can sound remarkably alike, and at times – especially when they were speaking over that aforementioned ambient sound – it was hard to tell if what you were hearing was a continuation of a thought from one of the analysts, or a new observation. Perhaps Karl Malone, sound director for the NBC broadcast, can make some minor electronic tweaks, but it isn’t a big deal.

Also we need a little more from Burton specifically regarding what the drivers are facing, from Letarte what the crews are experiencing, and less general observation.

Still, it was a solid first effort under very trying circumstances. Viewers waited way too long for a final finishing order, but otherwise, the highlights outweighed the negatives. The photography, direction and editing of the finish-line crash was excellent, and just prior to that, the slow-motion of Sam Hornish’s trip through the grass couldn’t have looked better if it was staged.

Without a doubt, NBC is seeking to make its NASCAR broadcast more professional, less down-homey in an attempt to draw a solid line between themselves and Fox. And they did.

One of the reasons I’ve always liked the long-underrated Rick Allen on the ARCA broadcasts is his steady hand, but I could have used a little more excitement as Trevor Bayne and others were making the lower line work slowly but steadily, as they closed in on Earnhardt. We’ve become so accustomed to British open-wheel and sports car announcers who scream about a third-lap pass as if it’s the run-to-te-checkers in the Indianapolis 500 that a properly measured delivery now seems underplayed.

On pit road, Marty Snider, Kelli Stavast, Mike Massaro and Dave Burns did some solid work. Krista Voda did a nice job of moderating Kyle Petty and Dale Jarrett in the long pre-race show, but it became tedious, understandably, since there was so much of it.

Overall, though, I have to give NBC a solid “B” for its first NASCAR Sprint Cup broadcast in a decade, especially given the trying circumstances. Ratings will be meaningless due to the delays and the holiday weekend, but I suspect this group will find a sizable audience soon enough -- most likely next weekend, when the crash, Dale's win will shine a lot more light on the race at Kentucky than anyone contemplated. NBC scored big with the people who matter -- dedicated NASCAR fans.

Earnhardt acknowledges and accepts the dangers of racing