RICHMOND, VA - Joe Nemechek survived a late-race caution and a red flag to land his third career victory and first at Richmond International Raceway. "When you get a car that'll go that good," said Nemechek. "High, low, whatever you want it to go ...

"When you get a car that'll go that good," said Nemechek. "High, low, whatever you want it to go - it is fun. We've been so close to winning and here we are. I am real proud of this entire UAW tea, and this Chevrolet was awesome all night." 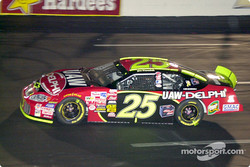 Joe Nemechek.
Photo by Greg Gage.
Nemechek was leading when the yellow waved on lap 380, setting up a potential shoot-out between the No. 25 Hendrick Chevy and the lead cars of Earnhardt, Labonte and Robby Gordon.

Only three further circuits were scored before the No. 0 Pontiac of Jack Sprague brought out the race's 15th caution on lap 391, again halting the action. A budding seven lap duel seemed in the offing, but rain began to pepper the race track.

NASCAR red-flagged the event before the restart, but the inclement weather had settled over the area, and after fifteen minutes officials called the event, awarding Nemechek the victory.

This is Nemechek's first Winston Cup win this season and first since Rockingham of 2001. The victory qualifies Nemechek to participate in The Winston All-Star Event at Lowe's Motor Speedway in two weeks.

"Getting in The Winston is cool," commented Nemechek. "These guys are pumped up. We've been talking about that. We've had some tough luck these past four or five weeks."

"Three first places would be better," laughed Labonte. "But three second places are the next best thing."

"Things are going really good right now," Labonte continued. "Obviously three second place finishes are really good for us. We've got a lot of confidence on our side. We're actually getting to the racetrack knowing what to do. It's pretty cool."

Dale Earnhardt, Jr. landed third. It is his eighth top-ten this season.

"I'm pretty happy with our finish," said Earnhardt. "We raced hard tonight. I raced Bobby a lot. That was a lot of fun - kind of give and take.

"I felt like we had a car that could make a run up on the '25' there at the end," Earnhardt said. "But, every time a caution would come out and we'd get a restart my car would drive differently every time. We kept having multiple cautions there at the end of the race and it was tight one restart for three laps and then it was loose the next restart for three laps and I just couldn't get going.

"We needed long runs and I think we were better than most of them guys."

Robby Gordon recovered from a three-lap deficit to reap his best finish this year, fourth.

"We came from three laps down to lead," said Gordon. "That's a testament to what a good team these Cingular guys are. We got a little too loose to stay up front - but man we were good."

"It was a great morale day and points day for us. The car was totally awesome to drive."

"We had a really, really, really good car," said Martin. "But we had a lot of problems. We had to go to the back. We started in the back, and then we had a bearing seize up in the firewall, we had to fix that - lucky we got that fixed.

"It was a great effort by the team."

Wrecks were the headline activity for the evening, as a track record 15 cautions slowed the Pontiac Excitement 400 for 91 laps and skirmishes collected some of the night's brightest stars.

The first yellow came early, on lap 43, as the No. 1 DEI Chevy of Steve Park pounded the wall in turn two. Bad luck continues to beleaguer Park, who has finished 20th or worse eight times this season. He now lists a dead-last 43rd at Richmond.

"We were running the outside line," said Park as he emerged unscathed from the infield care center. "We must have cut a tire down or something."

Defending race winner and reigning Winston Cup champion Tony Stewart couldn't manage to escape trouble again this week. Stewart's night ended abruptly when on lap 223, Elliott Sadler in the No. 38 RYR Ford made contact with the wall in turn two.

As Sadler spun down the track, Tony Stewart collected debris on his tires which sent him careening into the wall causing heavy left-side damage on the No. 20 Gibbs Chevy. It is Stewart's third DNF in four races. He finished 41st.

Contact also beset series standings leader Matt Kenseth at lap 232, when he incurred left-front fender damage after making contact with the No. 41 Ganassi Dodge of rookie Casey Mears. Kenseth worked his usual magic and slowly picked off the competition as he slinked his way back into the top ten, finishing seventh.

Ryan Newman encountered controversy all night long. First, while leading the race, the No. 12 Penske Dodge was black-flagged by NASCAR for excessive rear-end brake smoke. Newman gave up the top spot to Joe Nemechek at lap 98, as he came to pit road to acknowledge the penalty. After examination in the pits, Newman pulled his car behind the wall for 89 laps.

Trouble wasn't over for the No. 12 team. They were swept up in a lap 268 melee, after the No. 29 RCR Chevy of Kevin Harvick clipped the No. 30 of teammate Jeff Green. As cars checked up Rusty Wallace, Ricky Rudd and Jason Keller were also involved.

Keller, who was making his Winston Cup debut sitting in for the injured Jerry Nadeau, finished 32nd; Nadeau suffered head, lung and rib injuries in a practice crash on Friday and remains in critical condition at a local Virginia hospital.

"We all thought this was going to be our night to shine under the lights," Newman continued. "Get things back on track. Now, we need to turn it around at The Winston and if that doesn't do it for us, I don't know what will. Charlotte's our track."

Jimmie Johnson's sophomore jinx continues, this is the fourth time this season the No. 48 Hendrick Chevy has been involved in an accident during the final stages of a race while running in the top group (Johnson also wrecked at Talladega, California, Las Vegas). He finished 19th.

Tony Raines was this week's highest finishing rookie in 14th. It is Raines best finish this season.

"I'd like to race at Richmond four times a year instead of twice," said Raines. "I like this racetrack. I race good here.all in all it was a good night."