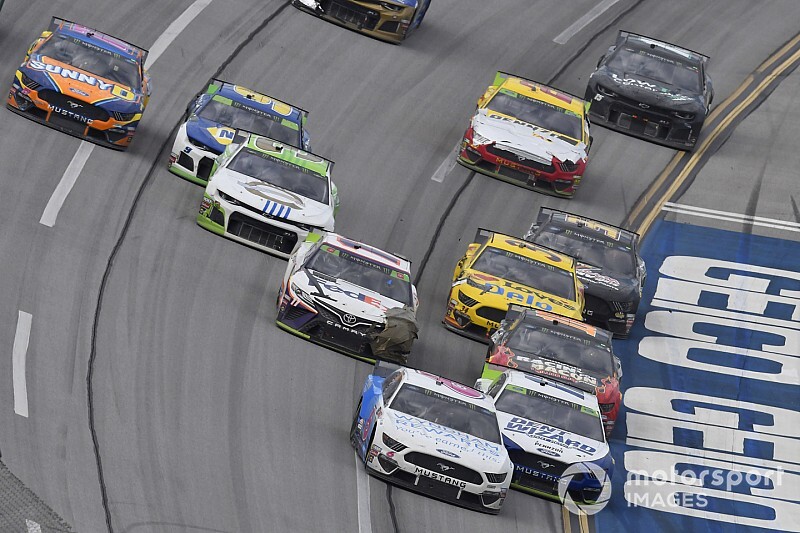 Talladega (Ala.) Superspeedway could have used one more renovation in Ryan Newman’s eyes – a finish line closer to the tri-oval.

Newman got a big push from Denny Hamlin on the last lap of Monday’s rain-delayed NASCAR Cup Series race which vaulted him into the lead and into position to win his first race of the 2019 season.

Coming through the frontstretch tri-oval – the location of the start/finish line at most NASCAR oval tracks – Newman still clung to the lead.

Ryan Blaney, however, got help from Aric Almirola and got up alongside Newman on his inside. The two made brief contact and Blaney edged him by 0.007 seconds as they crossed the line side-by-side.

“I told Aric, I said they spent $50 million redeveloping this place. I should have threw in 50 bucks for them to move the start/finish line, repainted it or something,” Newman joked after the race.

Talladega completed a $50 million renovation of its infield – including a new Cup Series garage, fan zone, camping areas and Victory Lane – prior to this weekend’s race.

“I mean, we just came up that little bit short. I don’t know what else to say,” Newman said. “I could have pinched him some more. I could have probably took the aero. You can go back and bench race that three weeks from now.

“It was a good race until the end.”

Contact between Newman and Blaney did send Blaney briefly below the double yellow lines (which are out of bounds on superspeedways). NASCAR determined Newman forced Blaney below the line and the contact didn’t warrant a penalty on either driver.

Two cars running in the back of the lead pack wrecked through the tri-oval on the last lap and a caution would have locked Newman in as the win as well. But the track was left clear and no other cars were approaching the area so NASCAR held the flag.

“I saw the guys spinning in the back,” Newman said. “I was hoping for a yellow, but there wasn’t.

“That’s special to just have a good run. We had a good team effort today; overcame a lot of obstacles, cars flying on top of us – all that stuff.

“Just proud of the team. Upset, disappointed we didn’t close it out. But we survived it. That’s a big part of this deal.”

Gaughan walks away from "easy, quick flip" at Talladega

Ricky Stenhouse Jr. "bummed" not to "finish off" Talladega win