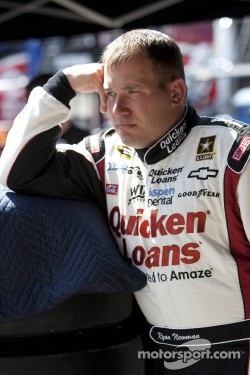 That’s just what Ryan Newman is hoping for as he turns the calendar page to June this Friday, the same day the NASCAR Sprint Cup Series takes the track at Dover (Del.) International Speedway for the 13th race weekend of the 2012 season.

Count Newman as one driver who can’t wait to put the past month, or maybe even the past two months, in his rearview mirror and focus on a fresh and improved start to the second third of the 2012 season.

Since winning at Martinsville (Va.) Speedway on April 1, Newman has had a rocky ride. In fact, in the past six weeks, Newman has one DNF (did not finish) at Talladega (Ala.) Superspeedway due to engine problems, and he hasn’t recorded a finish higher than 14th – with the exception of his 10th-place finish in the non-points NASCAR Sprint All-Star Race at Charlotte (N.C.) Motor Speedway two weekends ago.

For Newman, the month of June couldn’t get started at a better place for him than at Dover.

The high-banked, 1-mile concrete oval is a favorite of the South Bend, Ind., native. And with the exception of Kentucky Speedway in Sparta, where the NASCAR Sprint Cup Series has raced just once, Dover is the track where Newman boasts his best average finish of 11.5.

Newman’s September 2004 win at Dover was one of his most dominant performances in his 11-year Sprint Cup career.

He qualified on the outside pole for the 400-lap race but, by the end of lap one, he was shown as the leader. He showed no mercy to his other Sprint Cup competitors, leading an amazing 325 of 400 laps. In fact, Newman built a commanding eight-second lead en route to the win and claim the first-ever “Monster Trophy” given out by the track known as the Monster Mile.

While Newman had a rough go with his No. 39 Stewart-Haas Racing (SHR) team at the concrete oval last season, he does have three top-10 finishes in six starts with his SHR crew.

And thanks to a Goodyear tire test session at Dover earlier this spring, Newman & Company may have just the notes and added bit of confidence needed to get the month of June started off right. The always-tricky 1-mile track is truly a “Monster” when it comes to tire wear. Having an insight on that major component to the race is a huge step in having the winning race strategy.

After 12 races, Newman sits 13th in the Sprint Cup standings, 116 points behind leader Greg Biffle. While he has the lone Martinsville win to his credit, Newman would like to turn his season back around and start making a move upward in the points.

This weekend, Newman hopes that a new month, coupled with determination and teamwork, will help the No. 39 Quicken Loans team engineer an amazing run at Dover that will put them back on-track for a coveted spot in the Chase and earn another “Miles the Monster” trophy for his shelf.

RYAN NEWMAN, Driver of the No. 39 Quicken Loans Chevrolet for Stewart-Haas Racing:

You participated in the Goodyear Tire Test at Dover earlier this year. Can you talk about how that went and what you expect the racing to be like this weekend? Will it be any different than we have seen before?

“It was a really good tire test as far as not seeing any failures at a track that is prone to pushing a tire to its limits. The biggest thing we saw was a lack of fall-off. That’s something we talk about when we go back to a place like Dover, where what you have is what you have and they don’t really change a whole lot. This weekend we’ll see with the different conditions. It was 60 to 65 degrees when we were up there testing. It was not that hot. Hopefully, the cars will fall off a little bit more and we will have to rely on the driver pedaling the car and things like that, which has always given us a better opportunity at great racing. We’ve seen that in the past at a place like Bristol, which to me is just a smaller version of Dover. As a team, we were happy to have the chance to go test tires at Dover. Anytime you get some extra seat time at a racetrack is good, in my opinion. And we’ve struggled there the past couple of races, so I think it was a good opportunity to see if we could figure out what we could do better to get the car where it needed to be. I think we got some good notes and we learned some things that will pay dividends for us this weekend.” - This week, we head to Dover, which you have said is another one of your favorite tracks. What is it you like about Dover?

“At Dover, I like the banking. I like the elevation changes. The concrete provides a different type of racing for us because the track doesn’t change a whole lot. Once you get your car right, you can keep it right for the rest of the race. And for me, for whatever reason, I’ve always adapted well to racing on concrete. To me, the characteristics of the track make it both demanding and fun. It’s really unique how you drop off into the corners and then climb up the hills onto the straightaways. At Dover, the entry into the corners is the toughest part. If you don’t get a good entry, you’re not going to have a good middle or a good exit. You have narrow straightaways and then the track opens a lot in the corners, so there’s a good bit of give-and-take. To me as a driver, it’s just a track that’s a lot of fun. It’s a challenge. If you don’t like a challenge, you don’t like Dover. I really look forward to racing there. It’s fast, it’s demanding. I like the banked racetracks, and it’s one of those.”

How physically demanding is Dover for the drivers?

“It’s definitely pretty physically tough. It’s not as physical as the road courses – I think they are the most physically demanding – but with the banking and 400 laps, you’re just constantly maneuvering the racecar. You get just a short distance on the straightaways to take a quick breath and get ready to go back at it in the next corner. We talk about what it takes to be ‘Army Strong,’ and it’s mental, emotional and physical. To me, this is one of the most physical racetracks we go to. Mentally, because it’s so physically tough, you have to stay in shape and stay on top of things. When you hit, you hit hard there, so, emotionally, you have to be ready for a lot of things. I’ve always enjoyed it. I’ve always enjoyed the speed, banking and everything else there.”

Talk about racing at Dover.

“The first thing, the banking allows you to push the car really hard and therefore makes it a little bit easier to save it. On a flat track, it’s like on ice, once you start to lose it, it’s gone. There is some forgiveness in the racetrack because of the banking but it does taunt you a little bit to make you push the race car. The second part of it is, it’s a miniature Talladega, of sorts, because the speeds are so fast, it’s narrow, it does clean itself to the bottom but it’s a timing event depending on where the crash happens. If it’s the middle of the back straightaway or going into the corner, everybody is going to wash back up across the racetrack and then come back down across it in front of your nose, typically. We’ve seen 20-car pileups there into turn three. We’ve seen cars upside-down and some unexpected things in the past few years there at Dover compared to what is used to be. It also has the potential to be a bit of a laid-back, relaxed, drawn-out race because, if you get the cars single-filed out and everything going good and we don’t have any tire issues, typically it can be one of those that goes by really quickly and not much happens.”

Dover has changed over the years, Martin likes most of the changes