No win for Kyle Larson at Sonoma but "better than normal" 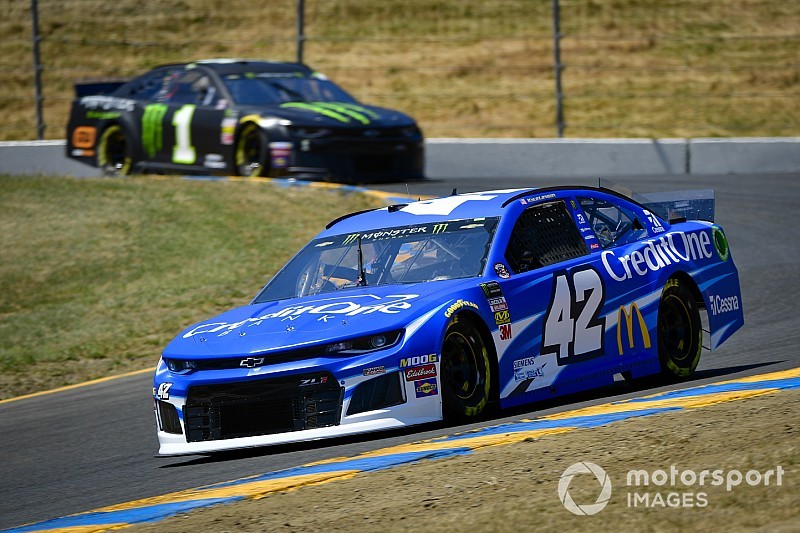 Kyle Larson’s third consecutive pole at Sonoma didn’t translate into victory but it did give him a career-best finish on the road course.

Despite starting on the pole in Sunday’s Toyota Save Mart 350, Larson wasn’t even able to lead a lap as William Byron quickly got around him and went on to take the Stage 1 victory.

Larson began to drop back and it seemed like he was in store for another Sonoma disappointment, but his No. 42 Chevrolet handled the long runs and lack of cautions well.

Sunday, however, Larson was able to come away with a 10th-place finish.

“It was better than normal for us. I fell back early but I was just taking care of my stuff. I seem to be a lot better on long runs than normal, so I’m happy about that,” he said.

“We came away with a Top 10. So it was good. I finished better than I ever have here, so it was an improvement.”

Rather than short-pitting each stage like most of the contenders did, Larson’s team elected to remain out and collect stage points. He finished fourth in Stage 1 and sixth in Stage 2.

“We were just better on the long runs. So, I was able to pass a lot of people there throughout that last stint,” Larson said. “I was happy about it. We got stage points, which was good; so it was a good point day.”

Larson continues to hold the final playoff spot in the NASCAR Cup Series based on points. After Sunday’s performance he has an 18-point advantage over 17th-place Jimmie Johnson.

Kyle Busch: Second at Sonoma "sucks" but "good for the company"