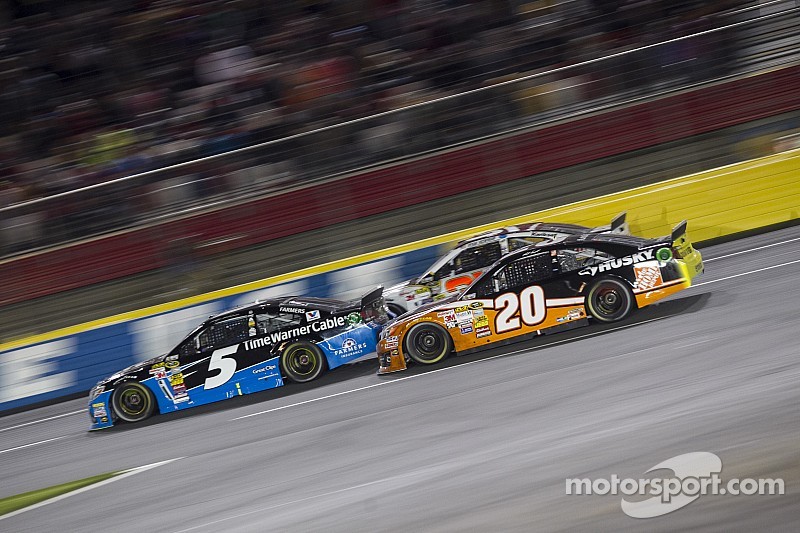 19 drivers have a mathematical shot at it going into Richmond.

On a night where several drivers’ Chase hopes hung in the balance, two drivers that hadn’t won this season managed to solidify their place inside the 2014 Chase for the Sprint Cup.

Kasey Kahne had all of the variables go right for him as he pulled away from Matt Kenseth on a Green-White-Checkered restart to win the Oral-B USA 500 at Atlanta Motor Speedway.

It was a great call by Jason (Ratcliff), great pit stops, I just couldn’t hold on

Kenseth took a gamble with only two tires on his last pit stop to gain the lead, but was unable to hold off Kahne in the last two laps of the race. He did finish second however, which was more than enough to clinch a spot in the post-season.

“We did everything we could, it was a great call by Jason, great pit stops put us in position to win, I just couldn’t hold on,” Kenseth said.

“The second one was okay, it wasn’t as good (as the first one); just spun the left rear a little bit and the 5 got up the middle there and I was able to get through one and two wide open and almost wide open through (three and four),” Kenseth said.

“The restarts really worked out for us tonight, the acceleration from my car and everything was perfect, so yeah we took advantage of those and I was really happy because I struggled with restarts a lot, that’s something I’ve worked really hard on, there’s certain times when I do great and a lot of times when I don’t.”

Tough night for some Chase hopefuls

Other drivers had shots securing a spot in the Chase tonight but came up short, such as ROTY contender Austin Dillon.  Dillon is 19th in points, 31 behind Clint Bowyer in 16th position, the final spot of eligibility after finishing 24th.

That pretty much ends our Chase hopes, unless we win

“Well, our game plan from the last few weeks was just to try and get a win, I think points are pretty far out so we’ve just got to try to win Richmond," Dillon told Motorsport.com "Our points situation is not good, and we’ve got to go to Richmond, try something and see what we can do."

Seventeenth in the standings is Kyle Larson, 24 points adrift of the Chase cut-off.

“So happy for Kasey, but that pretty much ends our Chase hopes, unless we win."

Ryan Newman and Greg Biffle, who are both winless, currently hold the final two positions. There are 19 drivers who can potentially make the Chase at Richmond, but only Larson, Bowyer, and the aforementioned Biffle and Newman could make it on points alone.

Record-breaking run for Danica at Atlanta