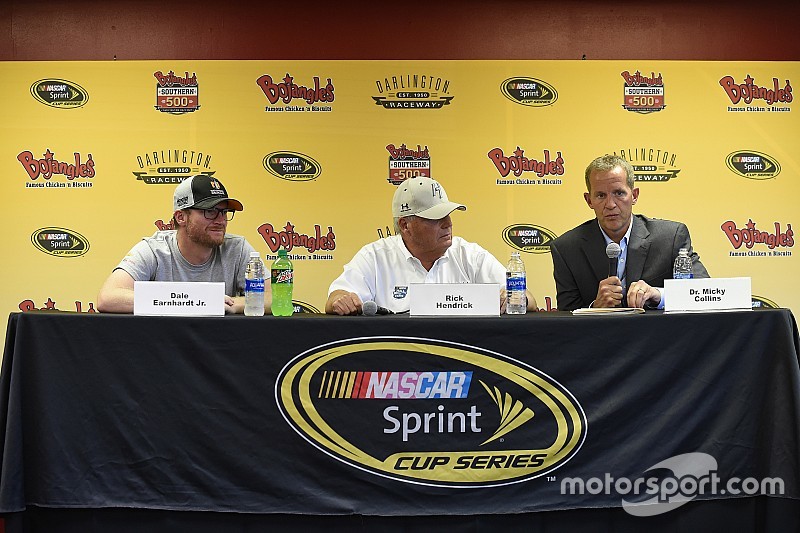 Dale Earnhardt Jr. and his doctor took some time to speak with the media today after it was announced he would sit out the remainder of the season.

Earnhardt has received a lot of free advice about his future in NASCAR, but if Sunday’s news conference at Darlington (S.C.) Raceway showed anything, it was Earnhardt’s desire and commitment to return to racing once he becomes healthy.

Some may argue over the phrase “once he becomes healthy,” because there are no guarantees, which is true. So, why does Earnhardt feel so confident?

Because the doctor leading his recovery told him in the past he would return to normal after a previous concussion, and he did.

And as Earnhardt sits out the remainder of the 2016 to recover from another concussion, Dr. Micky Collins, executive director of the University of Pittsburgh Medical Center’s Sports Medicine Concussion Program, has assured him again of the same result.

“I am positive we will get Dale back to being a race car driver,” Collins told a large group of assembled media Sunday at Darlington. “The only time you run into problems with concussions is when they are not managed appropriately and that’s what we’re doing with this one.

“We’re taking the time that we need and doing the treatments that he needs because we want to make that goal of Dale being able to sustain the normal violent forces and that they would not produce a return of difficulties.

“I think we’re heading in that direction.”

All signs point that way. And his previous first-hand experience with concussions appears to hold special significance with NASCAR’s most popular driver in his belief in how this incident will play out.

“He’s telling me this is possible again and I believe him.”

In fact, Earnhardt’s doctors’ decision not to medically clear him for the remainder of the season may turn out to be the most important in determining what remains of his NASCAR career and his quality of life.

Dr. Collins said the removal of the stress of worrying about when and if he would return to the track this season – actually made Aug. 24 – has already accelerated Earnhardt’s recovery.

“Stress and concussion don’t get along well and we see stress can really exacerbate and worsen things,” Collins said. “I don’t think its coincidence that since we made that decision we are starting to see a lot of progress here that I’m excited about.

“He is feeling better. He can tolerate a lot more. He is having fewer and fewer symptoms and is doing very well. To me, that is the No. 1 goal is to get Dale feeling as normal as a human being. The second goal is Dale becoming a race car driver again.”

Not retiring just yet

Throughout this process, and again on Sunday, Earnhardt has been asked about whether he has considered the possibility of retirement regardless of whether he gets healthy.

He admits it’s something he tends not to dwell on because the first goal – getting back to normal – has not yet been met.

But he certainly doesn’t sound like someone ready to call it quits.

“I have a passion and desire to drive and I enjoy it. I have an amazing team and owner. My heart is there to continue and if my doctor says I am physically able to continue, then that’s an easier decision for me to make,” Earnhardt said.

And if anyone thinks Hendrick is focused on a “Plan B,” he offered this reminder:

“The seat is his and I expect we’ve got a lot of time between now and Daytona,” Hendrick said. “The improvements have been phenomenal and listening to the doctor we are excited about Dale Earnhardt Jr. being in the car at Daytona (next year) – excited about him racing beyond 2017.”

Tony Stewart called to meeting with NASCAR for incident - video