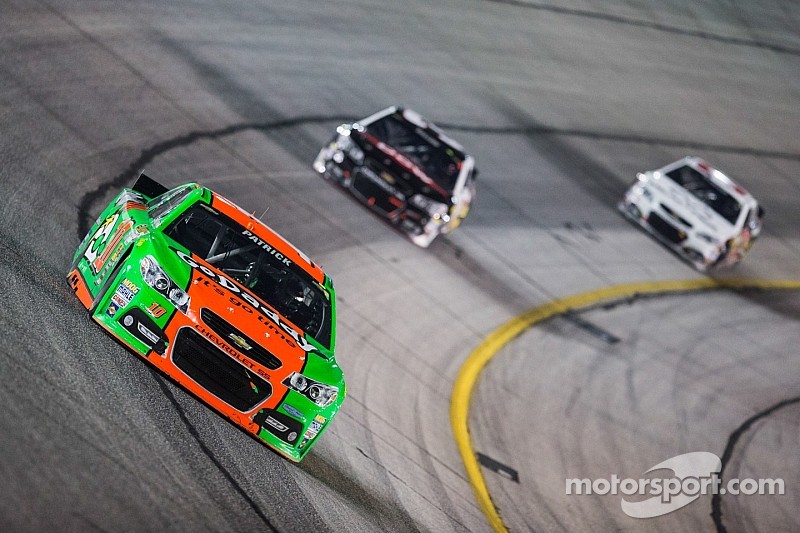 Patrick was fourth on the final restart, dropped to sixth, but managed to come home with her fourth career top-10 and third this season.

“It was a long night,” Patrick said. “Man, that race felt like it was 700 miles. Sometimes when you are running well they feel like that because you are hoping it stays there, keeps going well, and you keep improving and don’t lose it. There were definitely a couple of times late in the race when we fell back. In the middle of the race the GoDaddy car was very good. We took a little step back, and then it came back in the end.”

Patrick’s sixth-place finish is the highest finish by a female at Atlanta. The previous record was held by Janet Guthrie (10th on March 19, 1978). Only a fifth-place result by Sara Christian in a Sprint Cup race on Oct. 2, 1949 at Heidelberg (Pa.) Raceway tops Patrick’s finish. Christian also finished sixth at Langhorn (Pa.) Speedway on Sept. 11, 1949 and Guthrie finished sixth at Bristol (Tenn.) Motor Speedway on Aug. 28, 1977.

Patrick’s good result came with work and a bit of good fortune. She started 27th and got up to 23rd by lap 38, but the leader, Patrick’s SHR teammate Kevin Harvick, was setting such a fast pace that she went a lap down. As soon as she lost the lap, however, the caution came out and, because she was the first car one lap down, she got the lap back via the “Lucky Dog” rule.

She worked her way up to 21st and went down a lap again, but she passed Austin Dillion for 20th on lap 112 to become the first car one lap down. On lap 116 the caution came out and, once again, she got her lap back via the Lucky Dog.

By the halfway point of the race, Patrick worked her way into the top-15 and would stay there for the rest of the night. Her lap times kept getting better, and by the 300-lap mark she was solidly in the top-10.

On lap 324 of the race’s scheduled 325 laps, Kyle Busch and Martin Truex Jr. wrecked in turn two, creating a green-white-checkered situation and setting the stage for everyone to pit for fresh tires for the restart.

Patrick’s crew changed four tires and fueled her car in just 11 seconds, allowing her to restart seventh on lap 330. But the field didn’t even get to turn one before an accident involving Harvick, Joey Lagano, Paul Menard and Jimmie Johnson would bring out yet another caution. Patrick slipped by the accident and was fourth for the second green-white-checkered restart on lap 333. But she dropped to sixth before the checkered flag waved, just 1.5 seconds from her first career victory.

“Tony Gibson just reset everything to where we were when we were running well,” Patrick said. “Obviously the pit stop at the end that was 11 seconds was so good. There were a couple of rough ones in the beginning, but that one made up for it because it put us seventh on that restart, and we had a good line on the inside and didn’t get caught up on the outside. I am just so happy for the team. We have had pretty fast cars for quite a while now and not really great finishes for it. So this is for everybody and GoDaddy.”

Kurt Busch, driver of the No. 41 Haas Automation Chevrolet SS for SHR, finished 13th after leading once for 22 laps.

Harvick, driver of the No. 4 Jimmy John’s Chevrolet SS, led seven times for a race-high 195 laps but finished 19th after being involved in the late accident.

Tony Stewart, driver of the No. 14 Bass Pro Shops/Mobil 1 Chevrolet SS for SHR, finished 41st after being involved in an accident.

Kasey Kahne won the Oral-B USA 500 to score his 17th career Sprint Cup victory, his first of the season and his third at Atlanta.

Matt Kenseth finished .574 of a second behind Kahne in the runner-up spot, while Denny Hamlin, Jimmie Johnson and Carl Edwards rounded out the top-five. Patrick, Ryan Newman, Kyle Larson, Aric Almirola and Greg Biffle comprised the remainder of the top-10.

There were 10 caution periods for 56 laps, with five drivers failing to finish the 335-lap race, which was extended due to a green-white-checkered finish.

The next event on the Sprint Cup schedule is the Federated Auto Parts 400 on Saturday, Sept. 6 at Richmond (Va.) International Raceway. The race starts at 7:30 p.m. EDT with live coverage provided by ABC beginning with its prerace show at 7 p.m.

Tony Stewart's "homecoming' was a welcomed return with an unhappy ending