Daytona Beach, Fla. – Danica Patrick made history today when she became the first female to win a NASCAR Sprint Car Series pole and she did it for NASCAR’s premier race, the Daytona 500.

Her qualifying speed on a cool windy day was 196.434 miles per hour and she is joined in the front row for the Daytona spectacle by Jeff Gordon, who clocked a lap speed of 196.292 mph.

...we have a lot more history to make.

For females, Janet Guthrie set the previous standard in 1977 when she started ninth twice. For the Daytona 500, Guthrie held the mark with an 18th in 1980. This is Patrick’s second NASCAR pole, having taken the Nationwide pole at Daytona a year ago.

Being in the headlines is commonplace for the colorful driver and today’s fete should showcase her talents and personality even more.

The pole winner drove the brightly colored GoDaddy Chevrolet field by Stewart-Haas Racing. And her teammates are co-owner Tony Stewart and Ryan Newman; those two qualified fifth and fourth, respectively, showing how well prepared the team is.

“I am excited and relieved,” she said. “90 per cent falls on (crew chief) Tony Gibson, and maybe 10 per cent of me. I just have to think about running smooth and not letting the car bind up. I think it shows how well prepared this team is, how strong the Hendrick engines are and how good the new Chevy SS is. It is amazing how much effort goes into a car for the Daytona 500. It is nice that all the hard work can pay off, and that we can give ourselves that opportunity to lead the pack down to the line for the start of the Daytona 500.”

While the wind affected many cars, Patrick said she didn’t notice it. “Coming off turn 2, I let the car out – maybe it was the wind – and ultimately at end of day, everything happens for a reason. While coming in to today, many thought I might get the pole and I wondered whether I was ready. But now I am comfortable and cool with what has happened.” 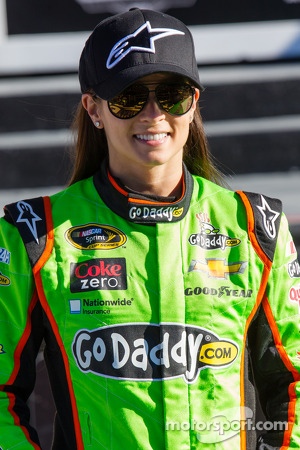 Asked if the limelight bothers her, she said, “When the pressure is on and the spotlight is on, I feel like it becomes some of my better races and results. I don’t know why that is but I am grateful for it. Thanks to my parents and the genetics. I just understand when you put in a lot of hard work before you go out there, you can have peace of mind of letting it happen.

“For a lot of reasons, I have been lucky enough to make history and be the first woman to do many things, and I hope I don’t stop doing that as we have a lot more history to make.”

She admits she has a lot to learn and hopes to learn from the other drivers. “I am a rookie and learning as much as I can for 499 miles, the last 10 laps or whatever, so we can be in position to keep rolling and we have a chance for the win.”

Gibson added, “It is a team effort and like I told Danica it is more than 10 per cent for the driver. We gave her a good product, and she went out and did the rest – more like a 50/50 effort to me.”

“I am really proud today more than anything,” Stewart said. “This was one of the most difficult winter’s ever for all the teams, getting prepared to come down here. I am very appreciative of the effort by our team. I am very appreciative of the people at Mobil 1; they worked just as hard on the lubricant side as we do on the cars.” He indicated Mobil 1’s involvement may have made the performance difference.

Regarding Patrick, Stewart added, “She did such a really good job of carrying speed off from turn 2. She made all of her time up down the backstretch and carrying that speed is the key to that. All three of us ran great laps, but she did something a little different. It is easy to come down here on your first or second year and scrub speed off. Two years ago I said she runs such a smooth line, which is what you have to do to carry speed.”

Stewart said her pole was a huge accomplishment, and there’s only one person who can be the first to do anything. “I have a huge amount of pride in what she did, doing so on her second trip here in a Cup car,” said the co-owner. “I think Danica really has two boyfriends; she has Ricky (Stenhouse Jr.) and Tony Gibson. They are all but holding hands in the shop, and that is good for the team. Having three teams with drivers and crew chiefs getting along and happy to be paired up is great for the team.” 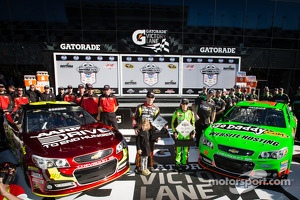 Gordon will start alongside Patrick, and he will be driving the Drive to End Hunger Chevrolet. The former champion has qualified for the front row three times previously.

“This is big for us to be on the front row at Daytona, an accomplishment in and of itself,” he said. “A lot of effort went into those two laps, and we are here to win the Daytona 500. And this is a great step for accomplishing that goal, and it is great to be part of history with Danica being on the pole. We know how popular she is and what she has done for our sport.”

Discussing his qualification run, Gordon said his car fell off the jack-stand in the garage earlier today, and it had to be repaired prior to time trials. And that incident came on the heels of earlier tests and practice runs that didn’t go well. “I didn’t think we had a shot at the pole,” he added. “But when I started the lap, I thought this is going to be better, even though the gusts (of wind) were huge today. Yes, I am surprised and I didn’t think we would be that close. Had I known I might have driven across the track apron, but I am thrilled to be on the front row.”

Stewart and Kasey Kahne were next in the speed runs with Denny Hamlin and teammate Kyle Busch next in line. They drove the fastest of the Toyotas.

Joey Logano and Matt Kenseth rounded out the top-10 qualifiers.

45 cars took a time-trial run and 43 will start the “Great American Race.”

Only Patrick and Gordon are locked into the starting field for Sunday’s race with the remainder of the starting positions to be determined through the finishes in Thursday’s Duel races. The highest 15 finishers in each Duel will earn a starting spot and positions 33-36 will go to the four fastest cars from qualifying that have not already earned a spot. Positions 37-42 will be provisional positions with the 43rd position assigned to any car owner who has the most recent eligible past Sprint Cup champion, who did not make the field for other reasons.

The track will be closed Monday and Tuesday and reopen with practice on Wednesday, to be followed by the two Duel events on Thursday.