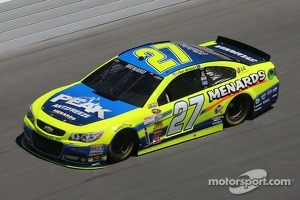 Daytona 500 Look Back ... After starting 10th in the 56th running of the Daytona 500, Menard ran most of the race in the top-10 and top-five leading three times for 29 laps. However, after getting collected in a multi-car crash on lap 145 that forced him to the garage for repairs, he managed a return to action for a 32nd-place finish.

Race Rewind ... In his last appearance at PIR, Menard started the No. 27 Chevrolet SS from 16th place and took the checkered flag in the 20th position.

What are your thoughts on racing at Phoenix International Raceway:

"I always look forward to going to Phoenix International Raceway because the size and layout of the track make for some fun racing. After coming from a place like Daytona International Speedway last weekend where the aero package is everything, its different racing at PIR because it doesn't mean as much. I'm looking forward to a good race because the new surface has aged a little bit more than our last visit. We've ran well at Phoenix in the past and I'm looking for the entire No. 27 Pittsburgh Paints/Menards team to have a great run. Speaking of the track, I would like to congratulate the entire facility on their 50th anniversary of operation."