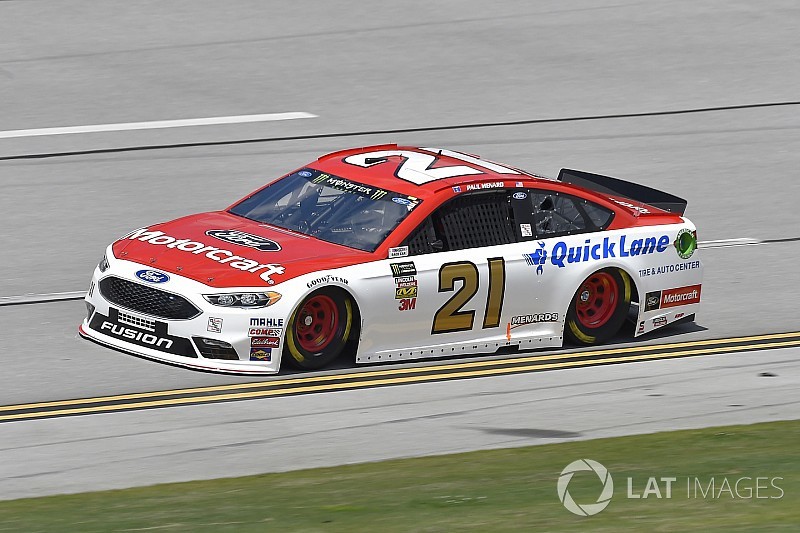 Paul Menard took the lead with four of 55 laps remaining and held off Joey Logano to earn the Stage 2 victory at Talladega (Ala.) Superspeedway.

Following pit stops during the break between Stages 1 and 2, Brad Keselowski came off pit road first and retained the lead when Stage 2 went green on Lap 62. He was followed by Logano and Menard.

Byron got around Keselowski with a push from Jamie McMurray and moved into the lead shortly after the restart.

On Lap 64, Keselowski retook the top spot with a push from his teammate, Logano.

Three laps later, another group of drivers elected to make an early round of green-flag stops to ensure they had enough fuel to make it to the finish of the stage.

Keselowski, Daniel Suarez and Stenhouse were all too fast on pit road during their respective stops and had to make a pass-thru penalty. Alex Bowman was also penalized for speeding on the exit to pit road.

“I knew I was doing it,” Keselowski said over his team radio. “Couldn’t do anything about it.”

Following those stops, Matt DiBenedetto took over the race lead.

On Lap 72, Erik Jones moved up into McMurray on the exit of Turn 2 which triggered a multi-car accident that also collected Kyle Larson, Trevor Bayne and Martin Truex Jr.

“I believe I got down on the apron a little bit and after that it took off on me. I feel pretty bad for ruining everyone else's day,” Jones said outside the infield care center. “These cars are really challenging to drive right now."”

During the caution, DiBenedetto elected to pit and Logano inherited the lead when the race returned to green with 32 laps remaining in Stage 2. He was followed by Menard and Kurt Busch.

With 20 laps remaining in Stage 2, Logano continued to hold a lead over Menard, followed by Kurt Busch, Hamlin and Blaney.

On Lap 97, Hamlin faked a move to the outside of Logano, then dove to the inside to take the lead for the first time in the race.

With 10 to go in Stage 2, Hamlin maintained the top spot while fending off challenges from Menard and Kurt Busch.