All three Team Penske drivers found themselves low on fuel in the closing laps at Michigan International Speedway. 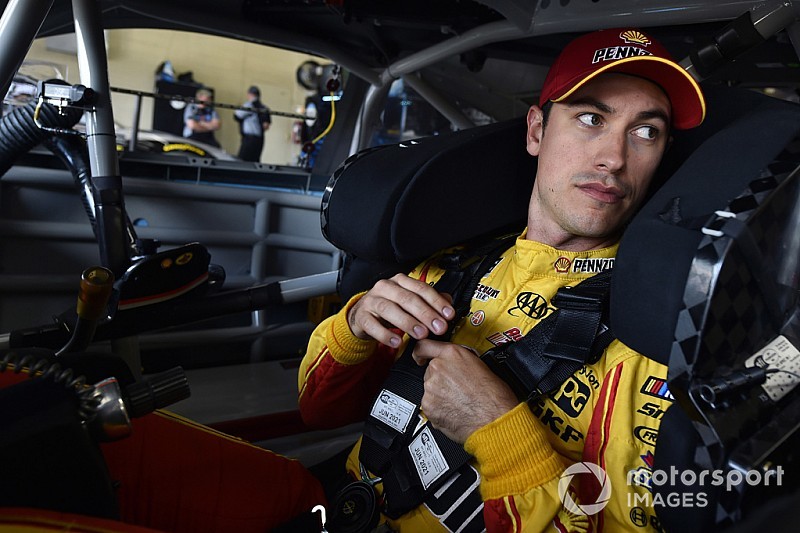 There was a point in the final run of Sunday's race where Team Penske was running 1-2-3, but you wouldn't know that from the results table. They led a combined total of 121 of 200 laps as well, but ultimately failed to get a single car inside the top-15 as they ran out of fuel.

Both Brad Keselowski and Joey Logano were forced to pit for a splash of fuel while Ryan Blaney ran out at the end of the race.

Keselowski led a race-high 66 laps, later rebounding from a cut right rear tire and a spin, but it was all for naught as he didn't have enough gas in the tank at the end. He pitted with 11 laps to go, relegating him to a 19th-place finish.

“Man, I want this one so bad," said Keselowski, having yet to win a Cup race at his home track of MIS. "We got that flat tire early on and we recovered and got up to third there in the late stages and then we just ran out of gas. That is just the way it goes sometimes.”

His teammate Logano found himself in control of the race after taking the lead on the final restart. Eventual race winner Kevin Harvick snatched the lead away with less than 20 laps to go while the driver of the No. 22 faded.

He came to pit road with just four laps remaining, giving up the second position on the track. “I needed more gas. The Shell car isn’t supposed to run out of gas," he said after the race, finishing 17th.

"The positive is we were way better than we were on Friday and Saturday. The negative is that we almost won the race but ended up finishing 17th. You win some you lose some. If the caution comes out we would have been in good shape but it stayed green, and that is it. That is the gamble. We took the gamble and it didn’t pay off. Pocono we played it the other way and the caution came out. That is two races and we played it wrong both times.”

Blaney tried to make it to the very end and was in position to score a top-five, but ran out on the final lap after the team failed to get it full on his last stop. He fell all the way back to 24th, the last car on the lead lap.

“I had a really good car. Our Mustang was fast, especially later in the race. I just got off pit road too early and we ended up running out of gas. It is easy to second guess those types of decisions after the race, but I didn’t second guess anything at the time.

"Just the way it shakes out sometimes.”

Denny Hamlin: "The fastest car won the race" at Michigan

Rodney Childers cashed in on second chance at Michigan win