He spent his early career racing and winning at PIR

STATESVILLE, N.C. (November 5, 2013) - Phoenix International Raceway may be 2,000 miles from his house in North Carolina, but the racetrack in the desert feels like home to David Gilliland. The driver of the No. 38 Long John Silver's Ford is a west coast native and spent several years racing the one-mile oval in Avondale, Ariz., earlier in his racing career. 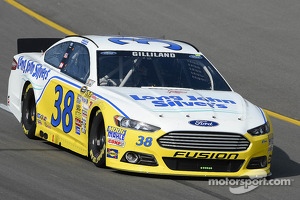 Those days included a trip to the track's Victory Lane back in his K&N Pro Series West racing career in a race he started from the pole (2005). Even though Gilliland is now an eight-year Sprint Cup Series veteran and North Carolina resident, traveling back to Phoenix still feels like a homecoming of sorts.

The No. 38 team aims to finish what they started in the March Sprint Cup race at the track, where Gilliland was running just outside the top 20 when he blew a tire and hit the wall, ending his day early.

"The new configuration at Phoenix is different for sure. I grew up racing out there, so I raced a lot of times on the old-style configuration. Phoenix is always a special track for us to go to. We won a race from the pole there back when I was running the West Series. So I've got a lot of good memories at that track. And we always have a lot of friends and family out there who come out and show their support.

"Earlier in the year when we went out there, we were running really well and then we had a tire issue. We're looking forward to going back there and hopefully finishing what we started at the beginning of the year. We've certainly learned a ton and evolved the cars a lot since then, so I know we can go back even better.

"The new configuration isn't bad. The old Phoenix had more character, but the new Phoenix isn't bad. As you get used to it and run on it, you start to learn its characteristics and traits and get them to work for you. It's what everybody has to do. You've got 43 teams that are learning it and adapting to it."

Ragan poised to bounce back at Phoenix